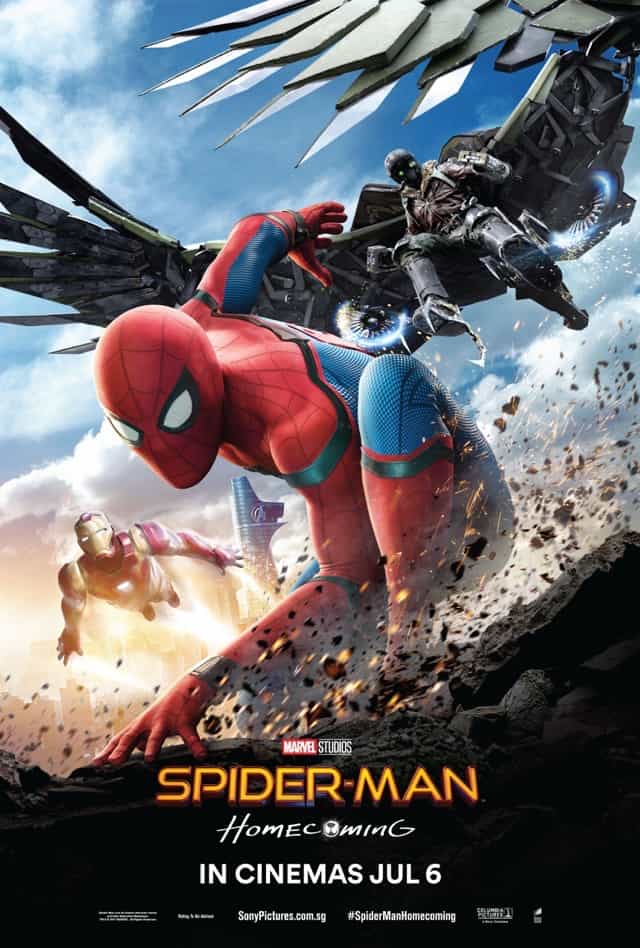 In Captain America: Civil War, we were introduced to the Marvel Cinematic Universe’s (MCU) version of Peter Parker/Spider-Man (Holland). After the events of that film, Peter returns home and having been in the thick of a big superhero battle, wants more excitement. A high school sophomore, Peter juggles school work, hangs out with his best friend Ned (Batalon), nurses a crush on his Decathlon team captain Liz (Harrier), weathers the put-downs of bully Flash (Revolori) and tries to keep his Aunt May (Tomei) from discovering his secret identity. In the meantime, Spider-Man tangles with Adrian Toomes/The Vulture (Keaton), a former salvage worker with a grudge on Tony Stark/Iron Man (Downey Jr.), Peter’s mentor. Toomes’ associate Phineas Mason (Chernus) has developed various gadgets using alien and other technology illegally gleaned from the aftermath of various Avengers battles. Stark thinks Peter is acting recklessly, and Peter must prove he is worthy of not only the suit that Stark has created for him, but of the mantle of a superhero.

The Spider-Man film rights are something of a tangled web: after The Amazing Spider-Man 2 under-performed and a planned franchise collapsed, Sony Pictures leased the film rights for the character to Marvel Studios. This makes Spider-Man: Homecoming technically a Sony film, but Spider-Man can now co-exist with the other heroes in the MCU – as he should be able to.

Jon Watts, a relatively fresh director who impressed Marvel execs with his film Cop Car, carves out a niche in the MCU that fits Homecoming perfectly. We’re reminded that this film takes place in a larger universe, but Homecoming doesn’t busy itself with excessive franchise set-up work – which was arguably the downfall of The Amazing Spider-Man 2. Instead, Watts strikes a fine balance between the superhero action and the high school movie aspects, crafting something with a scope and scale that doesn’t exceed his grasp. These movies can get bloated, but despite a large cast of characters, Homecoming remains buoyant.

We called Guardians of the Galaxy: Vol. 2 the funniest MCU movie yet. Its reign is short-lived, as Homecoming is a worthy challenger to the title. Those Captain America public service announcement videos are a hoot. Despite a screenplay which is credited to three pairs of writers, the film doesn’t feel cluttered or scattershot. The central theme is that of responsibility – while this certainly isn’t an alien concept to the Spider-Man movies, the film doesn’t just say the word “responsibility” a bunch of times. While this is obviously a big-budget tentpole movie, there’s a certain homespun feel to it. Thankfully, this isn’t one of those teen-aimed movies made by people who obviously don’t get teenagers. The bits of Peter dealing with student life and the parts of the film in which he’s Spider-Man don’t feel like they come from disparate movies.

Homecoming boasts some quality set-pieces, with the central bifurcated Staten Island ferry sequence being the standout. The Washington Monument scene provides a judicious change of pace from the New York setting. While the visual effects work is mostly excellent and the Vulture’s wings look particularly awesome, there are some moments that lack polish. The computer-generated effects in all the previous Spider-Man films haven’t aged spectacularly, and while that’s less egregious here, there are still times when the digital double for Spider-Man himself looks too cartoony. Since Spidey’s moves are more elaborate than the standard ‘swing from building to building’ routine, the weaknesses of the CG Spidey show up a little more obviously.

Holland won plenty of fans over with his turn as Spidey in Civil War, and gets the chance to further develop the character and come into his own. Holland effortlessly essays Peter’s wide-eyed enthusiasm at the slightest thing, which probably echoes the actor’s own awe at being a part of the blockbuster franchise. There’s an earnestness to Peter and he’s just the right shade of flawed. Getting to play with a high-tech suit is fun, but when crime-fighting encroaches on Peter’s school and social life, it’s a burden he must shoulder. Holland’s physicality is a key factor to him being as good a Spider-Man as he is. However, as expected, most of the fighting and acrobatics seem to be done by the afore-mentioned digital double.

MCU villains get a bad rap, so it’s a good thing that the Vulture is one of the better ones. Keaton is ideal casting, and while he does have fun with the role, he’s intimidating without doing too much. The Amazing Spider-Man 2 suffered from a surfeit of one-dimensional, maniacally cackling villains. The Vulture’s motivations are logically laid out, and the idea of a regular guy who becomes a villain because the opportunity presents itself and as a means to a better life works as a foil against Spider-Man, the regular kid-turned-superhero. While some might worry that there are additional villains, the two Shockers (Woodbine, Marshall-Green) and the Tinkerer remain firmly in the background, with Homecoming avoiding a case of villain overload.

The supporting cast is fun, with Batalon making for an excitable, loveable sidekick to Holland’s Peter. The normally-glamorous former Disney Channel star Zendaya relishes playing the kooky, acerbic Michelle. Harrier’s Liz Allan fulfils the role Mary Jane normally would, as the unattainable crush Peter admires from afar. In one of several departures from the source material, Revolori’s Flash Thompson isn’t the traditional musclebound meathead, but is instead a snob who drives about in a fancy Audi.

While the promotional materials were heavy on Iron Man, Downey Jr.’s presence doesn’t overwhelm the film, which is squarely Spider-Man’s to carry. It’s apt that Tony step into the mentor role, and this signifies how far the MCU has come – it’s already been nine years since the first Iron Man film. And yes, the film is acutely aware that Marisa Tomei is considerably more attractive than the traditional grey-haired, hunched-over Aunt May as drawn in the comics. The montage in which she helps Peter prepare for prom is a sweet, low-key moment.

While Homecoming doesn’t reinvent the wheel, and doesn’t take the kind of risks with the comic book movie genre that we’ve seen from Logan and Wonder Woman earlier this year, it doesn’t have to. There’s a comfort factor in seeing Spider-Man back on the big screen, and the filmmakers demonstrate a keen understanding of what makes him tick, and of the character’s enduring appeal. Stick around for a stinger after the (extremely eye-catching) main-on-end titles, and another at the very end of the credits.

Summary: Like the high-tech suit that Tony Stark creates for Peter Parker, this Spider-Man reboot is spiffy but sufficiently familiar. Homecoming is tonally assured and energetic, with Holland making for an eminently personable Spidey.