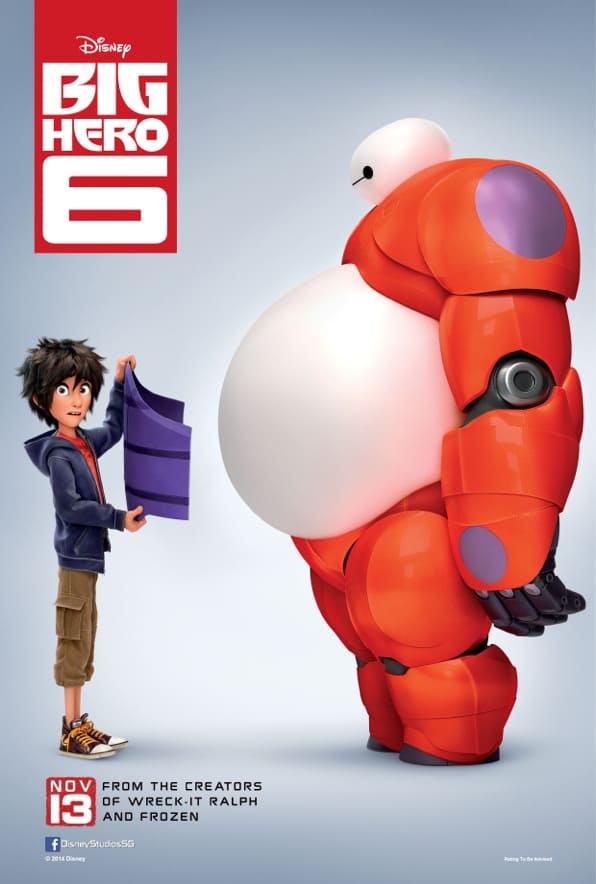 In the ten years since Pixar gave us The Incredibles, what is arguably still the best superhero movie ever made, Disney acquired Marvel – a canny business decision which gave the animation studio access to a host of other superheroes and villains. Of the entire pantheon of Marvel characters, then, why did Disney choose the deeply obscure Big Hero 6 for its first animated adaptation? Precisely because of its obscurity, as it turns out. As Marvel itself proved with the astounding box-office success of Guardians Of The Galaxy this summer, there’s just as much – if not more – potential to breathe new, refreshing life into relatively unknown characters. Disney’s version of Big Hero 6 may barely resemble its grimmer comic-book counterpart, but is smart, sweet and thoroughly inventive on its own considerable merits.

Budding robotics prodigy Hiro Hamada (voiced by Ryan Potter) spends most of his free time inventing unbeatable bots to make a quick buck in the underground fights that take place all over San Fransokyo. He finally settles down to invent something groundbreaking when his brother Tadashi (Daniel Henney) gives him a sneak peek into the Institute of Technology’s renowned robotics programme run by Dr. Robert Callaghan (James Cromwell). But, just as it seems that Hiro’s bright future is set, disaster strikes and he is left with only Baymax (Scott Adsit), a huge, amiable marshmallow puff of a robot dedicated to providing the very best health care, to remind him of his brother.

For better or worse, the film chooses to focus firmly on Hiro and the unlikely best friend he finds in a robot with two dots and a line for a face. In most of the ways that count, it’s a smart move: it ensures that the larger-than-life action and off-kilter humour of Big Hero 6 is grounded by plenty of very real emotion and heartache. Hiro’s loss is acute and deeply-felt, and it’s drawn with such sensitivity that it will resonate with anyone who’s lost someone near and dear.

The relationship between boy and cuddly giant robot is also delightfully drawn. It’s both charming and bittersweet to watch as Baymax tries to heal Hiro’s grief, a wound that won’t respond to the medication or antibiotics in his first-aid kit. To do so, the robot with a mochi for a head walks through traffic, wraps himself around the boy to break a spectacular fall to the ground, and basically deigns to become Disney’s version of Iron Man. In the process, Baymax becomes the breakout star of the year – a blank-faced, seemingly expressionless droid who will have you laughing, weeping and rushing out to buy toy versions of him to be placed under the Christmas tree.

If anyone gets short shrift, it’s the rest of the people who make up the superhero team of the film’s title. The remaining four members of the team, all friends and colleagues of Tadashi – quirky chemistry whiz Honey Lemon (Genesis Rodríguez), tough-as-nails adrenaline junkie GoGo Tamago (Jamie Chung), neurotic laser-expert Wasabi (Damon Wayans Jr.) and laidback rich boy Fred (T.J. Miller) – are sketched out well enough that they can provide a few punchlines and witty one-liners. But they’re only barely involved in the emotional arc of the story.

At least it’s an understandable oversight – Big Hero 6 is packed with so much detail and depth that it’s no wonder someone had to take a backseat. The film not only finds a surprising twist in the story of its antagonist, money-grubbing tech entrepreneur Alistair Krei (Alan Tudyk), it also creates a buzzing, busy world quite unlike anything that’s been put onscreen before. Hiro’s world of San Fransokyo is a happy whirlwind of cultures – Japanese lanterns adorn the cable cars that trundle through the streets, and fortune cats beckon from the awnings of the café belonging to Hiro’s Aunt Cass (Maya Rudolph). There’s even an Easter egg or two tucked into the film – particularly in a hilarious closing-credits sequence that cheekily tips its hat to the larger Marvel Cinematic Universe.

Fans of Marvel’s many comic-book properties were no doubt worried when Disney acquired the studio in 2009. Would Marvel’s grittiest superheroes and villains be given Disney’s trademark cute-ifying treatment? Would their dark, bitter backstories be lost in the translation to the silver screen? At first glance, Big Hero 6 seems to confirm their worst fears. But, even if it bears scant resemblance to the comic book from which it originated, there’s still plenty to enjoy in this punchy, endearing take on the superhero film. In its own way, it doesn’t shy away from difficult topics like death, grief and the extent one can and should go to seek revenge. That it does so while led by one of the most adorable robots ever brought to animated life is icing on the cake.

Summary: A smart, refreshing take on the superhero film with a heart as big as its breakout robotic star.