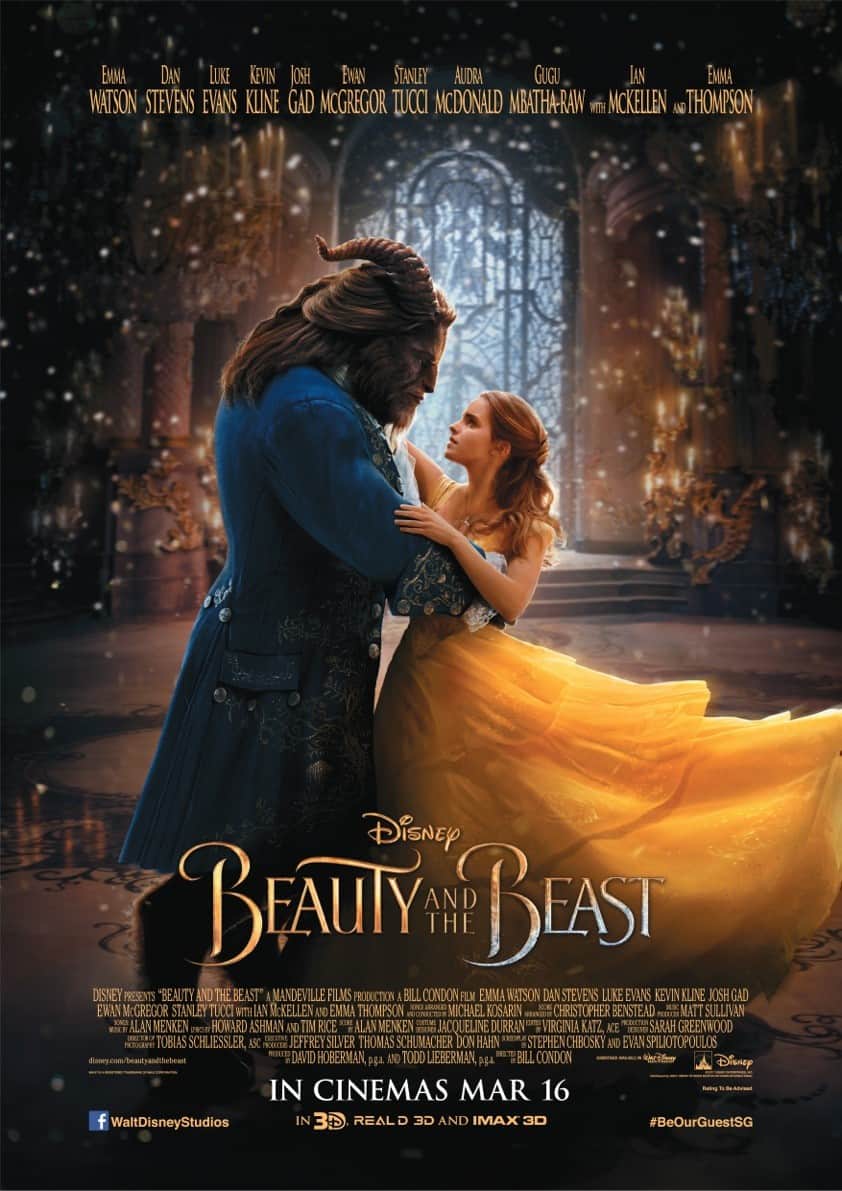 Adapting Gabrielle-Suzanne Barbot de Villeneuve’s original French story about a beauty and her beast is no easy task. In the wrong hands, this romance between a girl and her captor could easily come across as creepy – Stockholm Syndrome parading as a fairy tale. Disney managed to pull it off in 1991: its sublime animated version, with its tender heart and gorgeous music, has rightly become a classic. 25 years later, has the studio managed to capture lightning in a bottle again, this time in live-action format?

Well… not quite. To be fair, this brand-new incarnation of Beauty And The Beast, directed by Bill Condon, has a great deal going for it. It makes a good case for updating the tale with more modern sensibilities. The film is beautifully performed and designed, and there’s plenty of fun (and nostalgia) awaiting fans of its animated predecessor. But it never feels quite as effortless or natural in telling its story. While there is magic here, it’s tough to shake the feeling that it’s engineered, not organic – that it grazes rather than grabs the heart.

The film centres on Belle (Emma Watson), a bookish, resourceful young lady who’s never really fit into her little French village. She hankers for adventure – but gets more than she bargained for when her father (Kevin Kline) stumbles into a forgotten castle and becomes a prisoner there. After trading places with her dad, Belle gets to know the inhabitants of the castle: a surly, fearsome Beast (Dan Stevens) and a host of living household appliances and furniture, all of them living in fear that they will never be free of the curse that has robbed them of their humanity.

On its own merits, Beauty And The Beast is a decent effort. Condon’s film is the Hollywood blockbuster at its most efficient, from its photo-real fantasy castles to splashy musical numbers teeming with life and colour. The screenplay, by Stephen Chbosky and Evan Spiliotopoulos, is a canny adaptation of familiar material, particularly when it comes to adding layers to its characters. Belle has more agency in ways big and small – she’s the one in control even when she (voluntarily) becomes the Beast’s prisoner and, in a small but important scene, she shares the gift of independent thinking by teaching a village girl how to read.

Similarly, the many relationships in the film are given welcome depth. Belle and the Beast find common ground in books and feeling out-of-place, even in the places they call home. We’re furnished with hints as to why the household servants – including suave candlestick Lumiere (Ewan McGregor), jittery clock Cogsworth (Ian McKellen) and motherly kettle Mrs. Potts (Emma Thompson) – are more invested in breaking the curse that befell them. LeFou’s (Josh Gad) devotion to the pompous Gaston (Luke Evans) goes, quite logically, from subtext to text, though in a way that hardly warrants the firestorm of controversy that has erupted in conservative circles over Disney’s ‘gay agenda’.

That said, other aspects of this remake yield more mixed results. The Beast’s very real, very human eyes provide emotional connection and depth in a way that animation can’t fully approximate. But burying Stevens beneath layers of CGI and prosthetics also means that the Beast can occasionally come across as a stiff, oversized teddy bear, lacking the fluidity of expression of his animated counterpart. The same goes for the household servants: ironically, efforts to make them more ‘realistic’ end up bleeding them of life and personality.

It’s the same story with the film’s music. Some of Alan Menken and Howard Ashman’s iconic original numbers are thoughtfully re-imagined: Be Our Guest is a joyous explosion of camp colour, featuring welcome nods to movies like Cabaret and Singin’ In The Rain; and Gaston morphs into a lively bar-storming number that practically demands applause at the end.

But the new songs, penned by Menken and Tim Rice, are more nice than necessary. How Does A Moment Last Forever is lovely but lacks impact. Evermore – a new anthem for the Beast – will no doubt become a cabaret standard but is badly served in the context of the film: it feels overwrought and a bit silly, lessening rather than heightening the dramatic tension at that particular moment.

Performances across the board are good, as you would expect from a cast of this calibre – though it’s hard not to wish for accomplished performers like Thompson, McKellen and Broadway legend Audra McDonald (playing the part of an operatic, narcoleptic wardrobe) to be better served by both script and special effects. Watson, who has proved a better advocate than actor in recent years, is a perfectly credible (though hardly riveting) Belle. Stevens does a decent job with a challenging part, while Evans convincingly conjures up both swagger and menace.

It’s evident in every frame that everyone involved in Beauty And The Beast worked mightily hard to prove that transforming one of Disney’s most iconic movies into a live-action extravaganza is worth the effort. They don’t always pull it off: the film gets about as many things wrong as it does right, and it most certainly doesn’t surpass the animated classic in quality. But it tells a familiar tale well enough – enough, one suspects, to win over fans old and new.

Summary: A good, though far from great, adaptation of this tale as old as time.