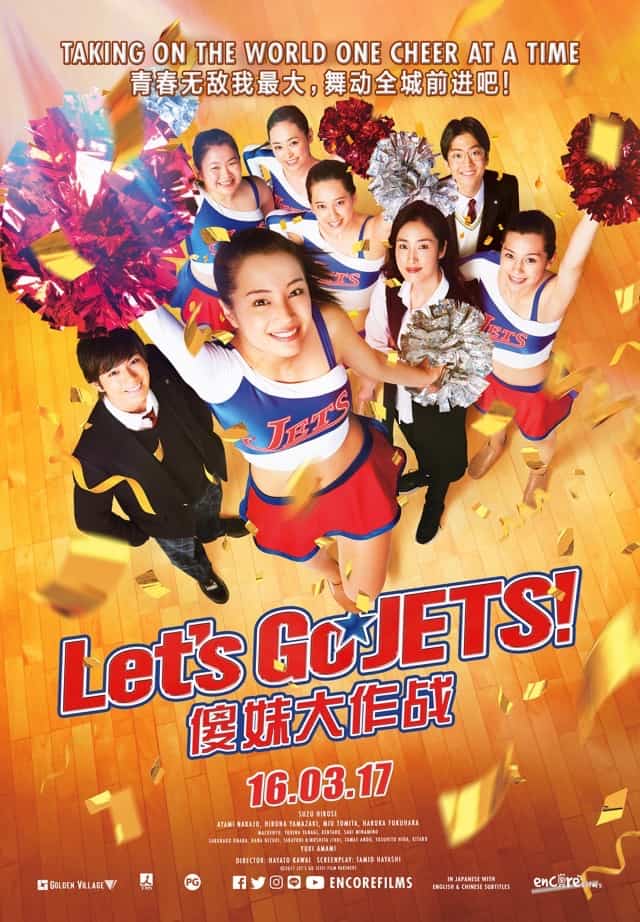 Let’s Go, Jets! is the ultimate dirty old man fantasy. What else would you call a movie that succeeds in combining the American cheerleader and the Japanese schoolgirl into one perfect Lolita? For the rest of us without any weird fetishes, the film still manages to be a fluffily enjoyable outing thanks to some offbeat quirkiness. There’s virtually nothing else that distinguishes it from a dozen other coming-of-age/dance flicks. Well, except cheerleading Japanese schoolgirls.

As it turns out, Japanese schoolgirls who prance around in short skirts and pom-poms really do exist: Let’s Go, Jets! is based on the true story of the cheer dance team from Fukui Commercial High School, who swept to victory at the 2009 National Dance Alliance National Championship in the US (this is not a spoiler). It is highly unlikely, however, that any of the film’s main characters bear any meaningful resemblance to their real-life counterparts. Cute-as-a-button Hikari (Hirose) opts to join the cheer dance club in her freshman year to impress potential paramour Kosuke (Mackenyu). What she doesn’t know is that the club is presided over by a demon of a teacher dubbed Mrs. Hell (Amami) by the whole school. Mrs. Hell proceeds to whip Hikari and her friends, including overachiever Ayano (Nakajo) and glum hip-hopper Yui (Yamazaki), into shape, with the looming US Dance Nationals as the Holy Grail of a three-year-long quest.

Along the way, Hikari and company experience trials, tribulations, heartbreaks and elusive joy, but the point is that the plot is so formulaic you can practically see the twists coming from a mile away. Somebody’s going to drop out, somebody’s going to get injured and many people are going to get humiliated (these are not spoilers either). This is why it’s hard to believe that much of the sweat, blood and tears invested by the real-life team got translated to the big screen. Everything goes down just a little too well, and what could have been an inspiring tale of persistence against adversity becomes yet another twee homage to movie friendship.

Helping to blow the friendship quotient way out of proportion is the fact that Let’s Go, Jets! really doesn’t have that much cheer dancing, in spite of ostensibly being a cheer dancing film. Sure, you see the girls practicing all the time, but that’s not the same as watching them put on a complete performance, which only happens once over the course of, depending on your point of view, three years or 121 minutes. There is actually one scene where all the cinema audience gets to see of the performance is the backstage action. Cheer dance isn’t an easy sport to master (the film manages to convey that at least), so untrained cast members may have had difficulty picking it up, but one would expect more effort and resources to have gone into choreography even if that were the case. This is a puzzling shortfall in a film whose Japanese title is literally Cheer Dance.

What the film does have going for it though, is that silly brand of humour that only Japanese productions seem to get right. Hikari, Ayano and Yui may all conform to particular stereotypes, but at least they’re inoffensive, crowd-pleasing stereotypes. Some of the more cringe-worthy moments are offset by moments of genuine comedic gold, most of which involve the irrepressible supporting cast.

Suzu Hirose is an adequately kawaii leading lady, even if she comes across as slightly shrill at times, but the true standout among the young cast is the 20-year-old Ayami Nakajo. Her character Ayano is supposed to be the sole member of the club who already has cheer dancing experience, so she has more scenes than anyone else in which to appear to possess a modicum of skill. Nakajo succeeds admirably at this task. Yuki Amami as the dictatorial Mrs. Hell is another highlight. A veteran actress who has played countless eclectic roles in marquee J-movies, Amami brings gravitas to a film otherwise devoid of depth; such is the calibre of her performance.

Mostly insipid with a few redeeming points, Let’s Go, Jets! doesn’t quite become the poster child for cheer dance that it sets out to be. For a far superior movie featuring dancing Japanese girls, you’d be well-advised to check out 2006’s award-winning gem Hula Girls.

Summary: Doesn’t quite achieve warp speed, but is saved from a fiery mid-flight explosion by humour and Yuki Amami. Hooray for cheerleading Japanese schoolgirls!