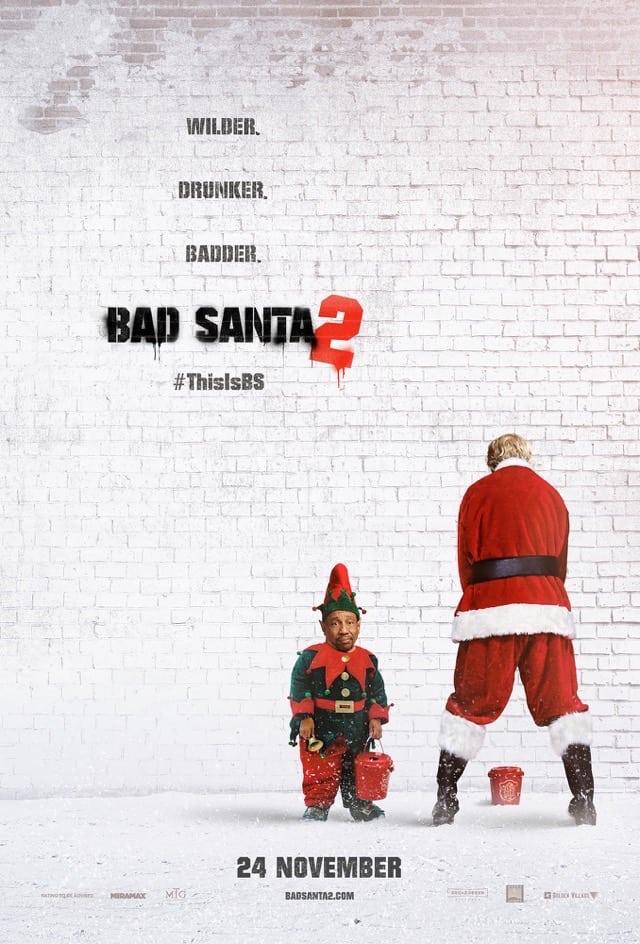 Ho ho f***ing ho – everyone’s favourite chain-smoking, alcoholic, swearing, sex-addicted Santa is back. Willie Stokes (Thornton), a ne’er-do-well conman, thinks his days dressing up as Santa Claus with his accomplice Marcus Skidmore (Cox) playing the part of an elf are over. The duo used to rob department stores at Christmas, but after Marcus shot Willie eight times in the back, it seemed unlikely that their partnership would resume. Years later, Marcus ropes Willie in to steal from the coffers of Regent (Hansen), the corrupt head of the charity Giving City. Regent’s wife Diane (Hendricks), who oversees the charity’s operations, catches Willie’s eye. Willie is forced to work alongside his estranged mother Sunny (Bates), a hardened criminal who has orchestrated the heist. The trio’s plans are disrupted by Thurman Merman’s (Kelly) arrival in Chicago. Willie won’t admit it, but he’s grown fond of the kid, whose father was imprisoned and whose mother died. As Willie spends Christmas with this peculiar ‘family’, the ruse is in danger of being uncovered.

Bad Santa has become a cult comedy, an ode to bitter self-destructiveness that serves to counteract saccharine holiday fare. Bad Santa was shocking and irreverent, and suffice it to say, audiences are harder to get a rise out of 13 years later. The idea was first mooted around 2009, and Bad Santa 2 has finally come to fruition. Bad Santa 2 doesn’t try to top its predecessor in the offensiveness stakes: the language, political incorrectness and bawdiness are presented matter-of-factly. Director Mark Waters of Mean Girls fame replaces the first film’s director Terry Zwigoff. Johnny Rosenthal and Shauna Cross’ screenplay is as salty as one would expect, with humour and dialogue that keeps in line with the first film’s tone. The overarching plot revolving around robbing the crooked leader of a charity gives the film enough structure for the jokes to be built on.

Willie Stokes has become a signature character for Thornton, and nobody quite plays surly like he does. While this is by no means a subtle movie, there’s a degree of nuance that Thornton brings to Willie that enriches the character. Things do get repetitive – there are only so many ways one can be belligerent. However, Thornton’s attempts to find the barely perceptible flicker of light deep within Willie’s blackened heart provide some surprisingly moving moments. It wouldn’t be Bad Santa without Cox’s double-crossing sidekick Marcus, and the two like each other even less than in the first film. It is generally funny, but again, the back-and-forth bickering can get tiresome.

The big coup here is Bates. Many comedy sequels have used relatives played by big names to continue the story, with mixed results, but Bates is just what Bad Santa 2 needs. In meeting Willie’s mother, we see just why he’s so screwed up. Sunny’s term of endearment for her son is ‘s***stick’, and Bates works her way through the script’s myriad profanities with aplomb. She fully understands the cynical spirit of Bad Santa and is a hoot to watch. It’s fun to see Sunny pretending to be a kindly old lady, dressing as Mrs. Claus for the charity, and then swiftly reverting to her mouth-like-a-truck-driver self.

Unfortunately, Lauren Graham couldn’t return because she was busy with filming the Gilmore Girls revival for Netflix. Our leading lady here is Hendricks, whose patented mix of sweet and sexy is a fine complement to Thornton’s gruff curmudgeon tendencies. Of course, even given Willie’s multiple shortcomings, he’s just catnip to the ladies and Diane falls for him. It’s fun to see Kelly return as Thurman all these years later. While there are a great number of jokes at the expense of Thurman’s apparent mental difficulties, his naivete and sweetness and the effect he has on Willie give the film a semblance of a soul.

A belated sequel to a popular comedy is a tricky proposition: in recent times, we’ve seen Anchorman 2 succeed, but Dumber and Dumber Too and Zoolander 2 fumble the landing. Bad Santa 2 takes another bite out of that acid-soaked candy cane, but there’s just enough character development from the first film. It’s fun to see Willie, Marcus and Thurman return, with Bates’ brassy presence mixing things up.

Summary: As crude, mean and unapologetically funny as the first go-round, Bad Santa 2 avoids being merely more of the same thanks to Kathy Bates’ supporting turn.