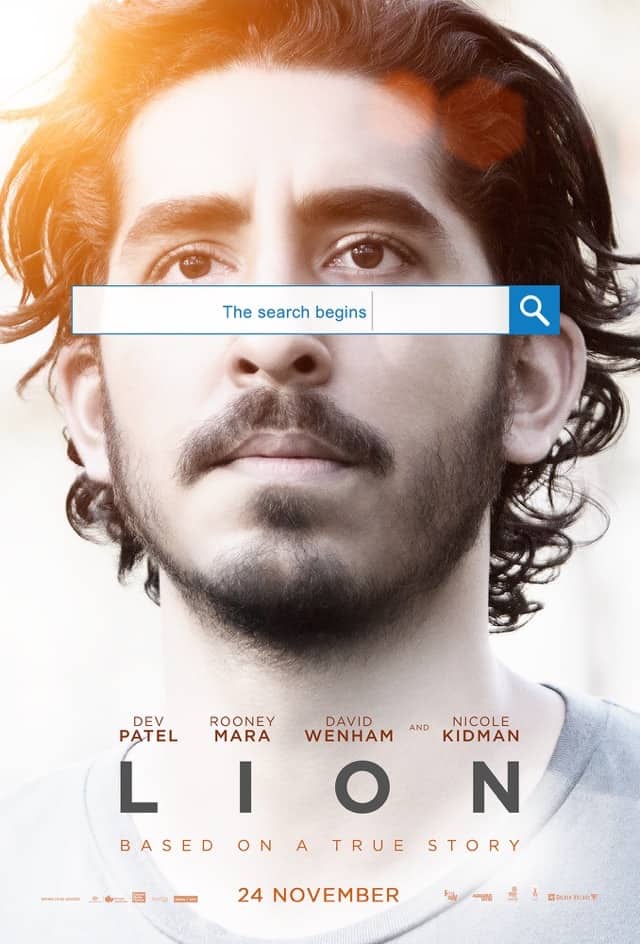 “Your heart will lead you home” – so sang Kenny Loggins in The Tigger Movie. Lion tells the true story of one man’s quest to find home, a quarter century after getting lost. It is 1986, and five-year-old Saroo (Pawar) accompanies his older brother Guddu (Bharate) to search for change on a train car. When Saroo falls asleep in the train and it leaves the station, he is separated from Guddu, his sister Shekilah and his labourer mother Kamla (Bose). The train takes Saroo 1200 km away from his home of Khandwa to Calcutta. Saroo doesn’t know his own surname or his mother’s name and can’t speak Bengali, the main language used in Calcutta. He eventually lands in a government centre for abandoned children. Saroo is adopted by John (Wenham) and Sue (Kidman) a couple from Tasmania, Australia.

In 2007, the now-adult Saroo (Patel) leaves to study hospitality in Melbourne. There, he falls in love with his classmate Lucy (Mara). Over dinner with some of his classmates who were originally from India, Saroo tells them his story. He picks up on a suggestion to use Google Earth as a way of determining where his hometown is, so that he may search for his family. He is afraid of hurting his adoptive parents, who are struggling with their wayward adoptive son Mantosh (Ladwa), and keeps his quest a secret. Over the years, the pieces fall into place, and Saroo inches closer to a reunion with his long-lost family.

Lion is based on Saroo Brierley’s autobiography A Long Way Home, which was optioned as a film a month before it was published in 2013. Poet, novelist and screenwriter Luke Davies adapted the film for the screen. Director Garth Davis makes his feature film debut with Lion, which must have been a daunting undertaking. Location filming in India and Australia gives the story scope, both of Saroo’s home countries juxtaposed with each other.

Lion is a harrowing, compelling tale, one that will resonate especially with adoptive families. The film’s Dickensian first act, with Saroo getting lost and overcoming various frightening obstacles in an unfamiliar big city, is immersive and authentic in its grimness. Through restrained stylistic flourishes, Davis conveys how Saroo is haunted by memories of his childhood and is driven by a desire for closure, the possibility that he might never see his birth mother again gnawing at him. While Lion’s first half is riveting, its second half lacks dramatic urgency. As incredible a story as this may be, Saroo’s outbursts of angst as he tries to trace his hometown grow repetitive, as does his browsing of Google Earth.

The performances in Lion are uniformly excellent. Each actor seems intent on doing Saroo’s story justice, Patel leading the charge with a heartfelt, subdued turn. There’s a profound sadness in his eyes that sells the trauma burrowing to the surface. Patel’s Australian accent is solid too.

Equally deserving of praise is Pawar, who won the role over 4000 other boys. It seems that more is required of the young actor than of Patel, since a good chunk of the film focuses on five-year-old Saroo. The brotherly bond between Saroo and Guddu is endearing, making the inevitable separation all the more painful. It’s an emotionally and physically demanding role that he pulls off with considerable panache. Pawar was unable to attend the film’s U.S. premiere because he was denied a visa. Boo.

This ranks among Nicole Kidman’s finest work in recent years. Sue is warm and compassionate, but fears that she might not be able to keep her family together. Sue and John embody the most admirable traits of adoptive parents, and it is heart-rending to see them deal with their sons’ respective struggles. Kidman was the real-life Sue’s top choice to play her. Lion reunites Kidman and Wenham, who played enemies in Australia and play a loving couple here. While Wenham has less to do than Kidman, he helps make the onscreen Brierleys a believable family unit.

Even though Mara gets second billing, her role is not as large as that suggests. Still, the character of Lucy, based on Saroo’s real-life girlfriend Lisa Williams, is kind and supportive while having more dimensions beyond that. Saroo and Lucy fall in love in what seems like an instant; their romance receiving limited development because that’s not where the story’s emotional weight lies.

Lion has been less charitably described as “Oscar bait”, but it is bereft of the pomposity and self-importance some films of this type possess. Despite certain structural inconsistencies, Lion held this reviewer’s attention and laudably steers clear of being melodramatic and exploitative.