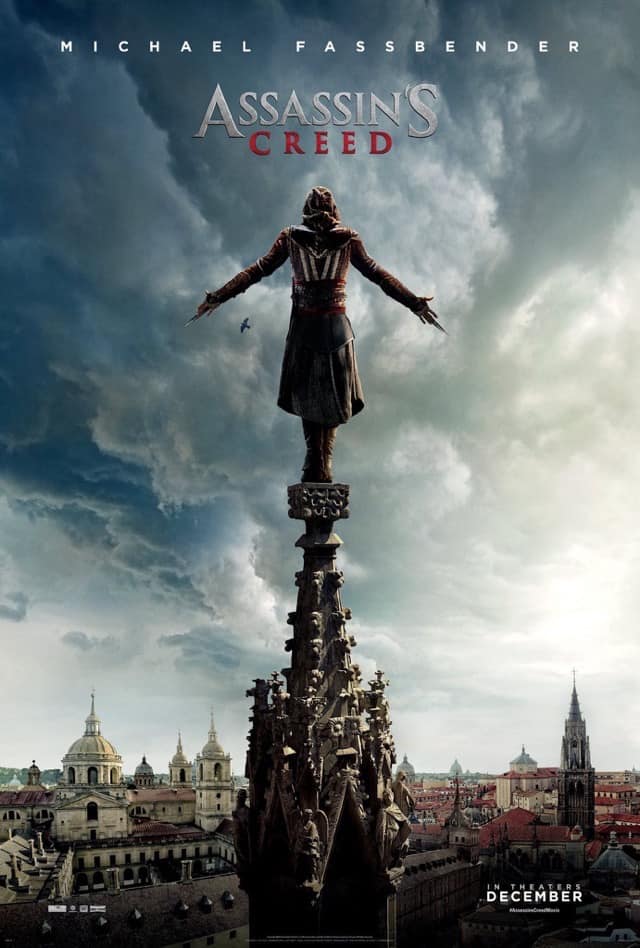 Nobody expects the Spanish Inquisition – least of all Callum Lynch (Fassbender), a death row inmate who is spirited away to the late 15th Century. It’s not time travel per se, but regression via ‘genetic memories’. Callum is the descendant of Aguilar de Nerha, a warrior who belonged to the secret society known as the Assassins. The Assassins have long been at war with the Templars. Alan Rikkin (Irons), the CEO of Abstergo Industries, is a Templar. Callum lives out the experiences of Aguilar using a machine called the Animus, developed by Alan and his daughter Sophia (Cotillard). Alan endeavours to discover the whereabouts of an artefact known as the Apple of Eden, which is said to contain the origins of free will. Callum must come to grips with his destiny as he finds himself caught in the conflict between the Assassins and the Templars, a conflict that is about to reach its tipping point.

It’s no secret that films based on video games have long had a bad rap, and many had hoped that Assassin’s Creed would mark a watershed moment, proving that good movies based on video games could actually exist. After all, promising director Justin Kurzel was picked to direct, with Michael Fassbender starring and co-producing. Alas, a video game movie that can be universally considered ‘good’ remains elusive. Assassin’s Creed has the task of appealing to fans of the game franchise, while remaining easy enough for neophytes to get into. The decision to create an original story that would not be a direct adaptation of any of the games in the series seemed like a wise one. While this should have freed Kurzel and the film’s creative team from the burden of condensing a sprawling plot into one film, the end result is infuriatingly muddled.

The suspension of one’s disbelief is key to buying into the premise of Assassin’s Creed. A sinister corporation seeking out the descendants of a sect of assassins and tapping into their genetic memories for their own ends sounds silly on paper, but could be worked into something compelling. The screenplay is credited to Michael Lesslie, who adapted Shakespeare’s Macbeth for Kurzel; and the team of Adam Cooper and Bill Collage, who wrote The Transporter: Refueled and Exodus: Gods and Kings. Assassin’s Creed is an inchoate work, a mish-mash of history, sci-fi and philosophy that refuses to gel into a workable whole.

The Apple of Eden is as ludicrous a MacGuffin as they come. In the games, the mystical orbs are the creations of the godlike Isu, and have granted incredible power to figures from Moses to George Washington. In the film, the Apple contains, uh the cure to violence? Or something. It’s one of many ways in which Assassin’s Creed is stubbornly hokey.

The scenes set during the Spanish Inquisition are the best bits of the film. Cinematographer Adam Arkapaw treats us to sweeping establishing shots, the environments are rich with period detail and the action choreography is slick. It is difficult to get into the ‘flashbacks’ because we’re constantly jerked back to the present day and reminded that it’s all a simulation (even though ‘simulation’ is not an entirely accurate description). The big parkour chase set piece is executed well, making us wish there was more of that and less wading through an exposition swamp. The Spanish Inquisition has been codified as an example of oppression through religion. As expected, it’s not depicted with much nuance; the Catholics portrayed here as moustache-twirling villains. The violence is as brutal as a PG-13 rating will allow, and it’s clear that a movie about assassins shouldn’t have to pull this many punches.

Fassbender has leading man charisma to spare and is a believable action hero, which is why it’s so frustrating that Callum Lynch is kind of a nothing protagonist. He has a tragic past, has been dealt a bad hand in life and becomes a pawn in a far-reaching conspiracy. Those are fine ingredients for a hero, but something’s missing here. Perhaps it’s in how the film gets bogged down in the mechanics of the plot, instead of letting the characters carry the story forward.

Cotillard delivers her poorly-written dialogue with admirable conviction, while Irons stands around and looks solemn. Aguilar’s fellow Assassin Maria (Labed) could’ve been the character to steal the show, but she’s just required to look cool. It’s difficult to get invested in the relationship between Aguilar and Maria, or in the relationships between any of the characters, for that matter. Moussa (Williams) a descendant of the Haitian Assassin Baptiste, emerges as the character with the most personality.

Kurzel’s brother Jed composed the film’s score, as he’s done for most of the director’s films. It’s tinged with world music flair, and like the rest of the atmospherics, is fine. While there’s something of a silver lining to be found in a filmmaker treating a video game-based film as seriously as Kurzel has here, Assassin’s Creed is po-faced to a detrimental extent. Dull and convoluted rather than spirited and entertaining, this is a let-down for anyone who was hoping it would herald the success for video game movies that comic book movies have been enjoying lately.

SUMMARY: Assassins are deft and swift; this movie is clumsy and plodding. The sequences set in the thick of the Spanish Inquisition are the closest Assassin’s Creed gets to actually being entertaining.