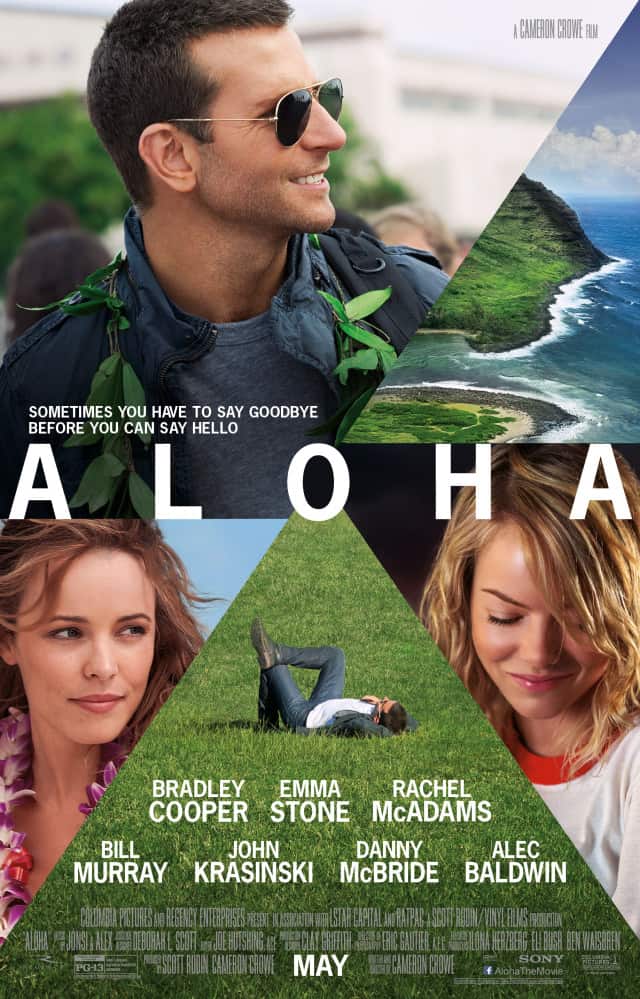 Typically, movies with an acclaimed director and top-notch cast arrive in cinemas trailing Oscar buzz. Not so Aloha, however, which drags in its wake a raft of controversies. Chiefly, Cameron Crowe has been lambasted for his unfortunate decision to cast whiter-than-white Emma Stone as high-flying air-force cadet Allison Ng, who’s a quarter Hawaiian and a quarter Chinese. That’s off-putting enough, to be sure, especially since no one in the film – including Ng herself – seems to be able to pronounce her surname. But the even bigger problem with Aloha is that it’s, quite simply, a mess of a film: an amiable mess, in parts, but a mess nonetheless. 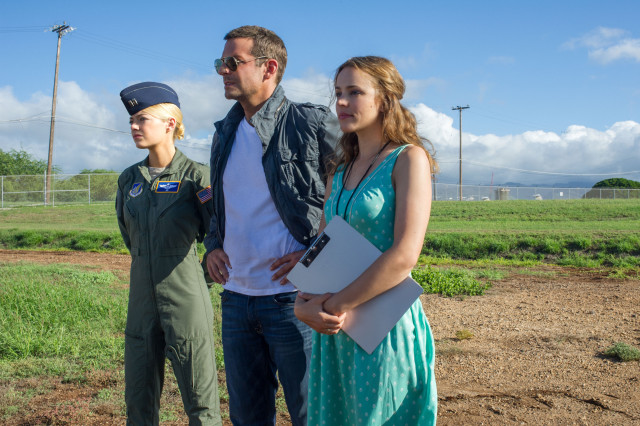 Once a boy who dreamt of exploring the stars, former military man Brian Gilcrest (Cooper) sold his soul many moons ago to money-grubbing corporations with designs on outer space. After a serious screw-up in Kabul, he’s been handed a second chance in Hawaii by billionaire Carson Welch (Murray) – he’s tasked with getting the king of the Hawaiian nation, an old buddy, to perform a blessing for Welch’s latest, privately-funded project. But Brian finds himself reluctantly mixing business with pleasure: as he bickers and banters with his perky, idealistic air-force liaison Allison Ng (Stone), he’s plunged back into memories of his troubled past when he runs into Tracy (McAdams), an ex-girlfriend who’s started a new life with her husband Woody (Krasinki). 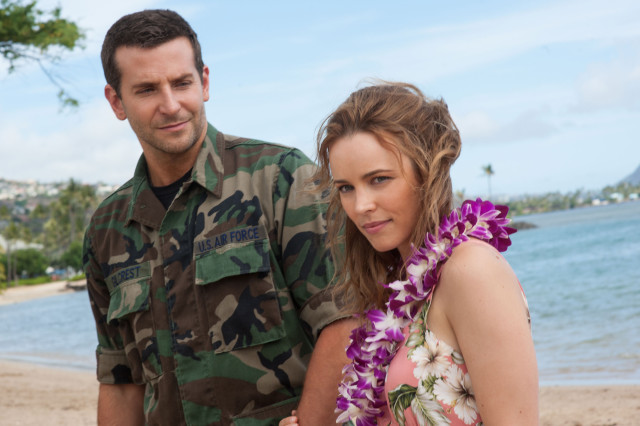 To say Aloha is awkwardly written is an understatement. Crowe reportedly worked on the script for four years, as stars like Ben Stiller and Reese Witherspoon came and went. But very little of that effort is evident onscreen. The film never quite decides what it wants to be. It swings from a drama about one man’s spiritual rehabilitation to a bizarre rom-com love rectangle, spiced with a gently political (and yes, blithely racist and white-centric) meditation on the land, the sky and Hawaii’s place in America. None of it strictly makes sense or connects with anything else, before culminating in a surreal sequence lifted out of a B-grade apocalyptic thriller. (Where do Brian’s hacker skills come from?!) Small wonder that former Sony co-chairman Amy Pascal lamented in one of her leaked e-mails: “I’m never starting a movie again when the script is ridiculous.” 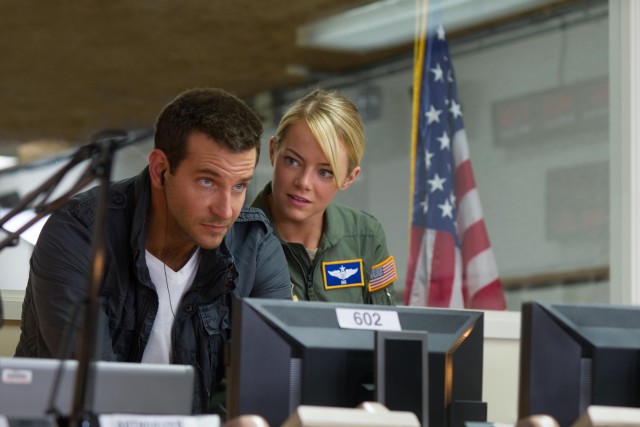 Even the characterisation – typically Crowe’s strong suit – wavers and wobbles all over the place. It’s hard to tell whether and when we’re supposed to sympathise with Brian, because his motivations for pretty much everything he does never become clear. The other characters in his orbit are paper-thin, buoyed more by the charisma of the actors playing them than the words they’re asked to speak. Tracy’s reaction to Brian’s reappearance in her life is particularly puzzling: is she flirting with him? Does she love Woody at all? Is she trying to hint at Brian about their past, or give him advice on his future? As with most things in this film, it’s a confusing mix of everything Crowe has dumped into the script, shorn of focus and, oftentimes, logic. 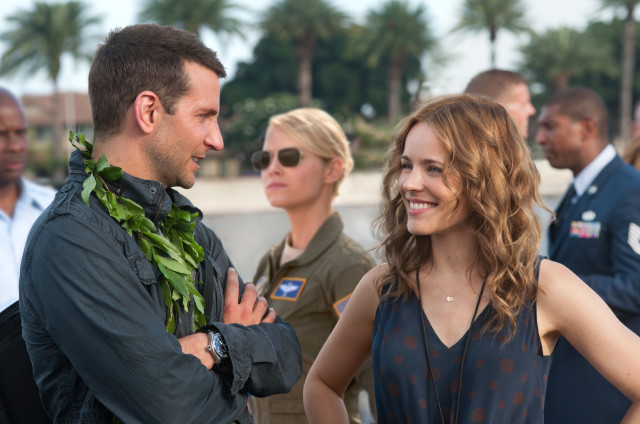 Admittedly, there are a few patches of charm that shine through the whole mess. Crowe’s cast is devastatingly white, yes, but – for what it’s worth – they are all very good, very watchable actors. It’s fun to watch Murray and Stone, buddies from their Zombieland days, perform a super-weird pas de deux on the dance floor, and Alec Baldwin is very funny as a perennially shouty general. Krasinski pulls off some great comedy – and a little tragedy – as the taciturn Woody, particularly in a final face-off with Cooper that’s easily one of the highlights of the film. Bits of Crowe’s dialogue sing, as does his trademark bouncy, eclectic soundtrack. 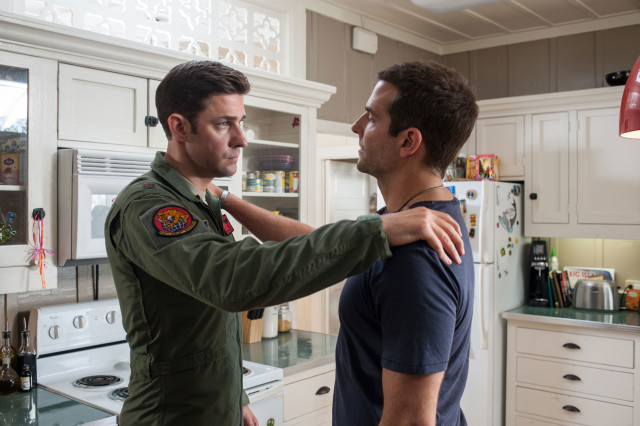 It’s far from enough to salvage the entire film, however. Fans of Almost Famous and Jerry Maguire would know that Crowe has an ear for dialogue and a knack for romance and kooky optimism. But these, as Aloha definitively proves, do not a good movie necessarily make. There are a few interesting ideas simmering beneath the surface of Crowe’s sun-kissed film, but they never really break through. Most of the time, the film drifts along on its own strange internal rhythms, depending too much on its put-upon cast to unearth logic and sense where, perhaps, there isn’t any to be found. 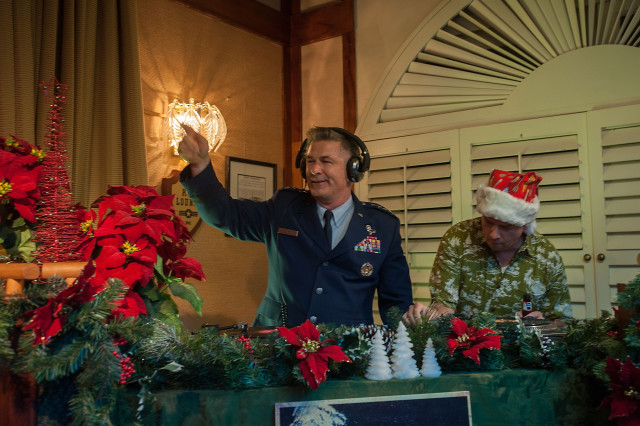 Summary: The white stuff – and also the wrong stuff.