Five years after the release of Red Cliff – Part 2, director John Woo returns with the two-part romantic epic The Crossing. The film, which focuses on three central romances that converge aboard the ill-fated steamer Taiping during the Chinese Civil War in 1949, has been chosen as a special presentation for the opening night of the 25th Singapore International Film Festival (SGIFF).

Woo, along with stars Zhang Ziyi, Tong Dawei and his daughter Angeles, are in Singapore to kick off the SGIFF festivities. F*** was at the press conference held at the ArtScience Museum in Marina Bay Sands Singapore, as well as the red carpet at Shaw Lido later that evening.

Woo, known for his “heroic bloodshed” Hong Kong action films such as A Better Tomorrow and Hard Boiled and his Hollywood efforts including Face/Off and Mission: Impossible 2, isn’t necessarily a director one would associate with the romance genre. “I believe in love, I believe that love can bring strength and warmth,” he enthuses. “Seeing as this is a romance that takes place in tumultuous times, it is very moving. Making the film was a challenge because of the upheaval that took place during this period in history, making it a very painful chapter in time.” He goes on to explain that the two-parter looks at how the three central romances go through a trial by fire in the face of war and disaster. 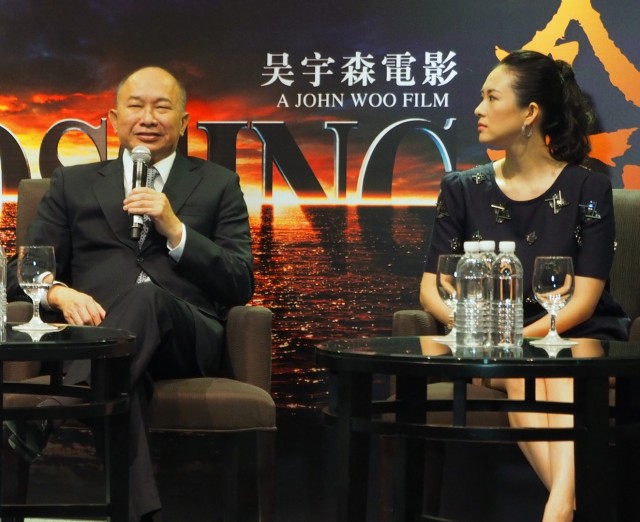 Star Zhang Ziyi says that while making the film was far from a walk in the park, it was worth it for the chance to work with the famed director. “Everyone endured the hardships of making this film for the opportunity to work with John Woo. I was very moved after reading the script because the characters within are all drawn very vividly. Everyone hopes to be able to work with John Woo. He is a good person, he cares for us all very much.”

It is Tong Dawei’s first time in Singapore and he wonders aloud what sweet treats he should take back home for his kid. Zhang suggests he get some pandan cake from the airport. Tong last worked with director Woo on Red Cliff. Regarding The Crossing, Tong says “I feel that this is the most challenging film I’ve worked on to date. We were filming for nearly a whole year and be it for the actors or filmmakers, there were many firsts that we encountered. It was physically demanding and there were a lot of special effects involved.” The major set piece in Part 2 of the film is the dramatic sinking of the Taiping and shooting that required the actors to spend hours shooting in a water tank. 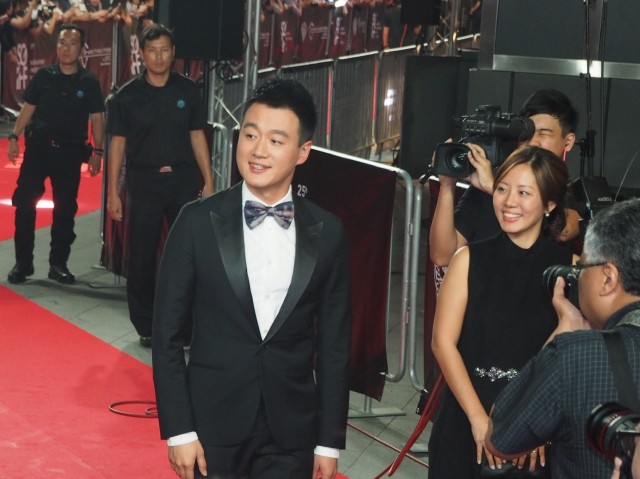 On the subject of working with Zhang Ziyi, Tong reveals “Ziyi and I have been good friends for a while but this is the first time we are working on a film together. On the first day, it was a little awkward because under normal circumstances, we don’t really discuss work. All of a sudden, we were working together and it was a little weird. Furthermore, we had to film a pretty heavy scene on the first day, the farewell scene.”

However, Woo confirms that the actors were able to get into the swing of things quickly, saying he was moved by their performances. “They are both very skilled actors and brought real emotion to the roles, there was genuine feeling to it. While I was watching them, I started tearing up.” 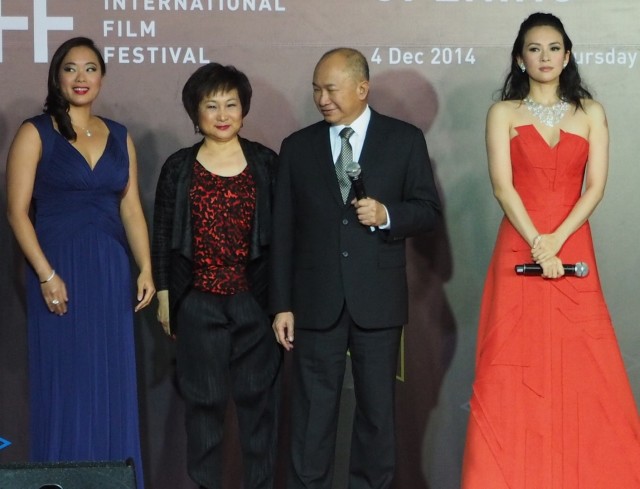 The Crossing is something of a family affair for Woo. His wife Annie Woo Ngau Chun-lung has a cameo in the film and his daughter Angeles Woo, also present at the press conference, has a supporting part as the sister-in-law of Takeshi Kaneshiro’s character. “It’s my first time working with my dad on a feature film. It’s my first time in Singapore too so I’m very excited,” Angeles says. “It’s something I never thought would happen and I’m very fortunate to be able to experience it in this film and it’s something that I’ve learned a lot from as an actress.” She adds that having grown up mostly in Los Angeles, it was challenging to play a character from a very different place and time. The role required her to brush up on her Mandarin and also learn Min Nan, the Taiwanese dialect. Host Danny Yeo jests that a scene in which Angeles tucks Takeshi Kaneshiro into bed must make her the envy of many of the heartthrob’s fans.

Zhang Ziyi states that she is not a believer in over-preparing for a role. “Acting is an emotional process and a lot of these emotions manifest themselves on the day as you play opposite the other actors. It’s also influenced by the environment; the costumes and the sets. If you’re in a special environment, it will draw out emotions that you cannot prepare for. A lot of it is in the moment…if you spend too much time worrying about every last technical detail of your performance, it becomes rote. I don’t think that’s what performing is about.”

Touching on the myriad struggles that her character in The Crossing must endure, Zhang says “both Dawei and I portray characters of the lowest social strata. They’re like wild grass, even though they grow in a rough environment, they are very resilient. After the war, she goes to Shanghai and has to become a prostitute. To a person this low on the social ladder, the challenges in her life are great. She has a resilience, an ability to persevere. This resilience is something that all successful people, be they men or women, have to possess.” 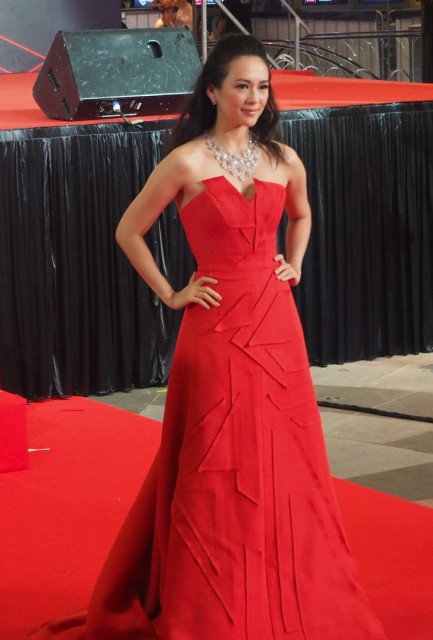 A reporter bravely broaches a personal question, asking Zhang about starting a family with her boyfriend, rocker Wang Feng.” It’s actually not me pushing him to get married, it’s the media,” she says with a chuckle. “I have never given him any actual pressure. I feel that marriage has to happen naturally. There’s no way to rush it, we never know what tomorrow may bring. In the meantime, we have to care for each other.” Zhang gets her own back at the reporter, who asked the question in English, with a dash of condescension. “Do you understand? You won’t misquote me, right?”

The film was post-converted into 3D and is being released in IMAX 3D. Woo explains his personal attitudes towards the stereoscopic format, saying “there are battle scenes and a disaster at sea, there were large-scale sequences that justify the use of 3D effects so the decision was made to convert it. It was more challenging while I was making the film because I had to pay special attention to angles and focus. That was a challenge because I still look at films as a 2D medium.” He admits that 3D doesn’t really excite him because of the limitations in making a film in that format. “I still think it’s better to make movies in 2D because I look at making movies as like painting, composing a frame. I feel that sometimes, 3D movies feel fake. There’s a sense of artifice, a house can look like a doll’s house and cars and buildings look like toys. However, there are advantages to the format but I still prefer traditional 2D movies. “ 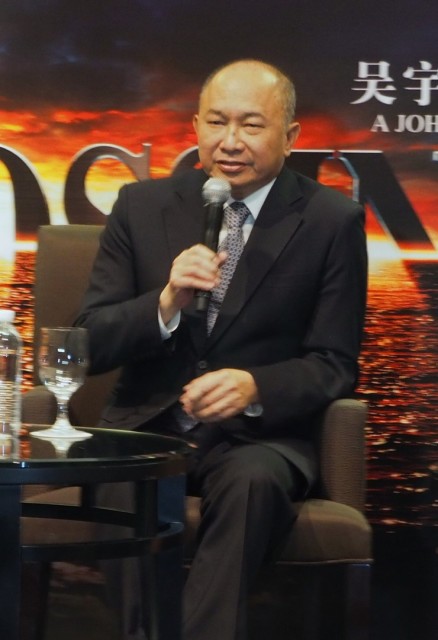 The director famous for stylishly violent action movies reveals his softer side when discussing the romantic elements of the film. “Normally, I’m more of a shy person. I have to find ways to express my romantic side. Sometimes, on my way back, I’ll pick a flower from the yard to give as a present to my wife.” Woo and his wife have been married for 38 years. In the film, there is a waltz sequence shared by Huang Xiaoming and Song Hye-kyo. Woo shares that when he was younger, he enjoyed dancing with his wife, dedicating the scene to her. He also believes in leaving his work on the movie set, saying “the general in the film doesn’t bring the war home and spares his wife from the ugly side of war. Similarly, I don’t bring my work home, I just want to support and care for my wife. That’s how I express ‘romance’.”

Angeles corroborates this, saying “At home he’s very caring and he doesn’t bring the work home and he likes to make dinner for everyone, that’s just another way of showing his affection. In this film, he used some memories past to really illustrate the love story happening and that’s a very nice touch. “ 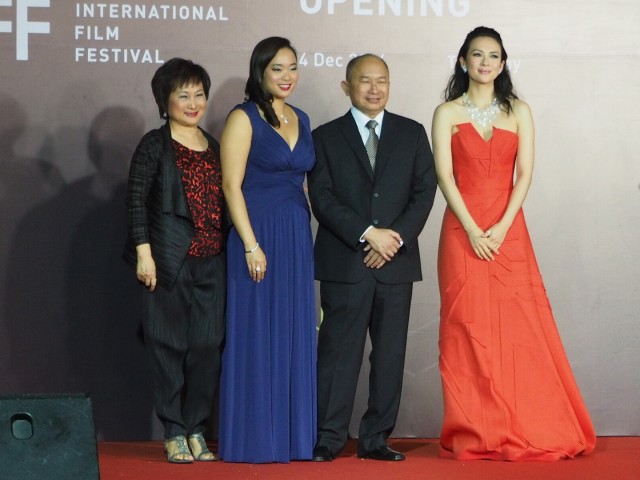 “Even though there are tragic elements to the romances in this film, I don’t want it to be a depressing experience for the audience and I hope for audiences to ultimately find it hopeful and uplifting,” the director concludes.