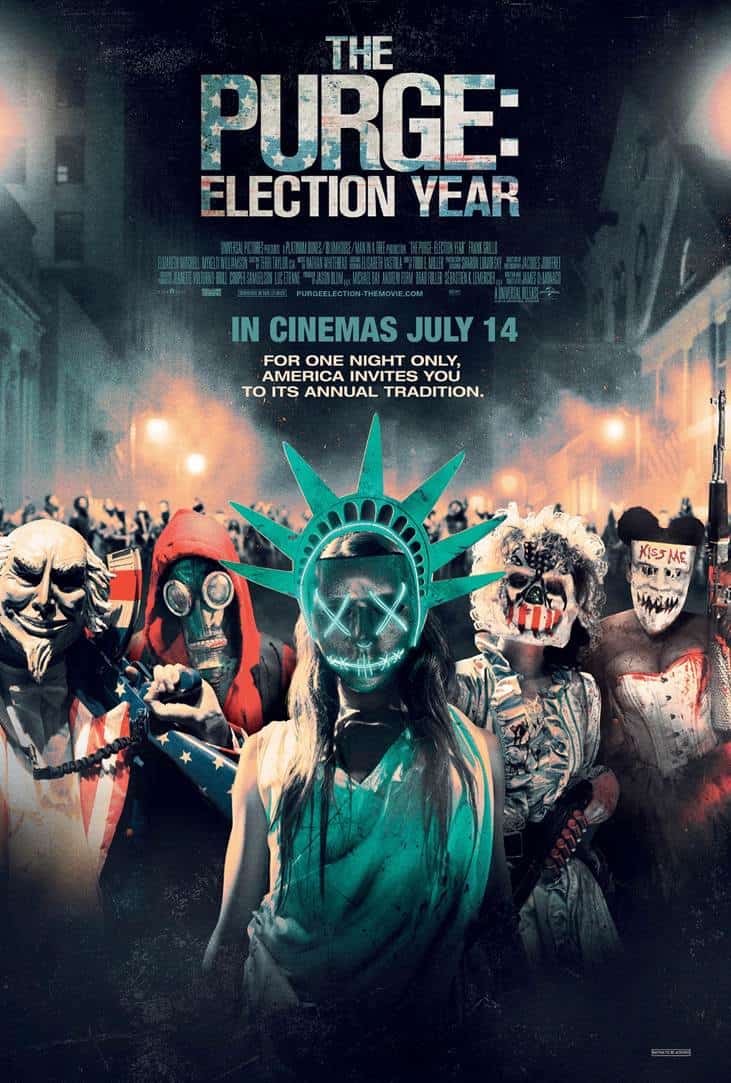 There’s a death toll at the polls in the third instalment of the Purge series. It’s two years after Sergeant Leo Barnes (Grillo), the protagonist of the second film, forsook vengeance for forgiveness. He is now the head of security for senator Charlene “Charlie” Roan (Mitchell), a front-running candidate for the U.S. Presidency. Roan is running on an anti-Purge platform, vowing to do away with the annual 12-hour period in which all crime in America is legal. The sinister Minister Edwidge Owens (Secor), running against Roan, is a member of the New Founding Fathers of America (NFFA) party who instated the Purge. On the night of the Purge, Roan and Barnes are forced to go on the run as Roan is targeted by the NFFA. They meet up with convenience store proprietor Joe Dixon (Williamson), his employee Marcos (Sora) and paramedic Laney Rucker (Gabriel), supporters of Roan’s trying to make it through the night as all hell breaks loose on the city streets.

The Purge franchise is built upon quite the preposterous premise, that one night of unchecked wanton mayhem per annum is sustainable basis for a stable society. Sure, speculative fiction is filled with outlandish “what ifs?”, because that’s what the genre is for – but the fact that these films are set in the very near future warrants quite the buy from audiences. The Purge: Election Year is packed with the grim violence genre aficionados would lap up, but writer-director James DeMonaco also aspires to be topical and make a political statement of some kind. 2016 is, after all, an election year in the U.S., with the ongoing presidential race by turns farcical, riveting and quite depressing.

Far be it from anyone to demand subtlety from a production line action-horror flick like this, but the political analogies are painfully clumsy and on-the-nose. The NFFA is depicted as a hard-line religious right sect who ritualise the annual Purge. While the opportunity to make observations on extremism and fanaticism presents itself, the film’s villains are laughably over-the-top. The Purge: Election Year is the latest example of ‘have your cake and eat it too’ satire, condemning indiscriminate violence while also shovelling it into audiences’ mouths. A leftist exploitation film brimming with blood-soaked violence seems like a contradiction in terms, and DeMonaco’s writing and direction isn’t nearly smart enough to thread that needle, instead coming off as hypocritical.

The Purge: Election Year does succeed in providing likeable heroes to root for. Grillo’s performance in The Purge: Anarchy made many wonder why he hadn’t become an A-list action star earlier in his career and his presence is more than welcome. As great as Jon Bernthal is in the Daredevil series, this reviewer believes Grillo would’ve been the perfect actor to play the Punisher – alas, he was cast as Crossbones in the Marvel Cinematic Universe instead. We’ll have to settle for the character of Sergeant Leo Barnes, who is satisfyingly close to the Marvel vigilante. Here, standing guard over a presidential candidate, there are shades of Snake Plissken of the Escape from New York and Escape from L.A. films, which Monaco is clearly trying to emulate.

Mitchell’s Roan possesses a blend of idealism, fiery passion and a dash of naiveté, such that she is fairly believable as a presidential candidate who would pose a threat to the status quo. Williamson embodies the scrappy everyman with the easy warmth and charm he brought to Bubba in Forrest Gump all those years ago, though a good deal of the character’s racially-charged dialogue is cringe-worthy rather than snappy. Marcos is a Mexican immigrant, and yes, it’s the minorities vs. the rich, murderous white guys, and that sketch of a character is all we get. Laney is made out to be a badass good Samaritan, but doesn’t get quite enough screen time to strut her stuff. The NFFA’s hired muscle is led by Earl Danzinger (Serpico), a skinhead sporting scalp tattoos, with Confederate flag and Nazi swastika patches sewn onto his uniform. It was very difficult to tell he was supposed to be the bad guy.

Like many of the franchises from production company Blumhouse, the Purge movies are relatively inexpensive to make and yield high profit margins. Unfortunately, it’s evident that many corners have been cut, and the far-reaching chaos that one would expect given the scenario is scaled back a far bit. Setting the film against the backdrop of a presidential election is far from a bad idea, and certain visuals including the letters “P-U-R-G-E” painted in blood on the pillars of the Lincoln memorial are surprisingly potent. However, DeMonaco favours carnage over any semblance of wit at every turn, any timely commentary buried beneath a flurry of bullets and arterial spray.

Summary: The Purge: Election Year takes stabs at political satire and showcases Frank Grillo in fine action hero form yet again, but it’s too cheap and mind-numbing to be anything more than a middling action-horror exercise.