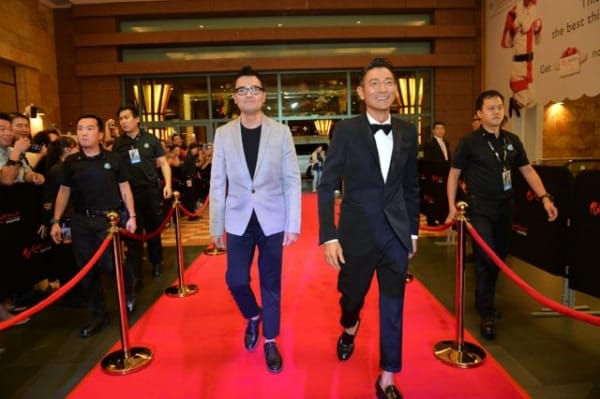 In Firestorm, Andy Lau plays Hong Kong Police Senior Inspector Lui Ming Chit. â€œIt`s a very straightforward part, he explained. â€œHe lives by an established set of rules, but over the course of the film, he has to break these rules. Gordon Lam plays To Sing Pong, former schoolmate and Judo rival to Lui Ming Chit, who falls in with the wrong crowd but is desperate to prove to his girlfriend, played in the film by Yao Chen, that he has turned over a new leaf. In order to do so, he becomes an informant to Senior Inspector Lui.

Throughout the press conference, Lam`s bromance with Lau was evident, Lau constantly ribbing his co-star and â€œemployee. â€œSince he joined my production company, he`s been begging me every year to give him a romantic part. When we auditioned the actresses, none of them agreed to act opposite Gordon, Lau joked. In addition to the schoolboy-ish teasing, Lau also had genuine praise for Lam. â€œHonestly speaking, I think he`s grown a lot as an actor, he said. â€œIt`s his first proper action film and I think he was very successful in taking on that aspect and putting his spin on this material. When asked if he was looking out for his own by casting Lam in the film, Andy replied â€œIf I don`t look out for my own, who am I gonna look out for?

Lam certainly seemed grateful for the opportunity to take on what is probably his biggest role to date. â€œWhen I entered the industry, I was very green and didn`t understand how anything worked. Everything I know, I learned from him, Lam said of Lau. It can be said that the To Sing Pong character, with his personal history, conflict and relationships, is even more complex and more interesting than Lui Ming Chit. â€œHe`s a character who does everything for the love of a woman, Lam says. Lam also expressed that up until this point, he didn`t feel confident enough to take on a leading role even though he had been offered such parts, and that it was Lau`s guidance that got him through the making of Firestorm.

Lau hopes that the wham-bam action spectacle on display in Firestorm will draw crowds. â€œIt`s a very action-packed film, and I hope that it will be able to compete closer to the level of Hollywood films in terms of its production value, he told journalists. Lau touched on the budget and time constraints faced by the production. â€œIf a sequence takes three months to shoot on a Hollywood production, we have to get it done in one, he said. â€œI hope audiences appreciate the diligence we took in putting these sequences together.

Senior Inspector Lui Ming Chit`s relationship with To Sing Pong is a very rocky one, and the film`s central hand-to-hand combat sequence pits them against each other. When asked if he found filming the sequence exhilarating, Lam replied â€œOf course I did. I`ve been waiting more than ten years to hit Andy Lau! He describes the intense training he underwent to take on the physically-demanding role, and Lau even admitted that the shoot was harder on Lam than it was on him.

Firestorm has been post-converted into 3D. When asked about this method of presentation, Lau said that director Alan Yuen is very skilled in the area of computer-generated effects and that he has been wanting to shoot in 3D for some time. â€œI don`t have expertise in this area, and at first I was opposed to the idea of Firestorm as a 3D movie, he reveals. â€œHe (Yuen) convinced me to shoot one scene as a test, and that was the fight sequence down the stairwell. After using that to demonstrate the 3D presentation, I thought it actually didn`t look too bad. Is 3D a necessity for Firestorm? I don`t think so. This has been a learning experience for me in the area of 3D filmmaking technique. This is the first 3D cop film to come out of Hong Kong and we`re very much testing the waters.

Lau also voiced his support for the Singapore film industry, inviting would-be directors to pitch projects to him and even approach him to star in local films. â€œOddly enough, nobody from Singapore has contacted me about investing in a film here, he said. â€œI saw Ilo Ilo on the plane and I thought that the content and the cinematography, all of it was very solid. I really would like to throw my support behind new directors and I`m being serious here, if anyone has a proposal, you can send it to my office. I may be expensive, but I`m worth it.