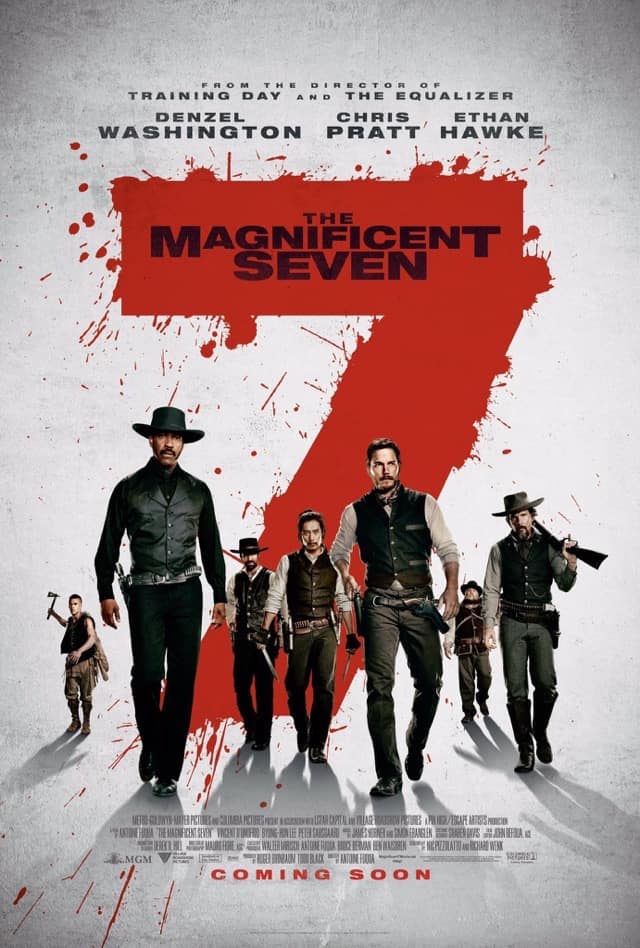 Director Antoine Fuqua is heeding the Village People’s sage advice: “go west”. In this western, the townspeople of Rose Creek are threatened by the avaricious land robber baron Bartholomew Bogue (Sarsgaard), who plans on intimidating them into giving up their settlement. Emma Cullen (Bennett), whose husband Matthew (Bomer) was killed by Bogue, desperately engages the services of bounty hunter Sam Chisolm (Washington) to take on Bogue. Chisolm assembles a team of men to take on Bogue and his army. They include gambler Joshua Faraday (Pratt), sharpshooter Goodnight Robicheaux (Hawke), tracker Jack Horne (D’Onofrio), knife-throwing assassin Billy Rocks (Lee), Mexican outlaw Vasquez (Garcia-Rulfo) and Comanche warrior Red Harvest (Sensmeier). Chisolm and his team have to get the Rose Creek residents into fighting shape so they can defend their home from Bogue’s forces.

A remake of 1960’s John Sturges-directed The Magnificent Seven has been in the works for a while, with Tom Cruise, Matt Damon, Morgan Freeman and Kevin Costner attached at one point. The Magnificent Seven is itself a remake of Akira Kurosawa’s 1954 classic Seven Samurai. Working from a screenplay by True Detective creator Nick Pizzolatto and The Equalizer scribe Richard Wenk, Fuqua strives to create a film that’s true to the spirit of its revered forebears, while also having enough vim and verve to attract todays audiences. The ethnically-diverse cast might seem like a politically correct update, but Fuqua maintains that the reality of the old west was “more modern than the movies have been”, with black cowboys, Asian railroad workers and Native Americans all around. With ethnic minorities still not getting the representation in Hollywood productions that they desire, this is a nice step forward.

While it is significantly faster in pace than the 1960 film, there are times when this Magnificent Seven drags its hoofs. At 133 minutes, it’s longer than it strictly needs to be. There is the feeling that the film never quite hits its stride, even by the time the protracted climactic battle takes place. That said, it’s still sufficiently entertaining, thanks to the dynamics of the appropriately stellar cast. Mauro Fiore’s cinematography has an old-fashioned sweep to it, the Rose Creek set is reasonably authentic and the action scenes are thankfully light on the shaky-cam. The fight choreography can get pretty elaborate, with lots of trick shots and fancy knife-flinging on show.

For a film that celebrates old-school machismo, there isn’t too much obnoxious posturing to be found. Washington’s subdued authority makes him the ideal team leader, and he does have a similar quality to Yul Brynner in the 1960 version. He cuts a striking figure astride a horse, and projects manliness without resorting to chest-thumping bravado.

One can tell that Pratt is having the greatest time here, stepping into the Steve McQueen role. He turns the roguish charm up to 11 and is absolutely irresistible as the wily card sharp, in no small part because he’s enjoying himself that much. There are snarky quips aplenty, and Pratt makes them work without coming off as annoyingly glib. Hawke’s Goodnight probably has the most depth out of all the characters. He’s the tormented veteran stricken with PTSD, and Hawke ably conveys that Goodnight is attempting to conceal his trauma beneath a cool veneer. There is some emotional resonance to the buddy pairing of Goodnight and Billy, who are established as being inseparable. While Lee, being the cool cat he is, fits right in with the others, the character still feels like the designated Asian martial arts guy on the team.

Both Garcia-Rulfo and Sensmeier don’t have a lot to do, but if this were a boyband, Sensmeier definitely would be ‘the cute one’. D’Onofrio is delightful as Horne, who’s pretty much Chewbacca if he were a human being. He may be able to kill with his bare hands, but he’s still reasonably endearing. Bennett’s character is given a satisfying amount of agency, and is neither extreme of wailing damsel in distress or gun-slinging, rooting-tooting Annie Oakley type. The biggest difference between this and the 1960 Magnificent Seven is the primary antagonist. While the predecessor had a Mexican bandit played by Eli Wallach, Sarsgaard’s Bartholomew Bogue seems like a deliberate invoking of present-day Wall Street wolves. It’s not a subtle turn by any means and the character’s intimidation factor comes from the fact that he has an army at his disposal, not because he’s actually all that scary. Sarsgaard is an apt choice to play a snivelling, weaselly one-percenter, though we would’ve appreciated it if he could also throw down with the heroes.

This film features the final work of composer James Horner, who died in a plane crash two years ago. He had composed the score as a surprise for Fuqua; Simon Franglen wrote the additional music. It’s not a patch on the iconic Elmer Bernstein music from the 1960 version, but it gets the job done. While most film music connoisseurs have grown tired of Horner’s repeated use of the four note ‘danger motif’, which is very present in this score, we have to say we’ll miss hearing it.

The Magnificent Seven is not the breathlessly entertaining romp we hoped it would be, but it isn’t a shameless desecration of the classics on which it is based either. Its political allegories and inclusive casting justify its existence somewhat, and it manages to be nigh-riotously funny and pretty darn intense at the right moments.

Summary: It’s ungainly at times, but an extremely fun cast make The Magnificent Seven ’16 a decently entertaining diversion, even if it won’t be viewed as a classic.