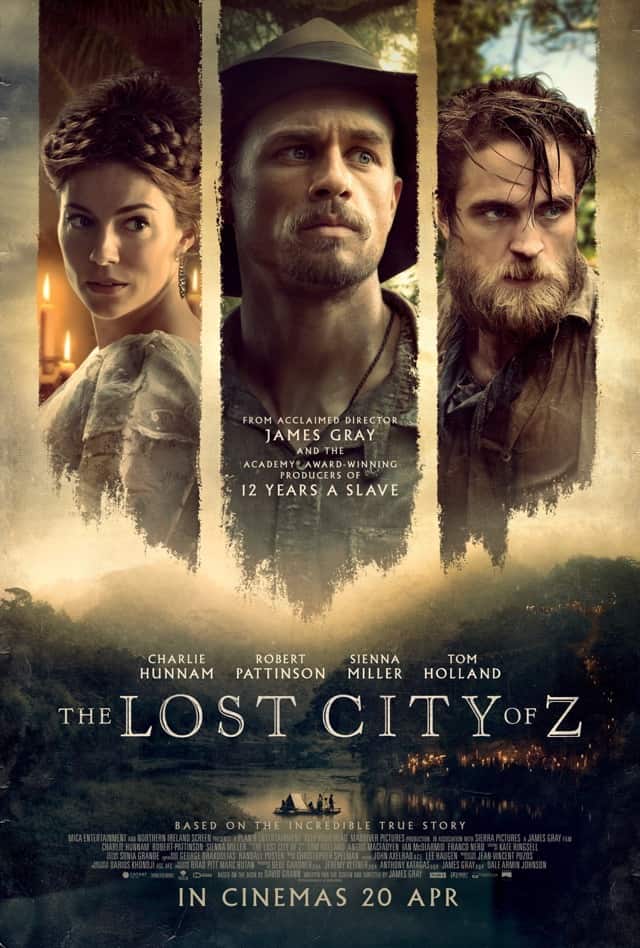 The Lost City of Z might be executive produced by Brad Pitt through his Plan B production house, but it has nothing to do with zombies. Instead, this historical drama tells the story of Col. Percy Fawcett (Hunnam), a British soldier-turned explorer. In 1906, Fawcett sets out on his first expedition at the behest of the Royal Geographical Society. Leaving his wife Nina (Miller) and his young son Jack (Tom Mulheron, Bobby Smalldridge and Holland at different ages), Fawcett departs to map an area of uncharted jungle on the border between Bolivia and Brazil. His expedition includes Cpl. Henry Costin (Pattinson) and biologist James Murray (Macfayden). Over the course of several expeditions and through befriending indigenous populations, Fawcett learns of a fabled lost city, said to be the remains of El Dorado. Fawcett dubs the city ‘Z’, and develops a single-minded preoccupation with finding this place, enduring the mockery of his peers.

The film is based The Lost City of Z: A Tale of Deadly Obsession in the Amazon, a 2009 non-fiction book by journalist David Grann. Pitt and his Plan B partners optioned the film rights in 2010, and was attached to play Fawcett. Then, he was replaced by Benedict Cumberbatch, who later dropped out due to scheduling conflicts, with Hunnam stepping in.

The story of Percy Fawcett, with its elements of history, adventure and obsession, has all the makings of a spellbinding motion picture. James Gray, who directs in addition to adapting the book for the screen, steadfastly crafts an old-fashioned film. Taking inspiration from directors like David Lean, Gray allows the grandeur to unfold. Gray presents us with detailed re-creations of Edwardian streets and costumes, location shooting in Santa Marta, Colombia, and even a sequence depicting the Battle of the Somme during the First World War. Because of Gray’s desire to make The Lost City of Z a serious historical drama, the film is sometimes stuffy, coming across like it’s putting on airs. For all its production values, the movie sometimes feels like a particularly expensive re-enactment from a National Geographic documentary.

For a film about an all-consuming obsession, The Lost City of Z doesn’t burrow very deep beneath the viewer’s skin. Gray is intent on faithfully depicting historical events, but we don’t get to spend enough time in Percy Fawcett’s headspace. While some have hailed Fawcett as a great explorer and a war hero, several historians have decried him as delusional and incompetent. It appears that Fawcett is a figure who remains controversial among the cognoscenti today, and taking this into account, The Lost City of Z is a rather staid affair. It is largely reverential of Fawcett, even though he’s portrayed with some flaws. The film’s standout scene depicts Fawcett consulting with a psychic, and things get a tiny bit trippy. Gray stated that he was aiming for a “slightly more hallucinogenic feel” than the David Lean-directed works he referenced, and perhaps The Lost City of Z could have benefitted from a few more injections of style.

All the actors are locked in to the type of film Gray is trying to make, and deliver performances befitting a stately period drama adventure. Hunnam might not yet have Pitt’s star power, nor does he have Cumberbatch’s peculiar charm, but he’s believable as a strapping heroic type, slashing through the jungle growth with a machete. It would’ve been interesting to see Hunnam tackle Percy’s burgeoning obsession in a slightly showier, albeit not cartoonishly exaggerated, manner.

As Fawcett’s right-hand man, Pattinson is hard at work distancing himself from his sparkly vampire days, sporting glasses and a bushy beard. While it’s a fine turn, it could have done with a dash more wit.

Miller’s performance is similarly respectable, but as is often an exigency of the genre, Nina is little more than ‘the wife back home’. Towards the latter half of the film, the drama hinges on Fawcett’s relationship with his eldest son Jack. Jack resents his father for neglecting the family, but eventually yearns to follow in his footsteps as an explorer. While there isn’t a lot of room for the character to develop fully, Holland does his best with the material at hand.

The Lost City of Z’s 140-minute runtime will try the patience of viewers who aren’t particularly longing for the “good old days” of classic cinema. For a film that’s promoted as an epic adventure, it doesn’t exactly quicken the pulse. However, there’s a sincerity that permeates Gray’s approach, and with the assistance of veteran cinematographer Darius Khondji, he captures the look and feel of an old-timey period piece.

Summary: The Lost City of Z is lush, majestic and finely acted, but it lacks a rousing, viscerally exciting sense of propulsive adventure.