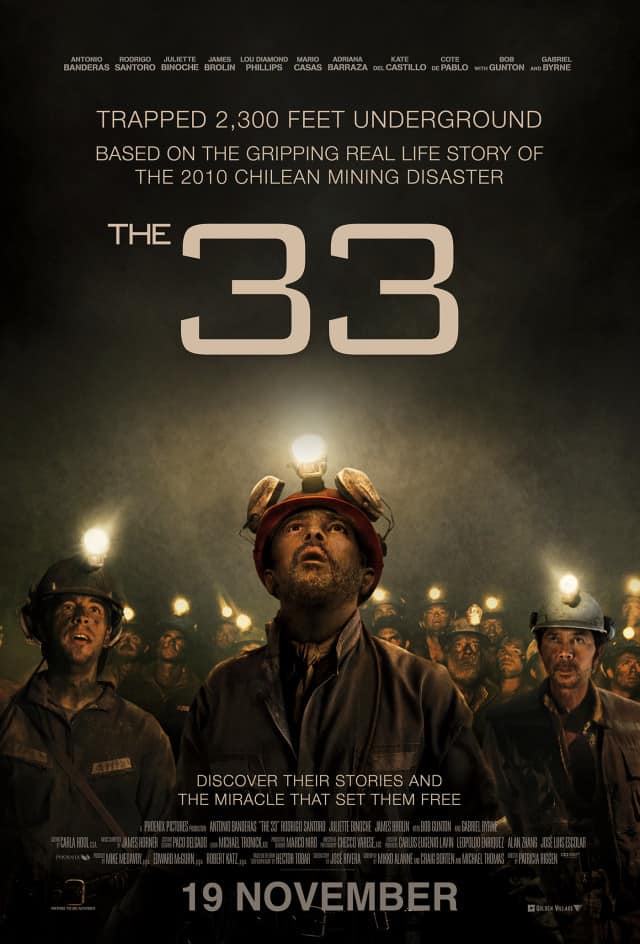 From the Atacama Desert in Chile comes the true story of courage and perseverance under pressure and underground. On Thursday, 5 August 2010, a major cave-in at the San José copper–gold mine traps a group of 33 miners 23 000 feet under the surface. The group is led by Mario “Super Mario” Sepúlveda (Banderas) and shift leader Luis “Don Lucho” Urzúa (Phillips). Among the 33 is Álex Vega (Casas), whose wife Jessica (de Pablo) is pregnant with their first child, and the troubled Darío Segovia (Raba), who is on poor terms with his empanada vendor sister María (Binoche). As the loved ones of the stranded miners grow restless with no news on the well-being of the 33, Minster of Mining Laurence Golborne (Santoro) coordinates the rescue efforts, collaborating with chief engineer André Sougarret (Byrne). As the nation of Chile and the world at large rallies around “Los 33”, rescuing the miners becomes a priority for the Chilean government, headed by President Sebastián Piñera (Gunton). In the face of insurmountable odds, faith and blue collar spirit must win the day. 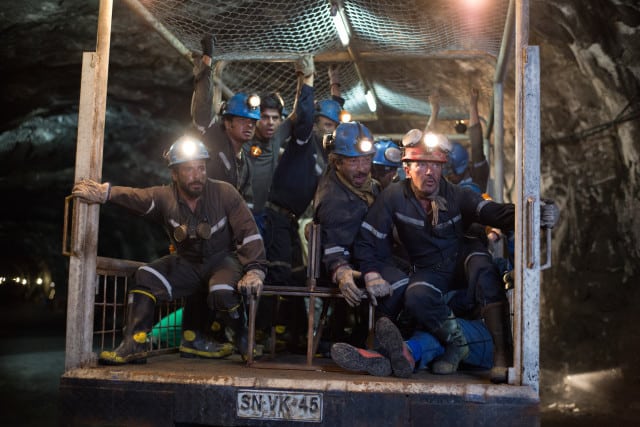 The 33 is based on the book Deep Down Dark, journalist Héctor Tobar’s account of the 2010 Copiapó mining accident. The film is in the English language and is clearly gunning for mass appeal, couched as an inspirational tearjerker that is a celebration of the “triumph of the human spirit” and all that good stuff. It may seem cold of us to be this cynical, but nearly every move The 33 makes seems right in line with established disaster/survival story formulas. Also, the ordeal was so well-documented that practically everyone who goes to see the film would already know the outcome, and the process leading to said outcome as depicted here is rather tedious. Structurally, The 33 is primarily comprised of a “three steps forward, two steps back” dance of some progress being made, only for the rescuers and/or miners to run into a setback before breaking through again. It gets repetitive rather than riveting the longer it goes on.

Director Patricia Riggen does make some solid stylistic choices, and even though the 33 miners are cooped up in a small refuge underground, the story does have sufficient scope to it. The scene of the initial collapse is frightening and harrowing and the production values can’t be faulted, with the environment coming across as suitably foreboding. In a bid for added realism, actual news footage is spliced in and Chilean TV present Mario Luis Kreutzberger Blumenfeld, better known as “Don Francisco”, plays himself. The miners’ Catholic faith and how their belief played a key role in sustaining them is also showcased. 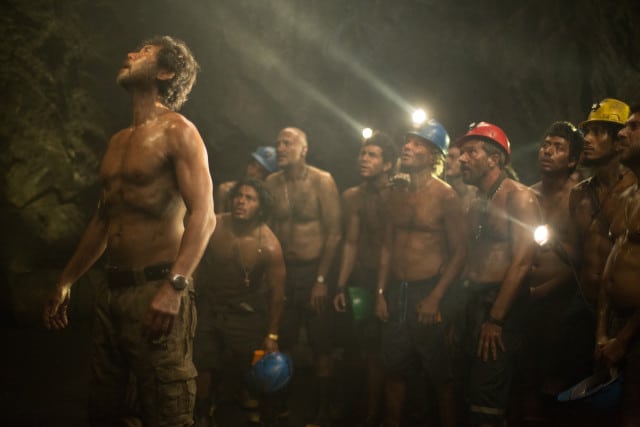 There is a scene in which the exhausted, starving miners fantasise about their loved ones bringing them the favourite foods they have so craved. It is corny and a little silly, but it possesses a combination of warmth, levity and sad longing that lifts the film above the standard tropes it presents us with up till that point. This reviewer found that to be the movie’s single most memorable moment.

Every time a film based on a true story is made, there must be a bit of a dilemma with regards to casting. While a marquee name draws the crowds, thus drawing attention to the film, this might also pull the viewer out of the story. Banderas does bring plenty of star quality to bear as the charismatic and earnest “fearless leader”, though his performance is a touch theatrical at times. Phillips is something of an underrated actor and he’s excellent here as the second-in-command. Naturally, 33 characters is too many for each to be meaningfully developed, so the fact that most of the miners blend together can’t be held against the film. 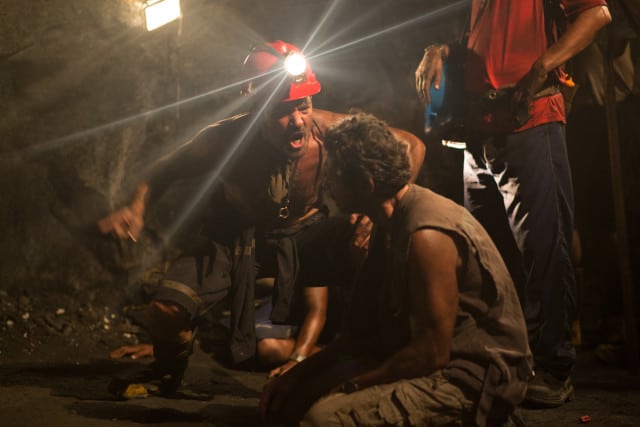 The casting of actors of different nationalities and ethnicities from the real-life figures they’re portraying achieves varying degrees of success. Binoche is commendably convincing, but Gunton’s accent slips a whole lot. Santoro is well cast as the slick Minster of Mining, because we’re conditioned to expect that a handsome government guy in a suit won’t actually get anything done. The interplay between Golborne and head engineer Sougarret is sometimes more interesting than the interaction among the miners themselves.

There’s a scene around the middle of the film when de Pablo (who is actually from Chile), sitting with others around a fire at the base camp, tearfully sings a ballad expressing how she years for her husband to be returned to her side. That’s only one of many melodramatic moments in The 33. Sure, there are parts that manage to be genuinely moving, but it’s all pretty obviously engineered. Engineered entertainment value is a whole different ball game from engineered pathos. One gets the feeling that this story would be better served by a documentary featuring interviews with the real-life miners, their family members and the engineers and officials who orchestrated the rescue interspersed with re-enactments, as opposed to a generic survival drama movie. 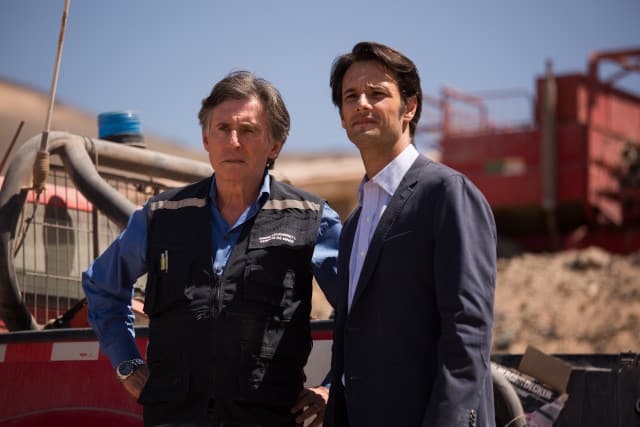 Summary: The true story of the 33 Chilean miners is inspiring, but this film is a rather rote affair that is occasionally lifted by good performances and strong production values.