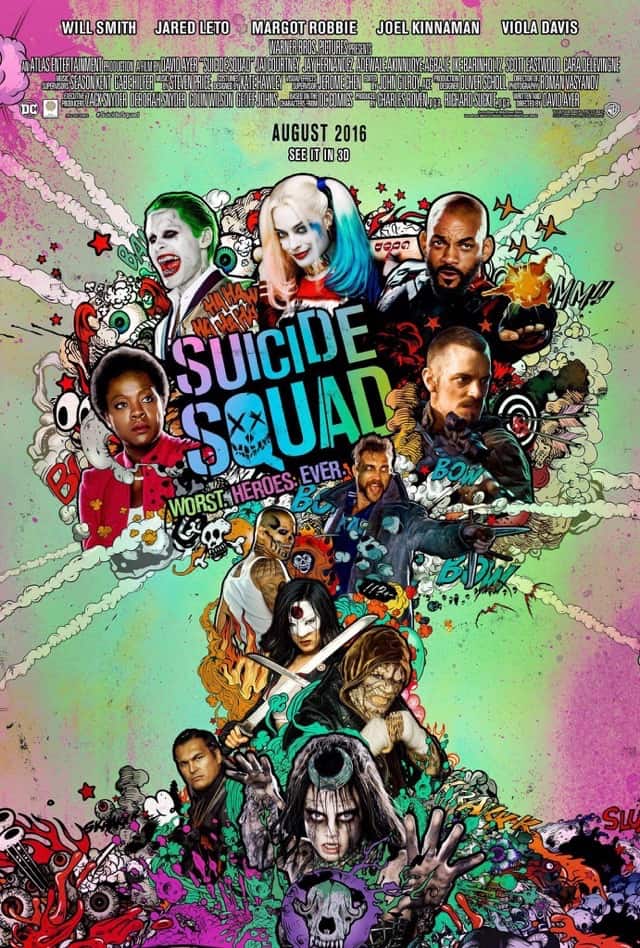 The heroes of the DC Extended Universe (DCEU) have been pretty sullen thus far, so here we get to know if bad guys really have more fun (spoiler: they do). Government official Amanda Waller (Davis) assembles ‘Task Force X’, a covert team of supervillains coerced into doing her dirty work. On the roster are hitman Deadshot/Floyd Lawton (Smith), the unhinged ex-psychiatrist Harley Quinn/Harleen Quinzel (Robbie), cannibalistic beast Killer Croc/Waylon Jones (Akinnouye-Agbaje), Aussie bank robber Captain Boomerang/Digger Harkness (Courtney), pyrokinetic gangster El Diablo/Chato Santana (Hernandez), assassin Slipknot/Christopher Weiss (Beach) and the possessed archaeologist Enchantress/June Moone (Delevingne). Wrangling the team are elite operative Rick Flag (Kinnaman) and swordswoman Katana/Tatsu Yamashiro (Fukuhara). When a powerful mystical entity throws Midway City into chaos, Task Force X are sent in to mitigate the situation. Between the in-fighting, Waller’s machinations and the intervention of the Joker (Leto), the object of Harley’s affections, it will be anything but smooth sailing.

This year’s Batman v Superman took quite the beating from critics and while many conceded that the extended Ultimate Edition was a massive improvement, the damage was done. The DCEU has a great deal of catching up to do, seeing as how Marvel continues to rule the roost at the cinemas. A Suicide Squad movie is a step in the right direction: it’s smaller than your typical superhero blockbuster so it won’t feel bloated, DC has a rich menagerie of villains to play with, and it won’t take itself too seriously. Writer-director David Ayer is an excellent get: he has a proven track record of grimy, street-level flicks carried by characters who wouldn’t normally be considered likeable. This is messy fun, akin to splashing about in mud. It’s not always pleasant, nor is it meant to be, but it’s enjoyable in its own way.

There’s plenty of dark comedy to be mined from the inherent dysfunction of the titular team, and while some of the jokes feel crowbarred in, the tone is generally appropriate for the material. The dialogue occasionally sounds like it’s trying too hard to sound tough, but the interplay within the team is engaging. At 123 minutes, it’s a smidgen too long, with multiple flashbacks required to fill the audience in on the backstories of our many characters. However, it scuttles along at a satisfactory pace and the action flies thick and fast. It’s far from the most aesthetically pleasing comic book film and it’s easy to see why several design choices (most having to do with Joker and Harley) have been decried by fans. However, there are moments that are visually exciting, and the lack of polish belies a healthy amount of visceral thrills.

Ayer does a decent job of juggling quite a number of characters, by delineating which ones are worthy of exploration, and which ones just serve to fill a slot on the attendance sheet. The film retains the key component of Deadshot’s attachment to his daughter, and casting Will Smith means no matter how many times the character proclaims he’s a “bad guy”, we’ll have at a least a little sympathy for him. The emotional moments don’t work as well as they should, but Deadshot is appropriately quippy and cocky, with Smith’s charisma serving as a rallying point for the rest of the film. Does his star power pull one out of it? It turns out, not as much as you’d expect.

Harley Quinn is a fan-favourite for many reasons, and when the character was reinvented during DC’s New 52 comics reboot, writer Adam Glass even received death threats. As such, Robbie’s performance won’t fit the ideal Harley in everyone’s heads, but this reviewer feels she displays a good understanding of the character, sprightly physicality and is immense fun to watch. Harley’s twisted joie de vivre is faithful to the source material, even if the outfit she sports for the bulk of the movie isn’t.

The Joker is wisely not overused. Leto’s on-set antics, including mailing a severed pig’s head to co-star Davis, raised a lot of eyebrows. He makes for a fine Joker who feels like he fits right into this particular cinematic universe, and it might sound silly, but this reviewer was thrilled to hear Harley call the Joker “Puddin’” and “Mistah J” on the big screen. It’s not as virtuosic a performance as the late Heath Ledger’s, but it fits the requirements of the story. Similarly, the way Batman is used in the narrative is just right – it’s not a sizeable part, but he does make an impact and provides connective tissue to the rest of the DCEU.

A key factor in making the audience buy the outlandish premise is by putting someone scary enough in charge, and Davis’ authoritative presence anchors Suicide Squad. Her Amanda Waller is nigh perfect, no-nonsense and manipulative without being one-note, and Davis’ gravitas is a force to be reckoned with. Kinnaman is probably a better fit for the straight arrow soldier than the originally-cast Tom Hardy would’ve been.

Courtney is a hoot here – he may have had little success as a cookie cutter action hero, but as the crass Aussie thug, he’s right on the money. Hernandez provides a surprising amount of heart as the repentant former gangster, while Akinnuoye-Agbaje competently fills the role of burly big guy (Croc’s head just seems too big for his body). Alas, Delevingne isn’t convincing as an archaeologist or as an ancient witch. The central antagonist, whose identity we shan’t spoil, serves as a formidable physical and psychological threat to the Squad while not requiring too much characterisation, so we can focus on the team members themselves. It’s also convenient that the villain’s minions are faceless monsters, so they can get shot at and hacked apart in graphic fashion without breaking the PG-13 limit.

Suicide Squad has its flaws, but the film scores a victory in not trying to ape the Marvel Studios formula. Like its central characters, it’s unpolished and rough around the edges. It’s spirited and entertaining without sacrificing too much of the graveness that has become DC’s calling card at the movies. The story is relatively easy to follow even for a neophyte, but fans will be rewarded with a couple of cool cameos and plenty of Easter Eggs, including a respectful nod to writer John Ostrander, who co-created the Suicide Squad team in the comics. Stick around for a mid-credits scene after the main-on-end titles.

Summary: It won’t please everyone, but Suicide Squad is an ideal marriage of director and comic book property. Jump on in and get messy.