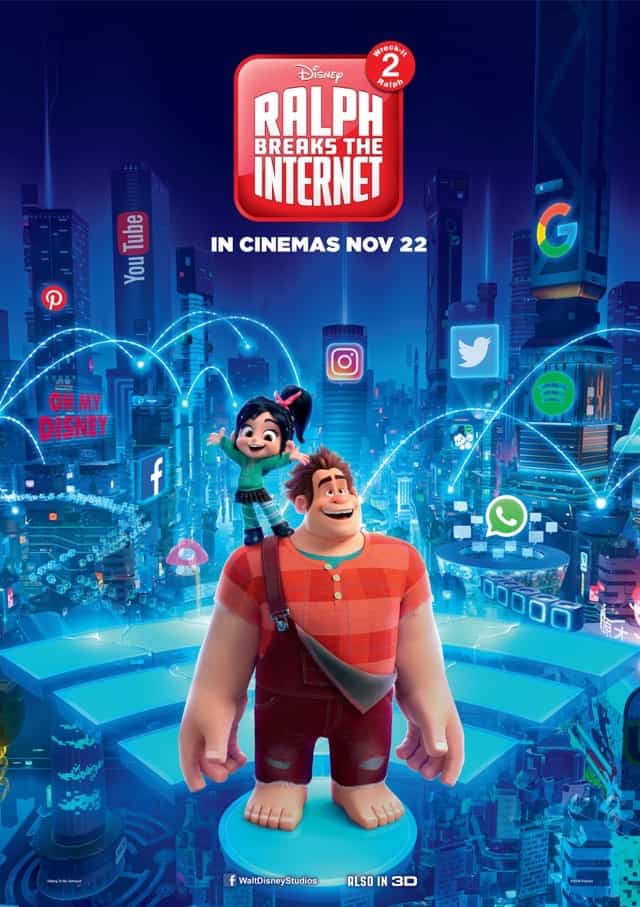 The Low-Down: Ralph Breaks The Internet is the sequel to 2012’s Wreck-It Ralph, one of Disney’s most inventive and beloved films. The first movie mined comic gold from nostalgia, bringing to life a host of video-game favourites from the ’80s and ’90s. This new film addresses the technology we have today: Ralph (voiced by John C. Reilly) and Vanellope Von Schweetz (Sarah Silverman) head into the crazy wilderness of the Internet in a bid to save her game from being unplugged for good.

The Good: The film smartly keeps its emotional focus on the wonderful friendship between Ralph and Vanellope, and is all the better for it. There’s a great deal of wonderful comedy in Ralph’s desperate efforts to save Vanellope (who, as it turns out, might not want to be saved anymore) – including going viral. Ralph Breaks The Internet is unexpectedly mature in reminding audiences about the value of unconditional love between friends – that your friends can make you better, smarter, and more loving than you ever thought possible. You might find yourself sobbing at the grief and the growth that both Ralph and Vanellope experience as their friendship deepens.

The Not-So-Good: Much of the film’s commentary on the social-media age in which we love works quite well, from over-eager search engine Knowsmore (Alan Tudyk) to sassy algorithm queen Yesss (Taraji P. Henson). But why are some well-known elements of the Internet given new names (Buzzfeed and YouTube merged into BuzzTube, for instance), while others aren’t? It ends up feeling like product placement – for eBay, in particular. Also, the sub-plots for new character Shank (Gal Gadot), as well as old favourites Fix-It Felix (Jack McBrayer) and Calhoun (Jane Lynch), work, but also feel somewhat inconsequential.

Knockout Moment: The Disney Princesses win the Internet! This is definitely product placement but it works beautifully because it’s done with so much tongue-in-cheek affection for the entire Disney Princess franchise. The first Wreck-It Ralph film introduced Vanellope as the Mouse House’s most intriguing princess yet – full of spunk, fire and a refusal to abide by the usual princessy tropes – but didn’t really do much with it. Here, Disney deconstructs itself: gifting Vanellope with her own ‘I want’ princess song, while giving its other princesses (from Elsa and Anna to Mulan, Belle, Snow White and more) the chance to comment (and act) on the not-always-very-feminist stories of which they were a part.

Watch Out For: The easter eggs in the credits – the one at the very end is pure genius.

Recommended? Absolutely. It’s not as utterly wonderful as the first film – the script is a little clunkier and the nostalgia factor replaced with a world-wide-web-weary cynicism. But the big, beating heart embedded in this story is a true delight. The Princesses alone will be worth the price of your ticket.