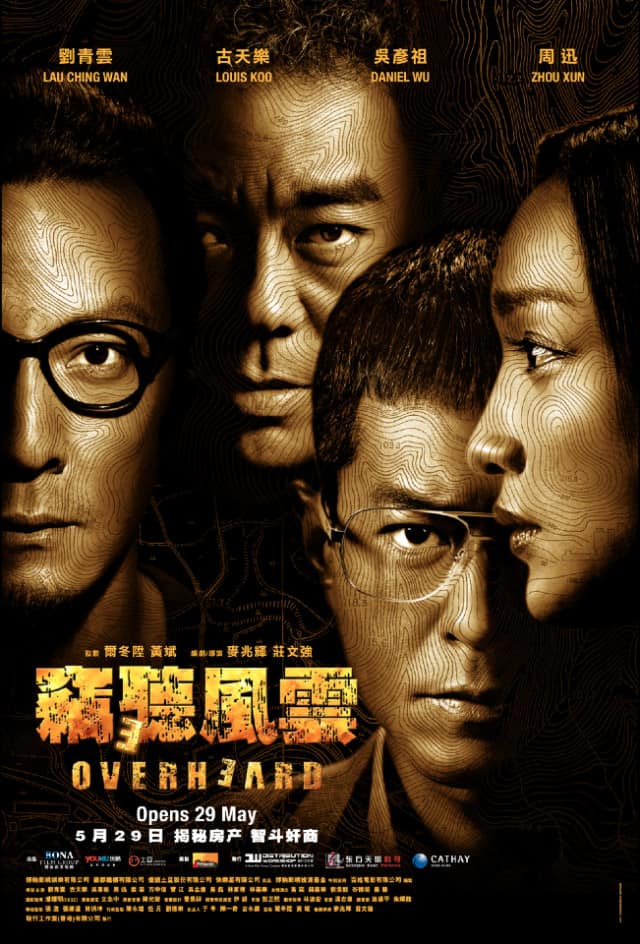 Five Years ago, LAW (Louis KOO) was jailed for killing a major land owner in a car accident. At that time LAW worked as a chauffeur for the rural tycoon LUK(Kenneth TSANG).

It was rumored that LUK was behind such land owner’s death, which gave LUK a competitive edge in the native apartment development deal. Before the Hong Kong handover in 1997, every native, male resident in the New Territories was granted the right to build a house. Yet it had caused social unrest over the land right, until recently the government decided to gather all of the remaining land rights from these residents and plan to build taller apartment buildings. LUK wished to swallow the enormous project and this started the fights between LUK, the land owner and other real estate developers.

When LAW gets out of prison five years later, the world has changed. LUK’s corporation has grown more powerful, while LUK’s right-hand man Keung (LAU Ching Wan), sworn brother of LAW, has his own agenda to pursue. But things take a surprising turn.

With the help of LAW’s prison mate and computer whiz Joe (Daniel WU), LAW drugs Keung and his brothers in the drinks, then modify their mobile phones for wiretapping.

Joe gets acquainted with the materialistic single mom Eva (ZHOU Xun), who turns out to have a dark history with both LAW and KEUNG. Through the eavesdropping, LAW realizes Keung’s ultimate plan, which may change Hong Kong’s land development forever.

The Overheard franchise is built on a fascinating premise: each film in the trilogy spins a thriller from the high-tech world of electronic espionage and surveillance, but the stories don’t connect. Instead, the same core group of three actors – Louis Koo, Sean Lau and Daniel Wu – take on different roles, whether as cops (Overheard 1), stockbrokers (Overheard 2) or wannabe property magnates. This third film pulls off the oddly miraculous feat of being surprisingly watchable even though its plot – centred on the complexities of Hong Kong’s property market – is almost catastrophically murky.

In a small country where land is scarce, there’s much money to be made from the land rights pledged to every native male resident in Hong Kong’s New Territories. Keung (Lau) and his three brothers (played by Alex Fu, Gordon Lam and Dominic Lam) are wheeling, dealing and doing everything they can to get a huge slice of that pie. They believe that Jau (Koo) is on their side, especially after he ploughs a car into a business rival and sits in jail for five years to prove his allegiance. But, really, Jau is keeping close tabs on Keung et al, his loyalties perhaps foolishly pledged to Yu (Michelle Ye), the driven daughter of Uncle To (Kenneth Tsang) – who is himself trying to set up a lucrative business deal with Chinese investor Wan (Huang Lei).

The story gets increasingly complicated as the film goes on, with subplots sprawling out in every direction. As the men talk and barter and fight over land rights, no houses actually get built, and the noble village people teach the arrogant city folk that land is for tilling and not for sale. (Or something like that.) We also meet Eva (Zhou Xun), a resourceful single mother – as it becomes increasingly clear to the audience just who she is, we learn that she will play an important role in the lives of both Keung and Joe (Wu), Jau’s tech expert. After a point, it becomes tough to remember – or care – just how the entire complicated web of relationships works.

What’s so surprising about Overheard 3 is that it remains a tolerably engaging watch despite its many flaws. The story is a mess, but the script has moments of surprising insight. It’s a rare and unusual film that can lose track of its plot while still keeping its characters fascinating, but Overheard 3 somehow manages to pull it off. Keung has a humanity and depth that keep him from being the film’s easy villain, just as Jau’s fatal flaw is shown to be also his greatest strength: his devotion to the one he loves. Of course, the entire enterprise is helped immeasurably by the fact that its cast is very good. There are even bursts of welcome humour scattered throughout the movie.

By the time the film dives headfirst into its manic brick-tossing, car-tipping finale, you would either have written it off or given in to its odd rhythm and charms. Overheard 3 is not, strictly speaking, a good film. However, disregard the twists and turns of its unnecessarily labyrinthine plot, and it will prove a strangely compelling watch.

Summary: Its plot is remarkably iffy and unnecessarily dense, but this thriller still packs a punch with its interesting characters and unexpected moments of insight and humour.