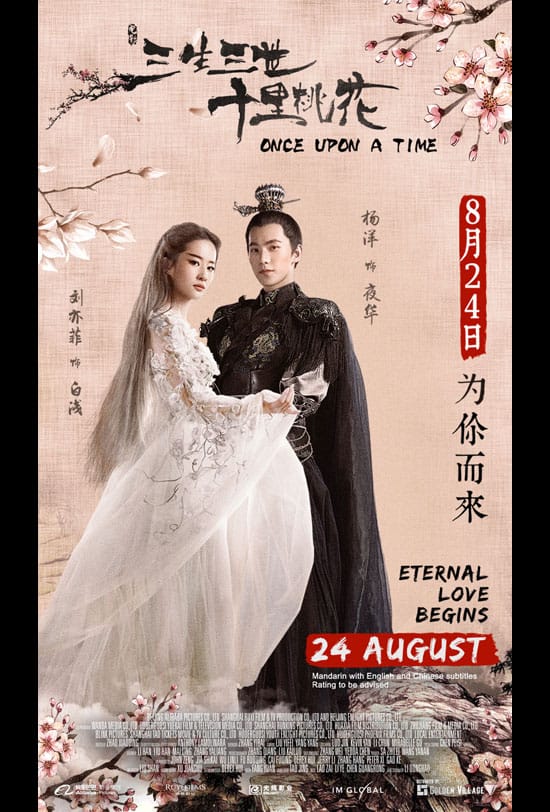 Based on a widely enjoyed Chinese fantasy novel by Tang Qi, 三生三世十里桃花, which literally translates to “Three Lives Three Worlds, Ten Miles Of Peach Blossoms”, Once Upon A Time attempts to condense an 800-page love story into 109 minutes with flair but scant success. Moviegoers who have neither read the novel nor watched the drama series of the same Chinese title (English title: Eternal Love), would leave the cinema more confused than ever.

Co-directors Zhao Xiao Ding and Anthony LaMolinara are veterans as far as film production is concerned, but their lack of experience in directing took a toll in the film’s pacing with poor development of practically every character except the female lead, played by Crystal Liu Yi Fei. The film leaps from scene to scene, exposing an amateurish grasp of the need for proper connectivity and continuity.

Zhao and LaMolinara however deliver in the technical department, showcasing excellence in their native expertise. The cinematography and CGI are undoubtedly top-notch, immersing the audience in an irresistible fantasy universe anyone would want to live in. As the title suggests, the audience sees three beautiful worlds – Heaven, Earth and East China Sea – where the deity couple meets, fall in love and separate over a period of what seemed like three lifetimes.

The film focuses on two areas of the Heaven World – Heaven Palace and Qing Qiu (literally translates to Green Hill). The Heaven Palace is breathtaking, with shimmering golden structures surrounded by paper white clouds. Qing Qiu resembles Earth but with more vibrant forests, gardens and hot springs. We see little of Earth, most scenes were shot on top of a mountain with peach blossoms and a wooden hut. The East China Sea, where our star-crossed lovers meet for the first time is almost hilarious. The exaggerated bright hues and tones of the corals and underwater environment were too jarring, not to mention the painfully obvious green screens. Fortunately, most of the film takes place in the heavenly realm.

Liu performs the roles of Bai Qian, a nine-tailed white fox High Goddess and Empress of Qing Qiu. At different points of her life, she wore two other names, Siyin and Su Su – the former when she conscripted herself into the divine army and the latter when she was sent to Earth to experience mortal suffering. With 15 years of acting experience under her belt at a young age of 29, Liu’s performance was exceptional throughout the film, nailing every action and romance scene as if Bai Qian was created for her.

Yang, who also played more than one character in the film – Mo Yuan and Ye Hua – fits perfectly into his role as the Dragon Crown Prince of the Heaven Palace. He is a pretty boy with a doll-like appearance, making him and the beautiful Liu a literal match made in heaven. However, Yang’s consciousness of maintaining his mannequin-like appearance affected his performance, making him slightly stiff and even awkward on screen at times. Still, his eye-candiness should compensate for his mediocre performance as compared to his experienced co-star, Liu.

As with every romance story, we have a character that goes through lengths to break the main couple apart. Chun Li tries hard to be detestable while staying pretty, and like Yang, her consciousness to uphold her elegance is apparent and seeps into her acting.

The first half of the film was rushed through with the last 25 minutes struggling to bridge the initial gaps in the narrative. Due to the sloppy stringing of crucial plot points, what could have been a satisfying romance story became a complex love fable without proper closure. The film’s saving grace was perhaps Liu’s performance, gorgeous special effects and the sheer aesthetics of the characters.

Summary: Once Upon A Time starts off with little explanation but captivates with stunning visuals, only to leave audiences gasping for air as it rushes through a novel-length Chinese fable.