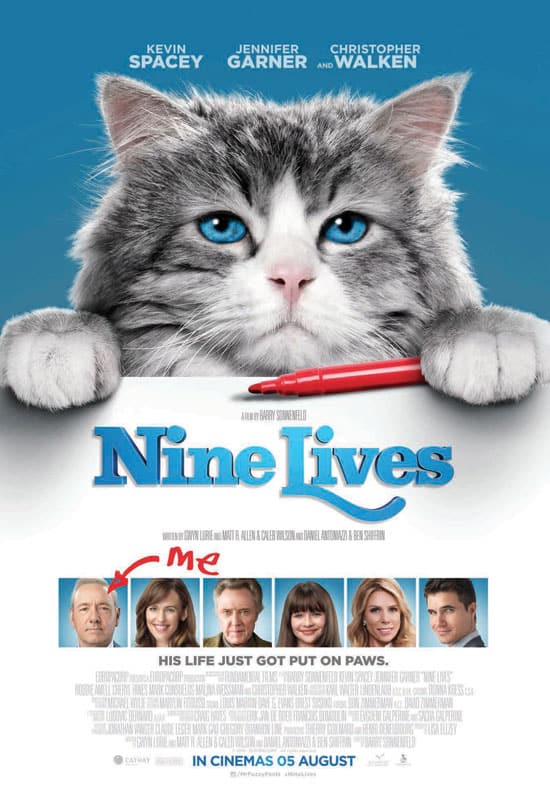 To paraphrase Brad Pitt’s David Mills in Se7en, “aww, what’s in the litterbox?” Kevin Spacey is forced to embrace his feline side in this family comedy. Spacey plays Tom Brand, the owner of the multi-billion-dollar corporation Firebrand. The company is on the verge of unveiling its new headquarters in New York, set to be the tallest skyscraper in the Northern Hemisphere. Preoccupied with beating a competing high-rise being constructed in Chicago, Tom neglects his wife Lara (Garner) and young daughter Rebecca (Weissman). He also refuses to give David (Amell), his son from his first marriage who is also a Firebrand employee, the time of day. Rebecca wants a cat for her birthday, so Tom begrudgingly heads to a pet store to get her one. Felix Grant (Walken), the proprietor of a pet store named ‘Purrkins’, sells Tom a Norwegian Forest cat dubbed ‘Mr. Fuzzypants’. After an accident leaves Tom in a coma, his spirit is transferred into Mr. Fuzzypants. The cat has to convince Lara and Rebecca that he actually is Tom, while Firebrand exec Ian (Consuelos) threatens to take over the company.

There’s something fishy going on here, and it’s quite possible that the story behind the making of Nine Lives is a fascinating showbiz farce involving lost bets and blackmail. We can’t prove this, of course, so we would like the EuropaCorp lawyers to hold off. Yes, this comes from Luc Besson’s production company, stars Kevin Spacey and is directed by Barry Sonnenfeld of Men in Black fame. It’s a weird set of people to be collaborating on a family movie which would be right at home on the Disney Channel. And it’s so obvious we shouldn’t need to point it out, but yes, this is a wholesale rip-off of Disney’s own The Shaggy Dog – a rip-off that required a staggering five screenwriters to assemble. Even weirder, Sonnenfeld has a self-professed dislike for cats and is allergic to them. “Dogs can be trained, but dogs work for love and food,” he said in an interview “Cats don’t care about love and really don’t care that much about food, either.” This total lack of a desire to be there does show in the work.

“I’ve got a wife, an ex-wife and two kids. I don’t need another thing to feed,” Tom scoffs early on in the movie. It’s a cliché through and through – the ambitious businessman consumed by his job, placing no value on human connections, who has to be taught a lesson by way of some magical realism. It’s never exactly explained what products or services Firebrand offers, though Tom’s face on the cover of Wired magazine implies it’s some sort of tech juggernaut. It’s hard to imagine that Spacey is aching for cash, what with insiders speculating that his per-episode salary on House of Cards is $1 million. Still, he isn’t exactly phoning it in, and for the bulk of the movie he’s performing Mr. Fuzzypant’s inner monologue (so no CGI mouths grafted onto actual cats). The deadpan delivery makes the lines a fair bit funnier than they have any right to be. And it’s not like it’s possible for a performer like Spacey to make material like this worse. Norwegian Forest cats Jean, Philmon, Connery, Roxy and Yuri are credited as playing Mr. Fuzzypants – they may not be Oscar winners like Spacey is, but credit where credit is due.

Garner’s recent filmography features a significant proportion of safe family comedies, and there’s not too much to say about her performance here. Weissman, whom some might recognise as young Kara on Supergirl, is sufficiently likeable as a daughter yearning for her father’s care and attention. Cheryl Hines is reasonably funny as Tom’s catty ex-wife, and the hunky Amell is believably earnest as a son seeking his father’s approval. Walken is basically reprising his role from Click as the mystical store-owner who gives our protagonist a dose of self-reflection. Walken is a reliable ‘one scene wonder’, but his scene-stealing prowess is not on display here.

If you’re a cat-lover, there are plenty of adorable shenanigans performed by both animal actors and computer-generated felines to take in. However, a stiltedness and insincerity permeates Nine Lives. There really aren’t too many wildly inappropriate jokes beyond the standard “cats peeing/getting neutered” chestnuts, but one has to question the decision of having a company’s Initial Public Offering be a crucial plot point in a family film. The movie’s climax also takes an unexpectedly dark turn. The visual effects work is conspicuous, but not laughably terrible. On the level of a “so bad it’s good” curiosity, Nine Lives is fodder for a drunken movie night with friends and there’s a degree of enjoyment in seeing Spacey muse about urinating in a handbag. That said, it’s hard to recommend spending even one dollar on Nine Lives.

Summary: Director Barry Sonnenfeld coughs up quite the cinematic hairball. We’re still very curious about what made Kevin Spacey say yes to this one.