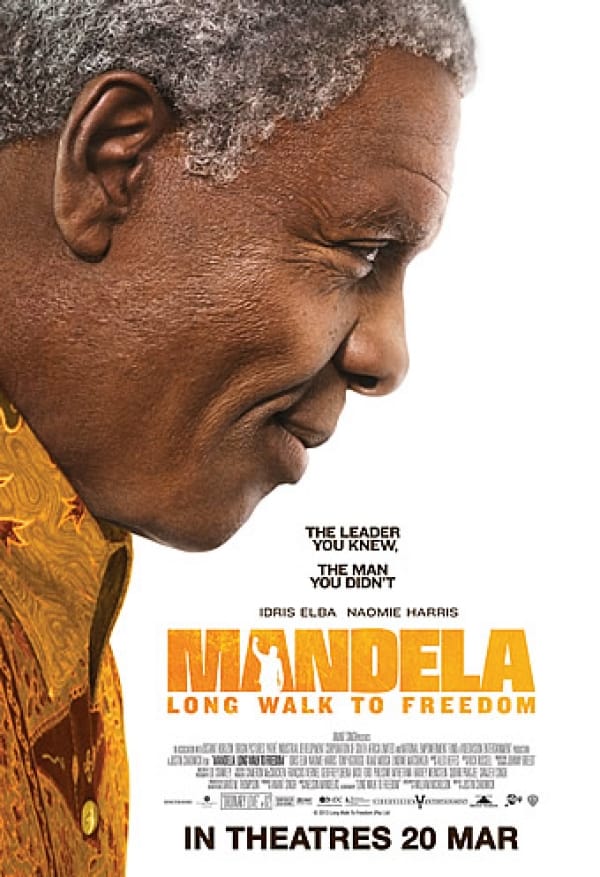 There aren’t many people who have lived a life as interesting and inspiring as Nelson Mandela. The man who fought to dismantle apartheid – the deeply unfair, institutionalised system of racial discrimination in South Africa – has a story well worth telling. Mandela: Long Walk To Freedom makes a halfway decent attempt at doing so, quite effectively capturing the transcendent effect Mandela had on politics the world over. But, as a film, it’s a tougher pill to swallow. Its pacing is slow and the narrative drags at times, giving the impression that the movie has run out of story. And yet, it barely digs beneath the surface of the man and his politics.

We first meet Mandela (Elba) as a child, growing up poor but surrounded by rich traditions in a rural village. Over the course of the next few decades, he becomes a lawyer, then a revolutionary, a political prisoner, and the first democratically-elected president of South Africa. Along the way, he sacrifices any sort of personal pleasure: he drifts away from his second wife Winnie (Harris) during his long incarceration, and doesn’t get to watch his daughters grow up. By the time he meets his children again, he is more symbol than person: an idea rather than an actuality.

Mandela: Long Walk To Freedom is a competent, if not particularly stirring, biopic. It covers all the major milestones of Mandela’s life: his pro bono work as a lawyer; his first encounter with the young, beautiful Winnie; the rough and tumble protests that consign him to 27 long years in prison. In broad strokes, it paints an impression of a difficult life well-lived, as Mandela goes from persona non grata to undeniable political force: the one person that the despairing white politicians end up going to for advice.

But, for all that it serves as a good primer for people unfamiliar with Mandela’s history and politics, there’s not all that much of the man himself in Mandela: Long Walk To Freedom. His plight, his achievements and his struggles are dutifully checked off a list but there’s precious little sense of the troubles and triumphs that he no doubt experienced within himself. His prison-bound evolution from radical revolutionary to someone staunchly committed to peace and non-violence is left, frustratingly, opaque. The narrative, too, moves almost painfully slowly over a hefty 147-minute running time, plodding when it should race and soar.

Elba – in heavy make-up which ensures that he looks nothing like Mandela or himself – plays the part calmly and evenly, a stately presence lending a quiet power to the film around him. Harris is quite riveting as Winnie, whose estranging transformation into a hard-line political zealot is possibly the more intriguing one in the film. In Harris’ gritty, wild-eyed performance, there’s a sense of the mother driven to the edge of reason by the ordeals she suffers: a less praiseworthy, but perhaps more understandable, reaction to the political forces that have robbed her of her rights and freedom.

To be honest, it does feel rather churlish to think badly of Mandela: Long Walk To Freedom. It’s hard to criticise the man and his legacy, and certainly the film builds up a strong case for the political revolution that sprang up around him. But there’s no doubt that Mandela deserves something as lively and impassioned as his agenda: not a biopic that feels like it was plucked from a brief, occasionally perfunctory, textbook about his life.

Summary: An ordinary biopic of an extraordinary man.