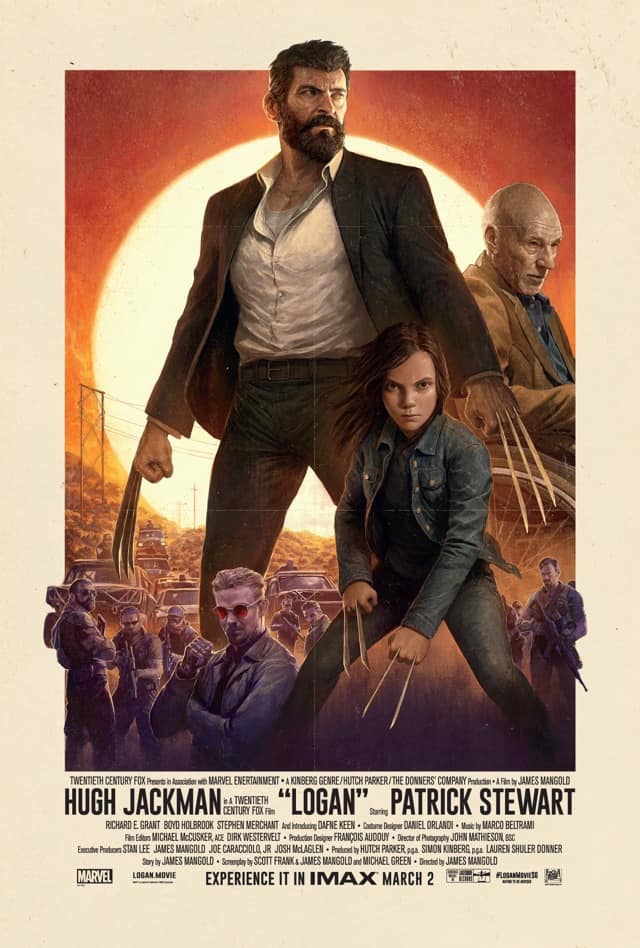 Let’s cut to the chase, shall we? In every beat, every frame, every moment, Logan feels like the Wolverine movie Hugh Jackman has been waiting (and training) for 17 years to make. Set free of a PG rating, this wildly kinetic film has plenty of gore, action and violence pumping through its veins. But what makes this one of the finest superhero movies ever produced is the big, messy, somewhat broken heart beating at its core.

Set in a grim near-future where very few mutants remain alive, we meet an unthinkable incarnation of our favourite enclawed superhero: one who’s decidedly past his prime. This is not the near-immortal Wolverine we remember, but Logan (Jackman): a broken, far older man who feels the weight of every wound inflicted upon him. His once-formidable body – tattooed with scars that aren’t healing as fast or as well as they used to – seems to be failing. It’s only his determination to keep the ailing, ageing Professor Charles Xavier (Stewart) safe and alive that never falters.

The film’s plot kicks into overdrive when Logan’s fate becomes entangled with that of Laura (Keen), a close-to-feral young girl who brandishes claws and fury as fierce and lethal as Logan’s own. As the unlikely trio go on the run, we see echoes of Logan himself in Laura’s terrifying rage and the tentative emotional connection she forges with Xavier. It’s one of many smart moves on the part of James Mangold, who does double duty as director and co-writer. Bringing Laura into the picture allows him to explore Logan’s trauma, regret and hope through the filter of this pint-sized powerhouse’s origin story.

In effect, Mangold has placed an intimate family drama squarely at the heart of this ostensible blockbuster film – strip the characters of their superpowers and Logan would still pulse with plenty of heartbreak and humanity. Logan keeps dragging himself through the world when one suspects all he wants to do is die. Xavier grapples with his own frailty as his once-sharp mind deteriorates and betrays him, again and again. Laura is a tough, tender mess of contradictions: a victim of horrific abuse but also a warrior in the making. Watching them interact – fighting, screaming, arguing, glaring and, once in a while, forgiving – will elicit laughter and tears (lots of tears), in a way that no other superhero film to date has quire managed.

That doesn’t mean, however, that Logan is an entirely joyless, sombre affair. Far from it. It proves, quite conclusively, that films in this genre can plumb the darkest of psychological depths while finding welcome ways to leaven the misery. (Note: this is something Zack Snyder would do well to learn as he continues to expand DC’s largely mirthless cinematic universe.) Mangold threads moments of genuine humour into the proceedings – from casual shoplifting and runaway horses, to an ornery old man who refuses to take his pills.

The fast and furious action beats in Logan are also quite delightful to witness. The violence that’s on full, bloody display is dark and horrible, but somehow fitting for this film in which there really are consequences for battles fought and lost. It’s only when you see Logan’s claws plunging into flesh, shearing cleanly through meat and bone, that you realise just how neutered and family-friendly his earlier outings were. There’s a slow-motion sequence halfway through the film, as Logan struggles to get to an embattled Xavier, that’s gritty and beautiful to watch – as thrilling as that scene-stealing Quicksilver moment in X-Men: Days Of Future Past. And it goes without saying that watching Laura gracefully spin and slice her way through oncoming attackers manages to be terribly wrong and wonderfully right at the same time.

To be quite frank, none of this would work without the incredible cast, all of them doing award-worthy work that will, sadly, be overlooked because their characters have such silly things as ‘powers’. It’s truly unsettling to watch Stewart dig beneath his natural gravitas to find the shaken core of a Professor X who’s semi-consciously losing grip of his mind – the best and most dangerous mind in the universe. Keen is a revelation. Grabbing this breakout role by the throat and making it very much her own, she somehow manages to convey Laura’s childish fragility and overpowering strength, often in the same breath.

And, finally, there’s Jackman. He’s been training for and playing the role that catapulted him to global stardom for 17 years now, and he brings everything he has to this final outing as Logan. He nails Logan’s physical tics, of course: from his grizzled and aged demeanour, to his rattling cough and copious drinking. But Jackman also takes delight in unearthing the dark sadness at the heart of this once invincible, now vulnerable man. There is a hope and purity in Logan that doesn’t always show through his wisecracks, but it shines brightly and unexpectedly here – often in the film’s saddest moments.

There are a handful of things about the film don’t work quite so well. The main antagonists, played by Richard E. Grant and Boyd Holbrook, are largely forgettable – there’s not much that defines them outside their nefarious goals. As many viewers may be turned off by Logan’s relentless misery and eye-popping violence as those who welcome it.

But this doesn’t detract from the fact that Logan is a remarkable achievement. It manages to be several things at once: a bruising action film, a tender family drama and an intimate character study, liberally shaken through with comic-book sensibilities and a Western or two. If Jackman really is hanging up his claws for good, there could be no better way to bid farewell to one of Marvel’s most enduring and appealing characters.

Summary: A fine, fitting farewell to an iconic character, Logan is one of the best superhero movies ever made.