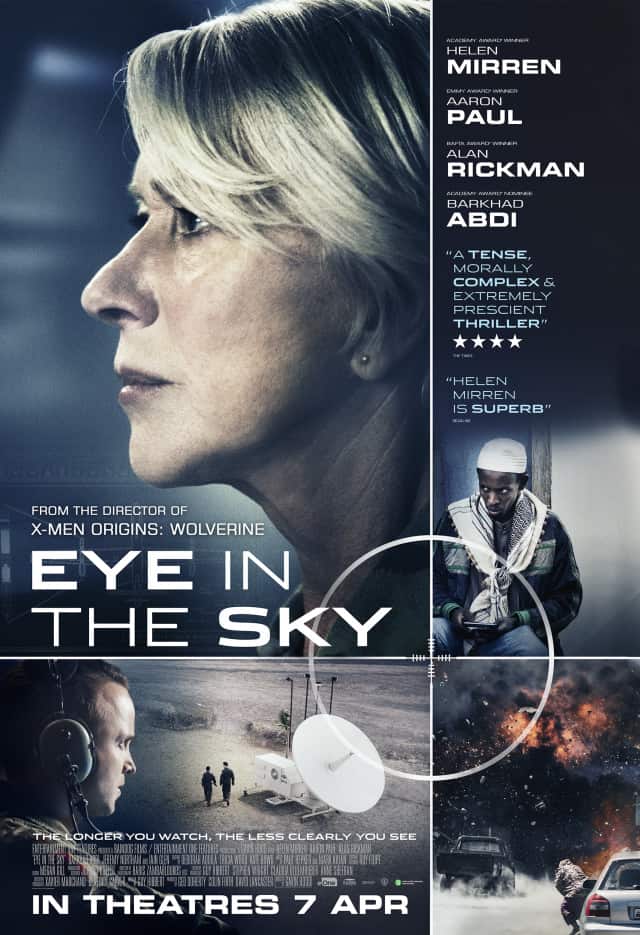 The use of unmanned aerial vehicles (UAVs) or drones in warfare has, to put it mildly, opened up quite the can of worms. This thriller delves into the myriad complications involved as UAVs are deployed high above the battlefield. British Colonel Katherine Powell (Mirren) is in charge of a secret mission to capture a group of wanted Al-Shabab terrorists in Nairobi, Kenya. Lieutenant General Frank Benson (Rickman) is keeping a close watch on the proceedings in the Cabinet Office Briefing Room A, or COBRA, at Whitehall. At Creech Air Force Base in Nevada, American drone pilot Steve Watts (Paul) has the responsibility of pulling the trigger. When a nine-year-old girl named Alia (Aisha Takow) enters the blast radius, it throws a spanner in the works, with Kenyan intelligence operative Jama Farah (Abdi) sent in to try and mitigate the situation. As the window to hit their high-value targets closes, Col. Powell and the others running the operation will have to make life or death judgements while taking the various consequences into consideration. 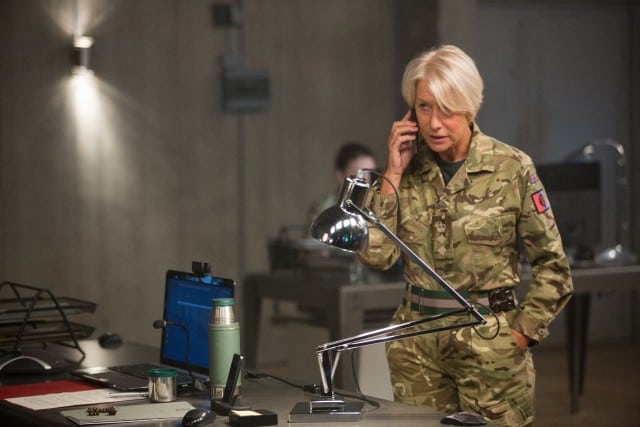 Movies about hot-button issues have the power to generate meaningful and thought-provoking conversations, at the risk of coming off as preachy, heavy-handed or ill-informed. The politics and the human cost of drone warfare are heavy subjects indeed, so it is to the credit of director Gavin Hood and writer Guy Hibbert that Eye in the Sky is taut and thrilling even as it delves into the relevant quandaries. Eye in the Sky unfolds in real time, with an unrelenting urgency sustained throughout its duration. The film unexpectedly steps into political satire, almost as if In the Loop has snuck into this tense thriller. The intentional yet uncomfortable moments of humour are derived from the lattice of red tape that has to be navigated as the decision to deploy the drones’ missiles or not is made. Instead of undercutting the tension, these instances add to the viewer’s frustration, further immersing us in the proceedings. The film effectively highlights how protocol is necessary yet can often stand in the way of things getting done. 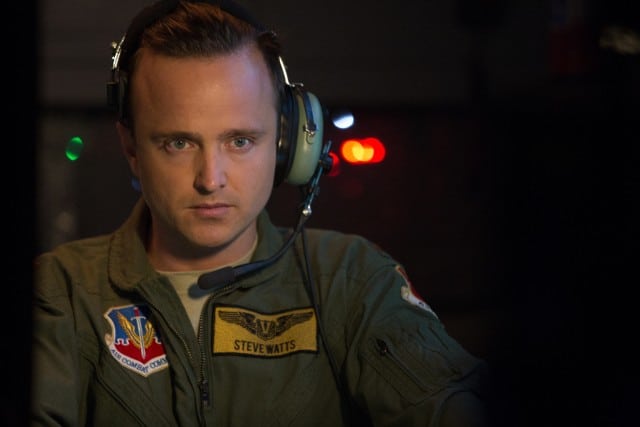 This is not a movie that calls for explosive theatrics, and most of the actors are seated or standing about in small rooms for the bulk of the film. In fact, Mirren, Rickman, Paul and Abdi did not even meet each other during production. Mirren effortlessly projects authority as Col. Powell, modulating her performance such that the character does not come off as a typical military hard-ass type. She eloquently puts across Powell’s thought process and when the character has to make tough calls, we understand she’s backed into a corner yet still question the validity of her judgement. Paul has an inner decency and earnestness which makes up for the fact that there’s not too much to the character. While the “conflicted drone pilot” might be on its way to becoming a cliché in and of itself, the way Paul’s Steve Watts attempts to reconcile his anguish and his obligation to duty is suitably compelling. 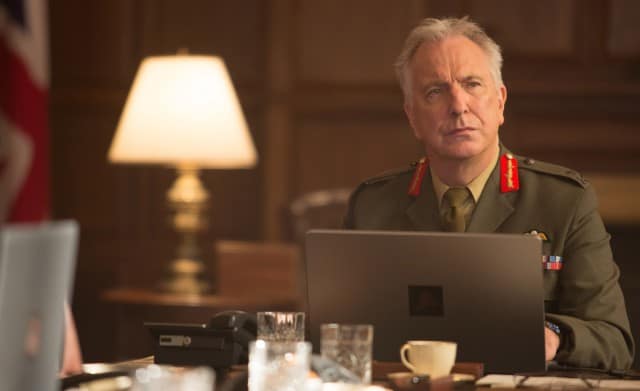 The late Rickman, in one of his final roles, reminds us why his passing is such a loss to film. As General Benson, Rickman is level-headed and focused, and the actor does so much with little more than a withering stare and that sonorous baritone. A scene in which he’s buying a doll for his granddaughter does come off as a too-obvious attempt at humanising the character. 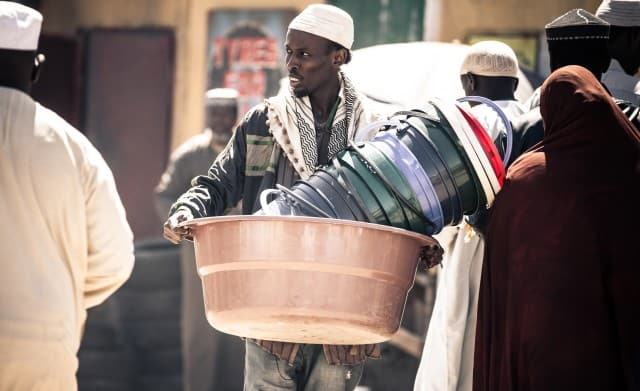 Abdi, best known for his Oscar-nominated role in Captain Phillips, is authentic as the resourceful man on the ground who is in charge of piloting a high-tech surveillance robot disguised as a beetle. The actor was struggling to get by even after his critically-acclaimed turn in that film, so one hopes more roles like that of Jama Farah find him. Iain Glen’s British Foreign Secretary James Willett, recovering from food poisoning while attending an arms manufacturing convention in Singapore, is the most Iannucci-esque the film gets and it does threaten to turn a little silly, but thankfully backs away from that cliff. 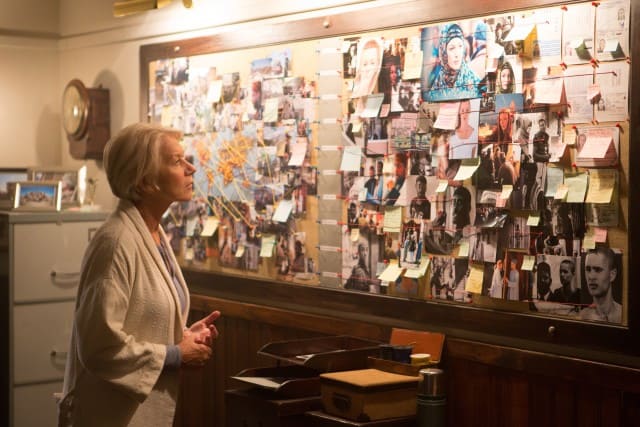 From the film’s opening, which shows Alia’s father ensuring she gets an education and gets to play even as their town is oppressed by religious fanatics, we know we’re in for a degree of emotional manipulation. However, director Hood (who also plays a supporting role as an American Air Force Colonel) displays considerable nuance and the film strives to send the message that there are no clean-cut “good options” in war, no matter how high-tech the arsenal gets. While the multiple settings of London, Nevada, Hawaii, Nairobi, Singapore and Beijing create a sense of scale, there are also points where it feels the story is stretched a little too thin. This Singaporean writer also couldn’t help but notice that the wrong type of traffic lights is seen out the window in the scene set in the Southeast Asian nation. Still, that’s but a small nit to pick in this engrossing and provocative but even-handed thriller.

Summary: Even as it poses heady, heavy questions regarding the ethics of drone warfare, Eye in the Sky does not get bogged down in politics and provides edge-of-your-seat entertainment in addition to food for thought.