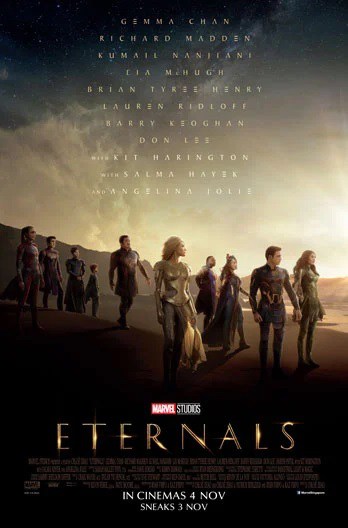 The Low-Down: It depends on how you count them, but it’s estimated that Marvel Comics’ collection of characters numbers over 7000. There’s no fear that the Marvel Cinematic Universe (MCU) might run out of characters, but there’s no guarantee that audiences will respond equally to every character that’s introduced. Hoping for a repeat of the reaction to the Guardians of the Galaxy, the MCU introduces a new set of cosmic characters with Eternals.

The Story: 7000 years ago, Arishem (David Kaye) of the Celestials sent a team of seemingly immortal warriors known as the Eternals on a mission to earth. The Eternals comprise Ajak (Salma Hayek), Sersi (Gemma Chan), Ikaris (Richard Madden), Kingo (Kumail Nanjiani), Sprite (Lia McHugh), Phastos (Brian Tyree Henry), Makkari (Lauren Ridloff), Gilgamesh (Don Lee), Thena (Angelina Jolie) and Druig (Barry Keoghan). Each member of the team possesses different powers, which they use to battle the Deviants, a monstrous, hostile alien species which has attacked earth. The Eternals thought they had defeated the last of the Deviants 500 years ago, but the monsters rear their heads yet again. Having lived apart for centuries, the Eternals must reunite to face the threat, but along the way, they will also learn of a far-reaching, possibly world-ending conspiracy that they are unwittingly a part of.

The Good: This writer gravitates towards stories with chronological scope. The idea of beings who live forever grappling with the blessing and curse of immortality is something inherently compelling, and Eternals explores this with a fair amount of nuance. It’s a story about gods learning to become men, and it delves into the messiness of humanity in a way one might not expect from an MCU movie. There is a sweeping scale to the film, which deliberately doesn’t feel like it was entirely shot against greenscreen on a soundstage. Director Chloé Zhao has a knack for capturing vast landscapes, and location filming on the Spanish Canary Islands of Fuerteventura and Lanzarote and various places in England lend the movie a tactility that these big, visual effects-driven spectacle movies sometimes lack. From the Hanging Gardens of Babylon to the fall of Tenochtitlan, there’s an impressive if sometimes overwhelming breadth to the proceedings. 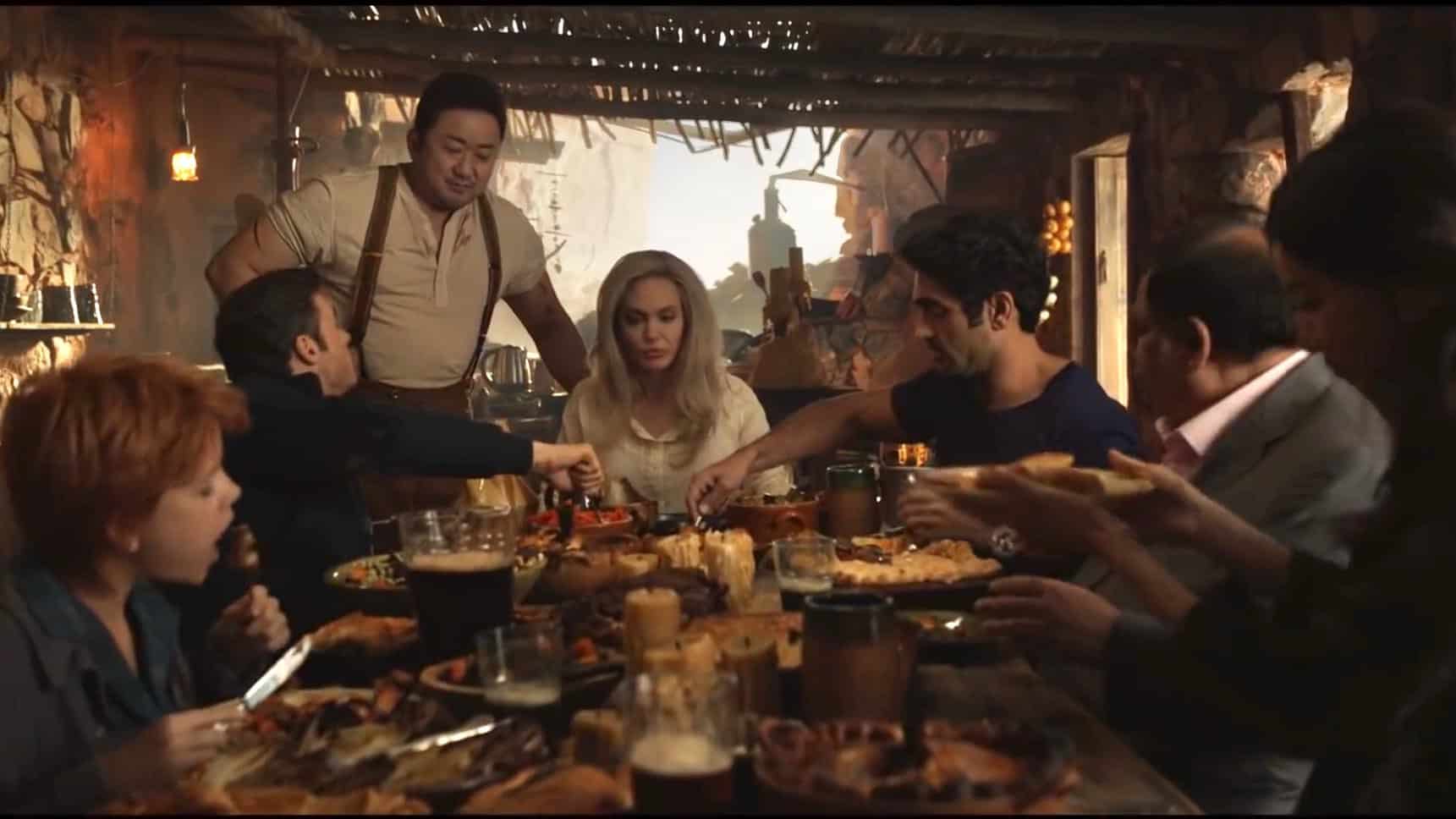 While the sprawling 156-minute runtime might feel intimidating and while the movie does suffer from some pacing issues, it also means there’s a lot of space for the characters to just interact with each other. It doesn’t feel like a breathless race from set-piece to set-piece, which might be what some filmgoers want, but the movie feels comfortable being what it is. There is a warmth here which offsets the coldness often associated with sci-fi. Like other indie/prestige filmmakers who have entered the MCU fold before her, it feels like Zhao was rendered ample production/technical support by the Marvel Studios machine, but also got to put just enough of her own stamp on the movie.

The Not-So-Good: As with any space opera, Eternals is unwieldy, perhaps past the amount which is unavoidable for the subgenre. There are lots of proper nouns, and reams of exposition to get through. For certain viewers, this might feel like the point where they want to tap out of the MCU. It’s not the most flattering comparison, but it sometimes feels like a more restrained, serious-minded Jupiter Ascending. It seems like comic book readers might be better equipped to go along for the ride, and indeed, comics writers and artists are generally responding better to this film than mainstream critics. There’s a lot going on, and not all of it makes sense, and the degree to which one is willing to surrender to the movie will vary.

While Eternals is sometimes visually impressive thanks to its practical locations, there are times when it looks a bit dour. The Eternals were created by legendary comic book artist and writer Jack Kirby, but the signature dynamic Kirby visual sensibility is largely lacking from the film (the MCU movie that most reflects this aesthetic is Thor: Ragnarok). The character designs feel somewhat uninspired, and the Deviants just do not look good, coming off as disposable CGI alien beasts. Director Zhao’s interest doesn’t seem to lie in the action set-pieces, so they sometimes feel perfunctory, even though they can also be exciting. As if there weren’t already enough plot and characters to deal with, the movie also adds Kit Harington as Dane Whitman, who Marvel readers will know as the Black Knight. There’s a certain amount of teasing coming attractions that we’re used to from these movies by now, but Eternals doesn’t seem to support that in addition to everything else. 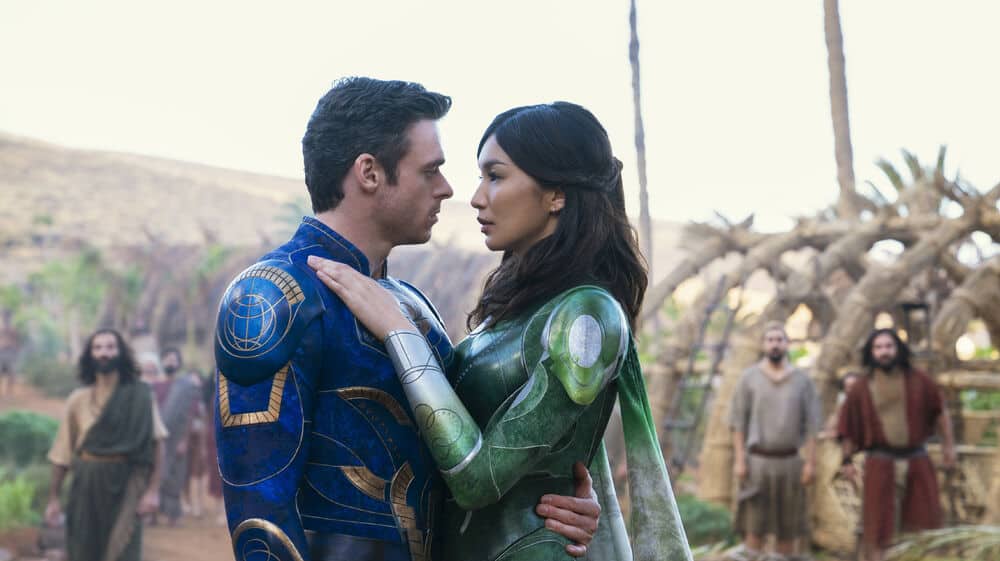 Who wants to live forever? The main cast consists of ten characters, which seems too many by half. Even then, this is an eclectic cast. While several may not get enough time to shine, the interplay between them is where the heart of the movie lies, and Zhao seems insistent on giving the characters humanity. Gemma Chan is first billed, but Sersi isn’t the most interesting character of the bunch, as often happens with the leads in ensembles. Richard Madden looks the part of a Superman type, while Kumail Nanjiani has charisma to spare as the superhero-turned-Bollywood-star (with Harish Patel stealing the show as Kingo’s loyal manager/valet Karun). Lia McHugh’s Sprite feels she is cursed to live forever in the physical form of a child, which is a fascinating and tragic notion. 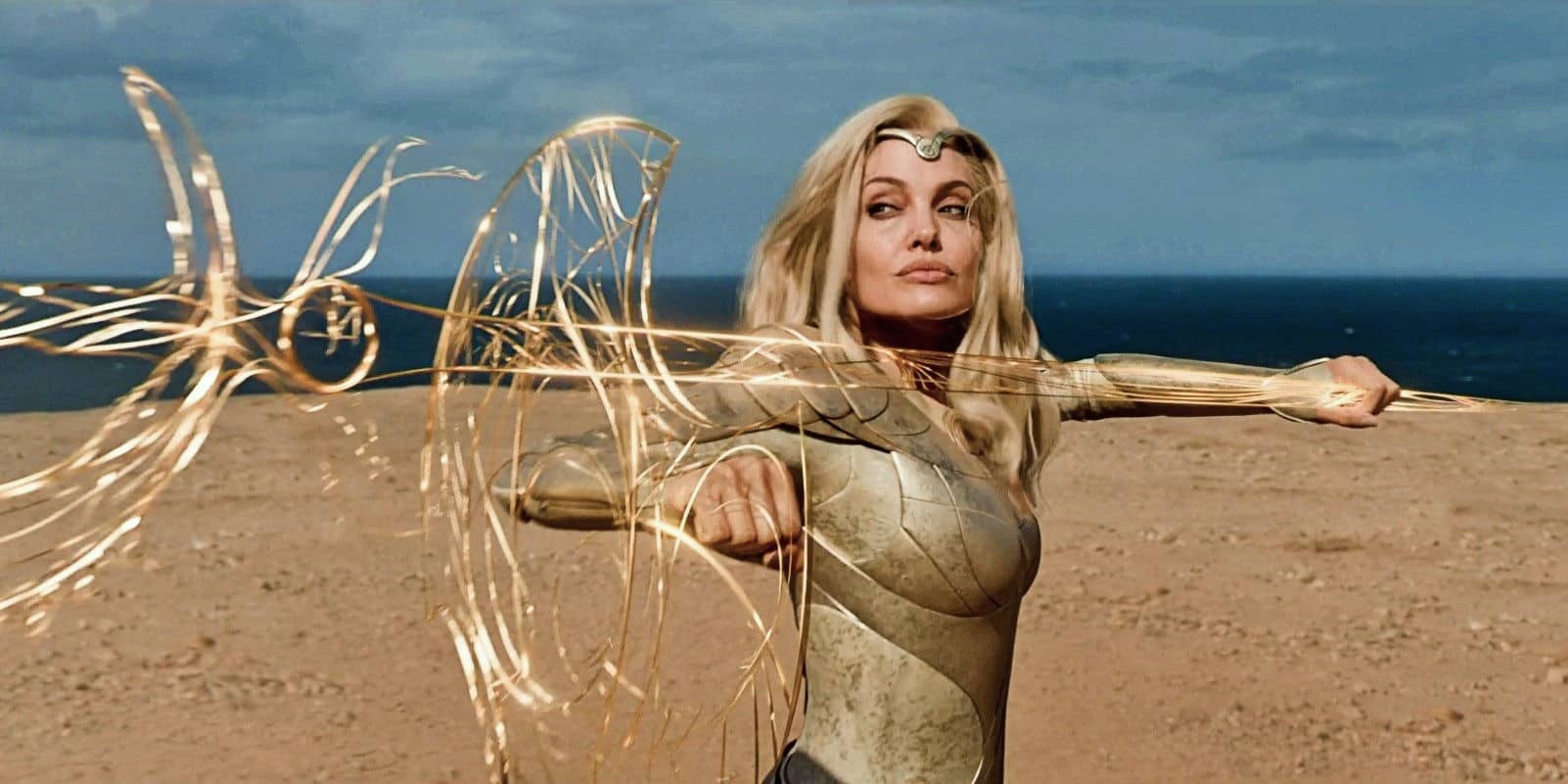 Whenever Angelina Jolie shows up on screen, one is wont to go “now there’s a movie star”. It’s been said that these days, it’s franchises like the MCU that are the movie stars, so it’s always nice to see a bona fide movie star in an MCU entry. Much has been made of the movie’s representation, with it featuring a gay character in Phastos and the first deaf superhero played by a deaf actor in Makkari. Imbuing godlike characters with human traits to make them relatable is something that has been done since the beginning of storytelling, so while some might be bothered by this and react with hostility to it, this reviewer never found any of it feeling forced.

Recommended? Yes, with the caveat that this is far from the most accessible MCU movie.