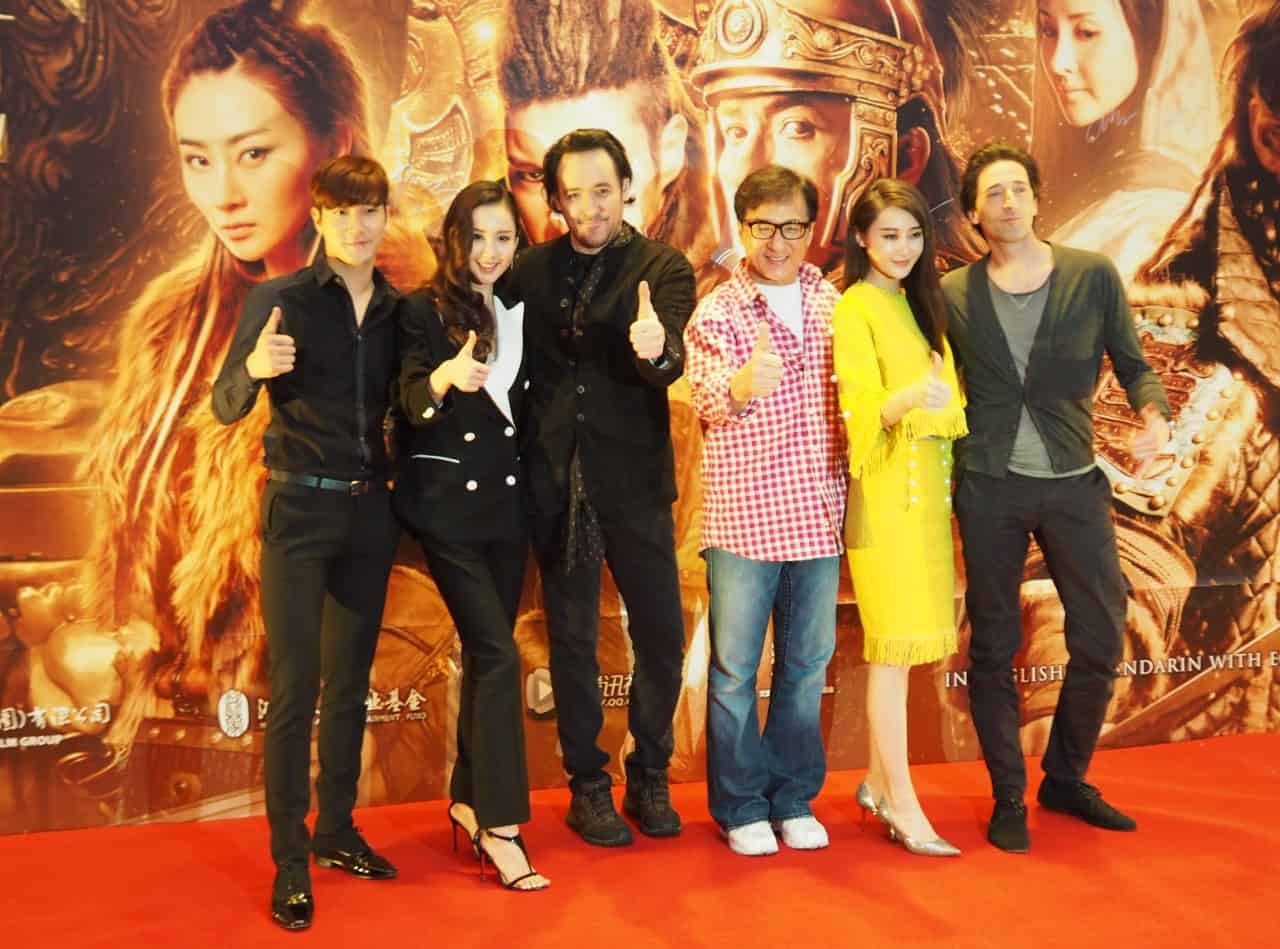 It is a Tuesday morning and F*** is at the Pan Pacific Hotel Singapore as Jackie Chan, John Cusack, Adrien Brody, Choi Siwon, Lin Peng and Mika Wang enter the ballroom for the press conference. Surely one of the most eclectic casts ever assembled, it’s not every day that an Asian action star sits alongside an Oscar winner and a K-pop singer to field questions from reporters. 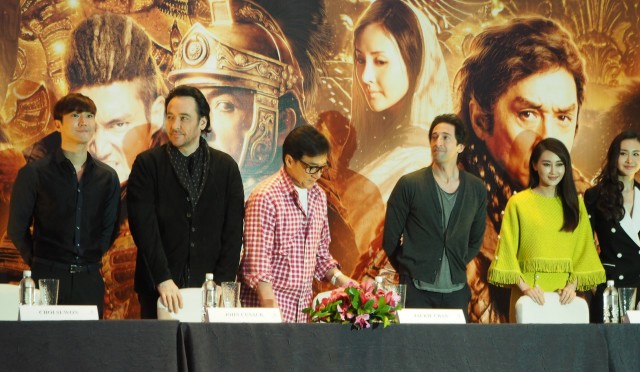 Photographers go into frenzy, jostling each other as they crowd around the stage to snap a shot of the actors. “Please, sit down. Let’s have some order, thank you,” Jackie exhorts in Mandarin. They obey. “Ah, now, much, much better!” he says, satisfied. Used to wearing many hats, Jackie is the producer, star and action director on Dragon Blade. Jackie plays the protagonist Huo An, a general of the Silk Road Protection Squad who is framed for treason and forced to work in a slave labour camp on the outskirts of China. He explains that he spent seven years preparing the film, which was filmed in the harsh climes of the Gobi Desert. Jackie rattles off some staggering figures: 350 crew members, 800 extras and 200 horses were required to pull the movie off. “It doesn’t matter how difficult the filming process was, if the audience enjoys the film, all the sweat, blood and tears are worth it,” he says.

The involvement of Hollywood actors Cusack and Brody is unprecedented in the history of Chinese cinema. For both of them, it was a thrill to participate in a martial arts movie, seeing as they grew up on classic Golden Harvest Hong Kong movies. “We were great Jackie Chan fans, Bruce Lee fans, and saw all the martial arts movies so to be able to work with Jackie as an actor but also a visionary choreographer of actions and stunts, all the standards he puts in his movies, it was quite a thrill,” Cusack says. He portrays Lucius, a Roman general in exile who meets Jackie Chan’s character Huo An in the desert. Though initially wary of each other, Lucius and Huo An put aside their differences to concentrate on rebuilding the outpost of Wild Geese Gate. 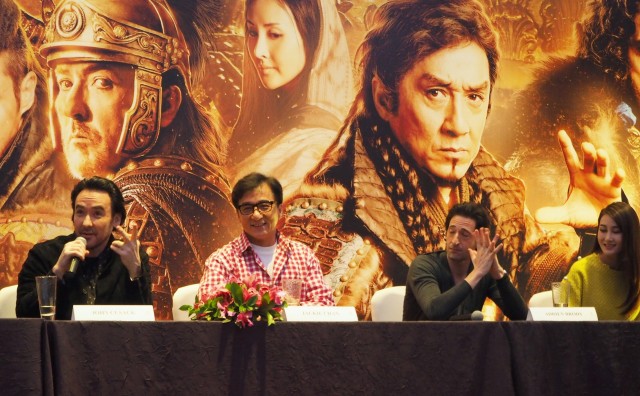 Brody agrees, saying “this is my childhood and adolescent fantasy, not only do we get to collaborate in a deeper dramatic capacity, in a creative way, but in a martial arts sense, it is such a thrill, it is beyond a thrill to learn from Jackie and to be able to play together, it was really very exciting.” Brody plays the villain of the piece, the tyrannical, power-hungry Tiberius, who has pursued Lucius across the desert.

Jackie says that having worked in movies for 54 years, he has gotten used to the pressure of making a movie and that he believes that the old ways are often the best. “These days, audiences enjoy films like the Transformers movies and Spider-Man, as well as wire-fu action movies,” he says, saying he is adamant about retaining traditional ways of performing stunts, which he jokingly calls “stupid methods”. “Today, in Hollywood movies, there would be a piece of green cloth wrapped around the sword so it would look like the sword is slicing in real close without hurting anybody. Our method is really stupid – we did it for real. I feel that it’s a miracle that I can still be making action films at my age.” Jackie reveals that Cusack hit him twice in the hand by accident while filming a sword fight scene. 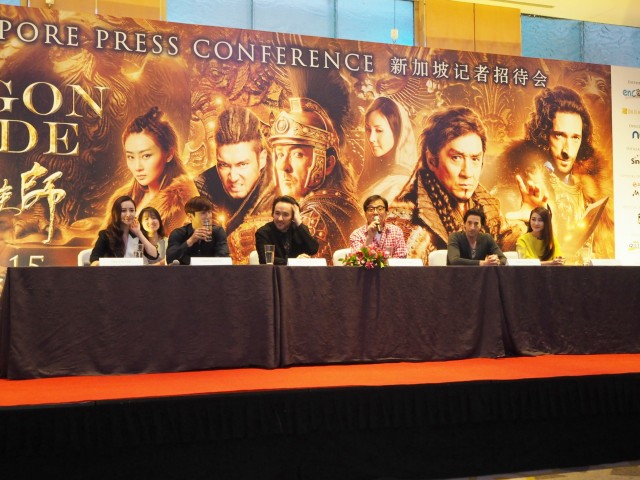 “Well, we had a very long fight in the middle of the desert and sooner or later, you hit each other!” Cusack says sheepishly. Cusack and Brody were able to offer their input on the English segments of the script to ensure the dialogue sounded natural.

Jackie may not feel the pressure, but actress Lin Peng certainly does. “Working with this director and cast, the pressure was immense. In this film, I’m playing a fierce warrior woman, so it was very demanding in terms of the martial arts. Jackie has very high standards for martial arts, so the pressure was on,” she says. 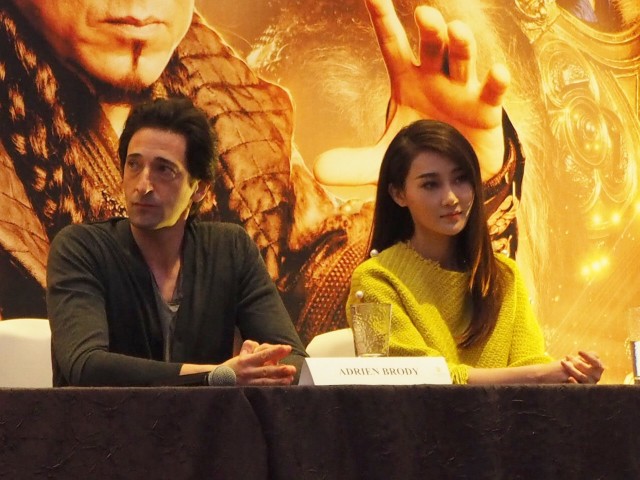 Lin Peng has a scene where she is seen nude from behind. Jackie explains that he gave her the option of using a body double, but the actress decided to go the full Monty for real. Emphasising that he didn’t intend on leering at her, Jackie says “only I could see her naked body, but I assured her, ‘I’m not a pervert, I’m not looking at you in a sexual manner’.”

When Lin suggests that this is probably the most challenging entry in Jackie Chan’s recent filmography, Jackie admonishes her, saying all his movies are challenging to make. “Every film I make is challenging, it’s just that you don’t know it,” he counters. He elaborates on coordinating the casting of all the extras, including the actors playing Roman soldiers and the multi-ethnic schoolchildren. “They would say ‘it’s because of you, Jackie, that we’re here’. We had to teach them all the basics of acting. We needed to take care of these extras and create a friendly atmosphere for them. I’d make sure to eat with them and chat with them, because I didn’t want their first experience on the set of a Chinese film to be a negative one,” he says. 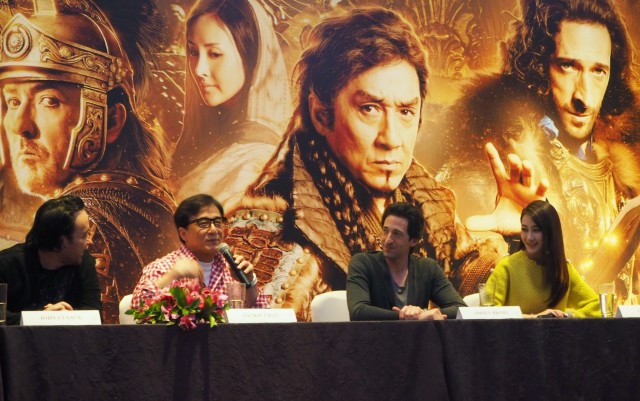 Jackie emphasises that no matter how physically strenuous the shoot was for the actors, the crew had it worse. “I always say, actors have to be considerate of and grateful to all the crew members on set. Actors have it the easiest! They come to set late and leave early. Anywhere I go, I say the crew has it the hardest and we all have to recognise the contributions of those working behind the scenes.”

Relative newcomer Mika Wang plays the other lead female character, a schoolteacher who is married to Huo An. “This is my first time working with Jackie and I feel very lucky to have the opportunity. Jackie has taught us so much, both in terms of filmmaking and in life,” she says. When she describes the finished movie as “awesome”, Jackie interjects with a rebuke again. 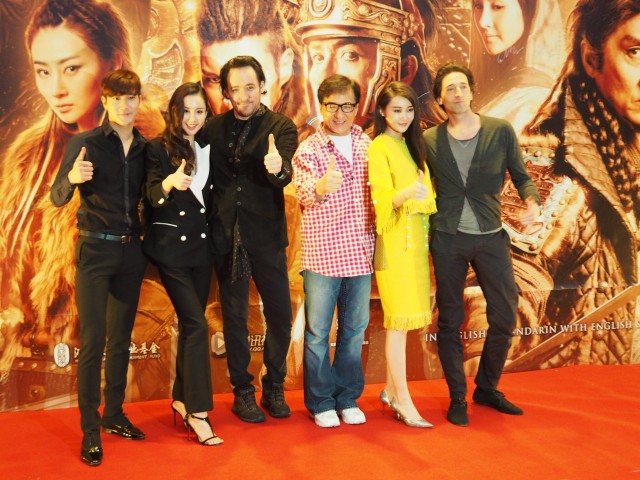 “Never call your own movies ‘awesome’.” Jackie says in a finger-wagging tone. “Say they’re ‘okay’. You have to be humble always, that’s what I’ve taught you!”

K-pop star Choi Siwon of Super Junior fame plays Huo An’s right-hand man in the film, Yin Po. Jackie had requested that he be cast in the film after positive experiences working on charity shows with the singer, who is hugely popular across Asia. Most of the fans at the mall appearance and red carpet premiere later that night are there for Choi Siwon alone. Choi likens learning fight choreography to learning dancing, and hopes he will get to showcase his moves by actually dancing in a future film project. “I love Singapore”, he says at one point. 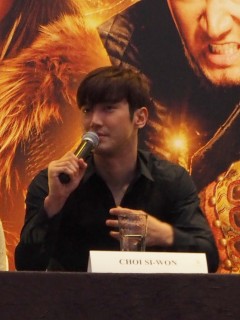 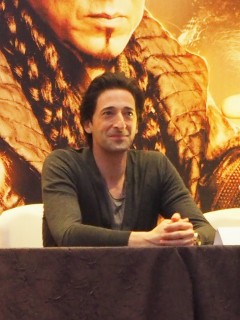 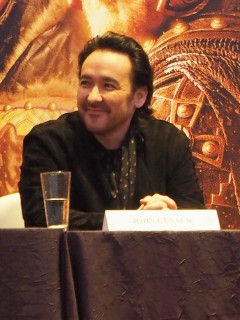 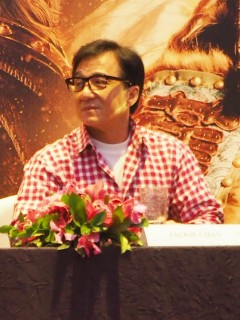 East-meets-west films haven’t exactly had a sterling track record – 47 Ronin, anybody? On what gives Dragon Blade its, well, edge in this subgenre, Cusack says it’s that “the quality control standards of Jackie and [director] Daniel Lee are incredibly high so this a very top-of-the-line movie.” He states that the production value was on par with that of the Hollywood blockbuster 2012, which “played here in China.” Perhaps he’s just a little jet-lagged, we’ll forgive the one-off geo-confusion – after all, Singaporeans are pretty used to having their country mistakenly thought of as a part of China.

Jackie has lofty ambitions for this film and is particularly enamoured with its message. He says the one phrase that jumped out at him in the screenplay for Dragon Blade was “live for peace, turn foes into friends”. “Today’s world is in such dire need of peace that I felt I had to make this movie,” Jackie proclaims. “I felt that I had a mission with this film. With Chinese Zodiac, it was about the conservation of antiques. In Dragon Blade, it’s all about peace. I think everyone must have a sense of responsibility to create peace. My hope is that everyone can watch this movie and be touched by its message – Al Qaeda, the Middle East, the United States, my hope is that everyone can watch this movie and learn the value of peace.” Terrorists being compelled to put down their arms after watching a Jackie Chan film? You never know.