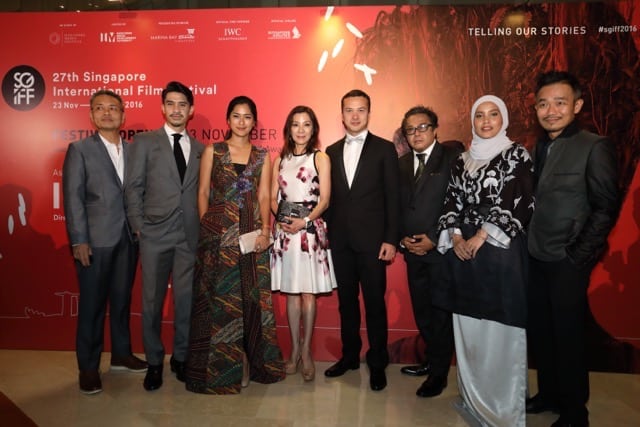 On the night of 23rd November, the 27th Singapore International Film Festival (SGIFF) kicked off with a gala opening. The opening film was Dain Iskandar Said’s Indonesian urban fantasy neo-noir Interchange, with Gladys Ng’s short film The Pursuit of a Happy Human Life screened alongside it. F*** was at the Mastercard Theatres in Marina Bay Sands as the attendees graced the red carpet.

The guest-of-honour was actress Michelle Yeoh, who was the recipient of the Cinema Legend award at last year’s edition of SGIFF. Earlier today, it was announced that Yeoh had joined the cast of CBS’ series Star Trek: Discovery. SGIFF chairman Mike Wiluan was there with his wife Laurie. George Tanasijevich, President and CEO of Marina Bay Sands and Gabriel Lim, CEO of Info-communications Media Development Authority of Singapore (IMDA) joined Yeoh on the red carpet.

27th SGIFF: In Conversation & On The Red Carpet With The Cast & Crew Of ‘MRS K’