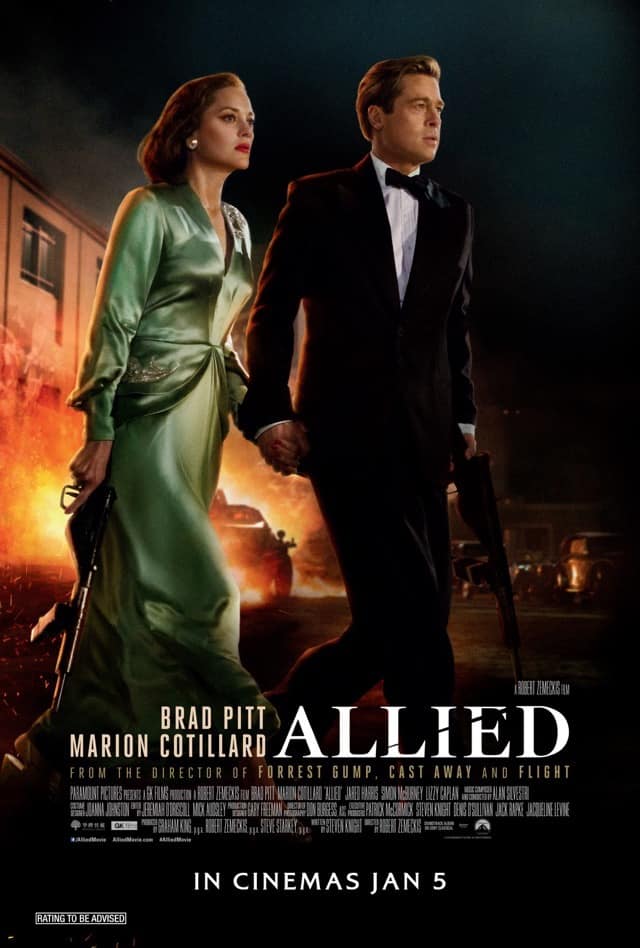 Brad Pitt is playing spy games again, and this time his partner is the slightest bit more fetching than Robert Redford. It is 1942 at the height of the Second World War, and Max Vatan (Pitt), a Royal Canadian Air Force intelligence officer, is dispatched to French Morocco. He is partnered with Marianne Beauséjour (Cotillard), a beguiling French Resistance fighter who is the lone survivor after the members of her resistance group were compromised and killed. Their mission is to assassinate the German ambassador Hobar (August Diehl) at a party in Casablanca. Against their better judgement, Max and Marianne fall in love with each other, eventually marrying and having a daughter. Just as he is growing accustomed to their new idyllic existence, Max winds up facing the possibility that there might be more to Marianne than meets the eye.

Director Robert Zemeckis, whose credits include such influential films as Back to the Future, Who Framed Roger Rabbit? and Forrest Gump, has assembled a resolutely old-fashioned film with Allied. This is a throwback to the wartime romantic thrillers of days gone by, but with considerably more swearing, sex and violence (in that order) than the Hays Code would’ve allowed. In invoking classics like Casablanca by setting its first half in, well, Casablanca itself, Allied has its charms. However, despite the afore-mentioned adult content, Allied comes off feeling sanitized. Zemeckis and screenwriter Steven Knight seem to be going for the romanticised movie ideal of World War II over an authentic portrayal of the setting. The inadvertently makes Allied reminiscent of the Indiana Jones films, even though the tone here is markedly more serious.

Zemeckis stages several suspenseful scenes with a master’s touch, and the moments in which Max and Marianne practice their spycraft are fun to watch. In hewing so close to established tropes and styles, Allied often teeters on the edge of cheesiness. For example, Max and Marianne share a steamy moment in the front seat of their car as a sandstorm rages outside, the camera lovingly swirling around them. It’s beautiful in its own way, yet ridiculous and snicker-inducing at the same time. Much of the film is like that, though it’s most obvious during the tryst-in-a-car-in-a-sandstorm.

It’s a safe estimate that Pitt and/or Cotillard are in around 95% of the shots in Allied, with the supporting cast dwarfed by the leading stars. There was some salacious, sensationalist gossip that emerged at the time of the Brangelina divorce announcement, that Angelina Jolie had suspected Cotillard of coming on to Pitt while making this film. As such, it’s a bit of a shame that the pair share altogether too little chemistry. The earlier scenes in which the pair shares playful banter, which Marianne coaching Max on his Parisian accent, promise an explosive, passionate romance to remember. Alas, that is not the case.

Pitt spends most of the film looking morose, and Max Vatan emerges as a largely uninteresting character. Max is sometimes too credulous to be an elite spy, even with romance clouding his judgement factored in. Pitt is by no means a terrible performer, but Cotillard acts rings around him and is significantly more magnetic a presence. She’s sultry and slinky, but always more than a mere caricature of a femme fatale.

The stars and the costumes they wear are pretty to look at, but Allied provides little more than that. Thanks to Zemeckis’ years of experience, it is competently assembled and there are no egregious missteps along the way, but neither the thrills nor the romance have the visceral impact the story needs to be truly affecting.

Summary: Allied’s megawatt star pairing should have yielded more excitement than this, but Robert Zemeckis’ direction saves this old-timey wartime romance from being a completely staid experience.