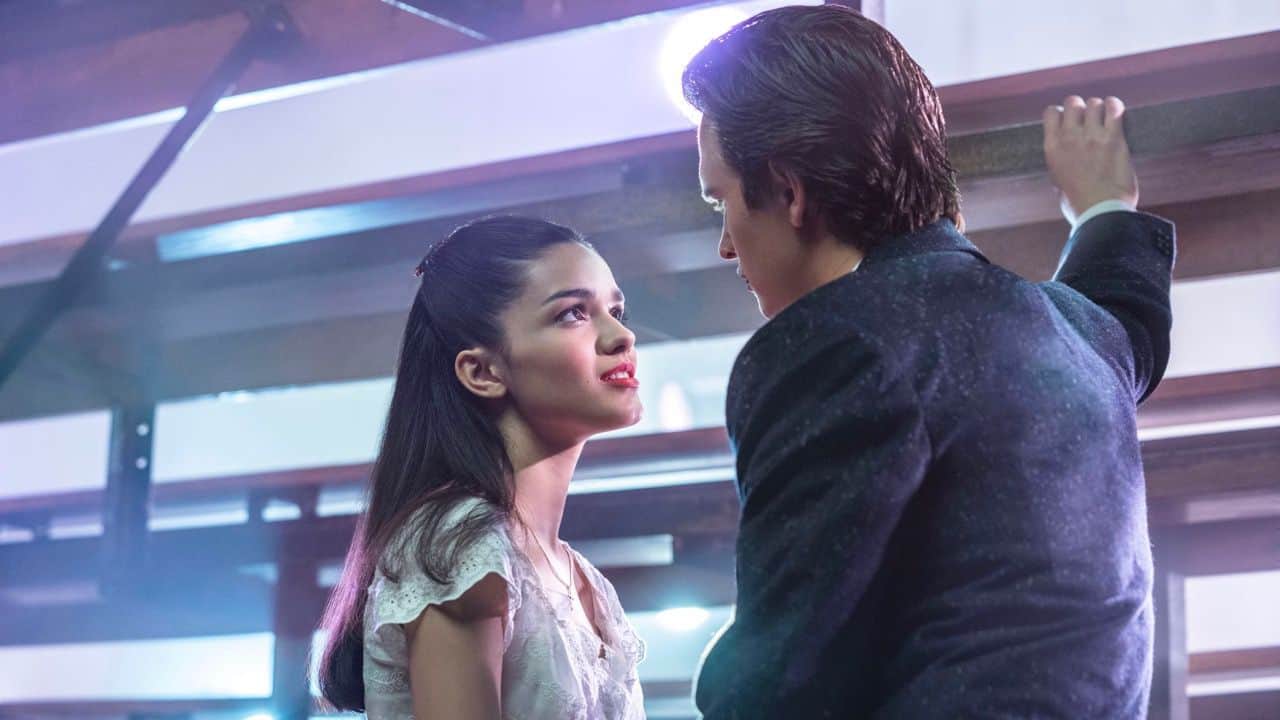 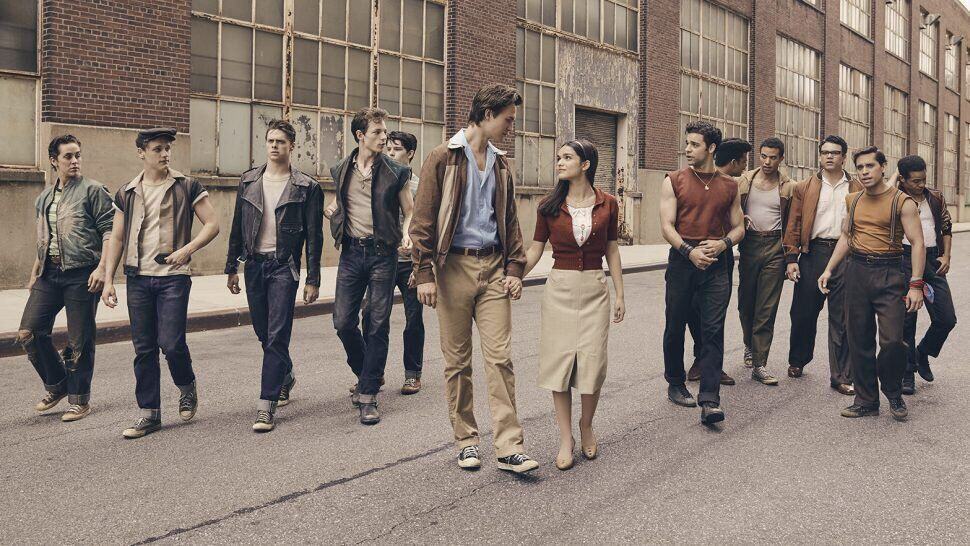 The Story: It is 1957 in Manhattan’s West Side. A turf war is raging between the white gang the Jets and the Puerto Rican gang the Sharks, both vying for control of San Juan Hill. Riff (Mike Faist), the leader of the Jets, and Bernardo (David Alvarez), the leader of the Sharks, are planning a big face-off between the two gangs. Riff promises that Tony (Ansel Elgort), the co-founder of the Jets who was recently released from prison, will be there. At a dance, Tony and María (Rachel Zegler) catch each other’s eye. María is Bernardo’s sister, and lives with Bernardo and his girlfriend Anita (Ariana DeBose). A potential romance between Tony and Maria will send the already-high tensions soaring. The stage is set for a tale of crime, community and forbidden love. 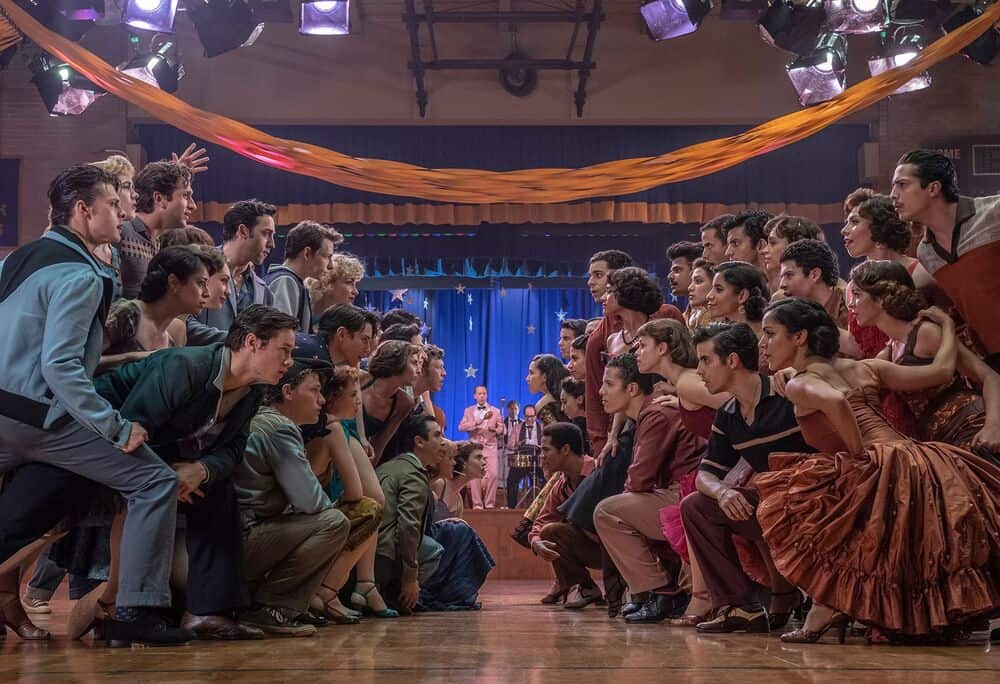 The Good: When it was announced that Spielberg would be directing a new adaptation of West Side Story, the common response was “why?” The answer is “because he’s Steven Spielberg and can do whatever he wants.” Beyond that, this adaptation justifies its existence, building upon the stage show and the earlier movie with an obvious affection for the source material, but also a sincere desire to dig deeper. Playwright Tony Kushner, who collaborated with Spielberg on Munich and Lincoln, set out to contextualise the setting of the story.

The themes of gentrification, the prejudice faced by immigrant communities and the underlying factors that lead to violent crime were all inherent in the source material, but one could argue they weren’t handled with much nuance. This West Side Story is a triumph of style and substance, a handsomely filmed and designed movie showcasing some of regular Spielberg cinematographer Janusz Kaminski’s finest work. It looks and sounds incredible, with the story rendered urgent and compelling. West Side Story is a cultural touchstone, often referenced and parodied, so the danger of approaching it afresh is that there’s going to be baggage. Spielberg and Kushner deftly navigate this, presenting something that feels at once fresh and classic. 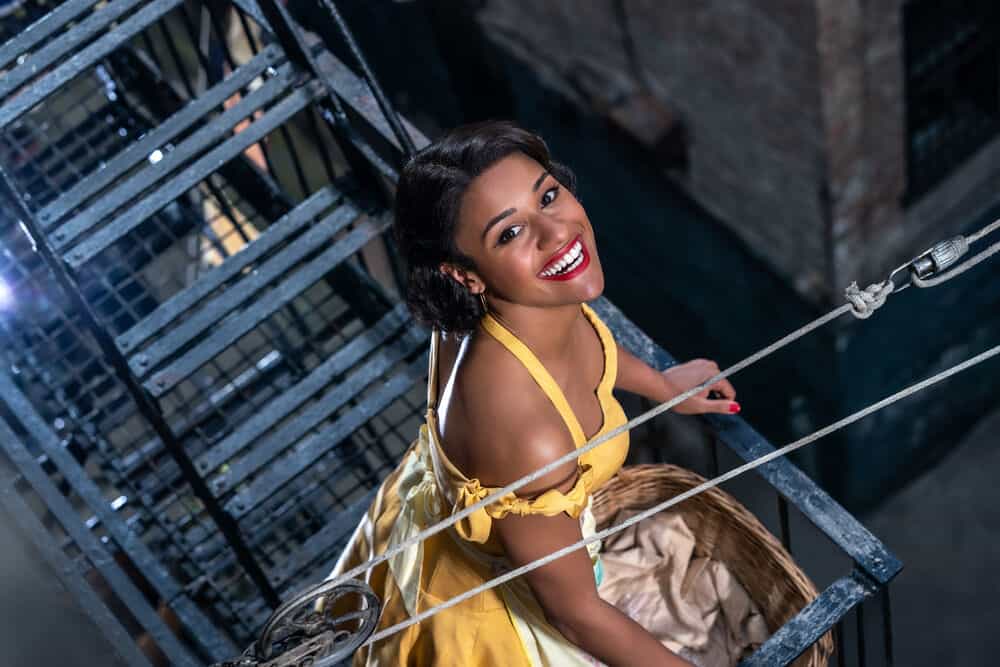 The Not-So-Good: West Side Story has often been criticised by Puerto Rican people for its stereotypical portrayal of Puerto Rican characters. The original creative team was, after all, entirely comprised of people who did not have the first-hand experience that would have made the story more authentic. There are pains taken here to paint in strokes that aren’t quite so broad, with Puerto Rican writer, director and choreographer (and protégé of Jerome Robbins) Julio Monge on board as a consultant. However, there still are Puerto Rican people who feel West Side Story is beyond salvaging, and this reviewer has no place to argue with their interpretation. For all its strengths, the movie also highlights the need for people from varied backgrounds to tell their own stories on platforms they have historically had limited access to. 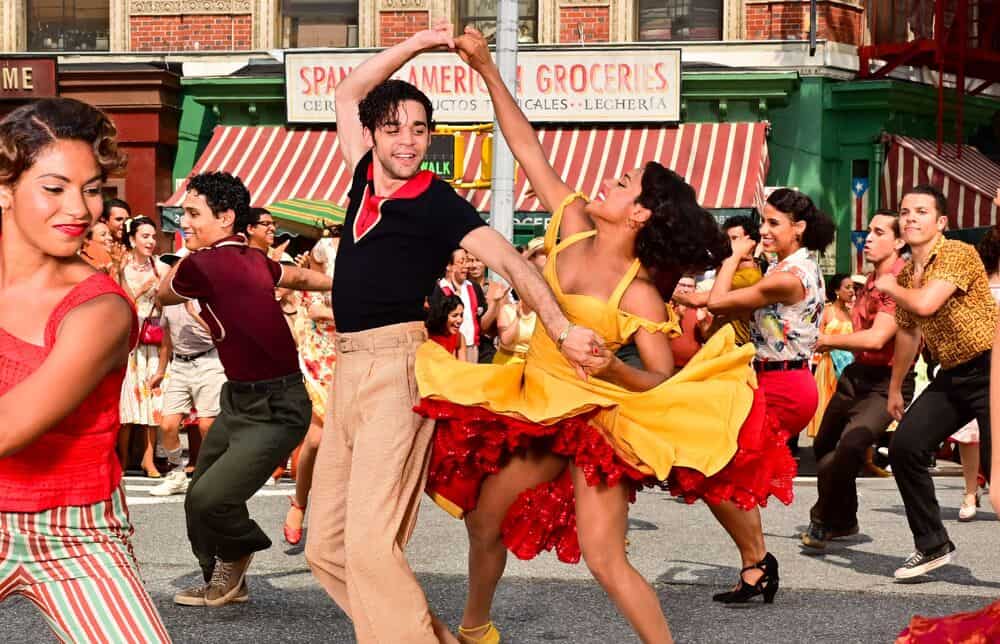 Jets, Sharks and everyone in between: There isn’t really any stunt casting going on here, which is one of the pitfalls of movie musicals. The star is Spielberg. Most of the key roles are filled by actors with considerable musical theatre experience. Former Newsie Mike Faist and former Billy Elliot David Alvarez, both strong dancers, are wonderful foils for each other. Ariana DeBose is a powerhouse and commands the screen. 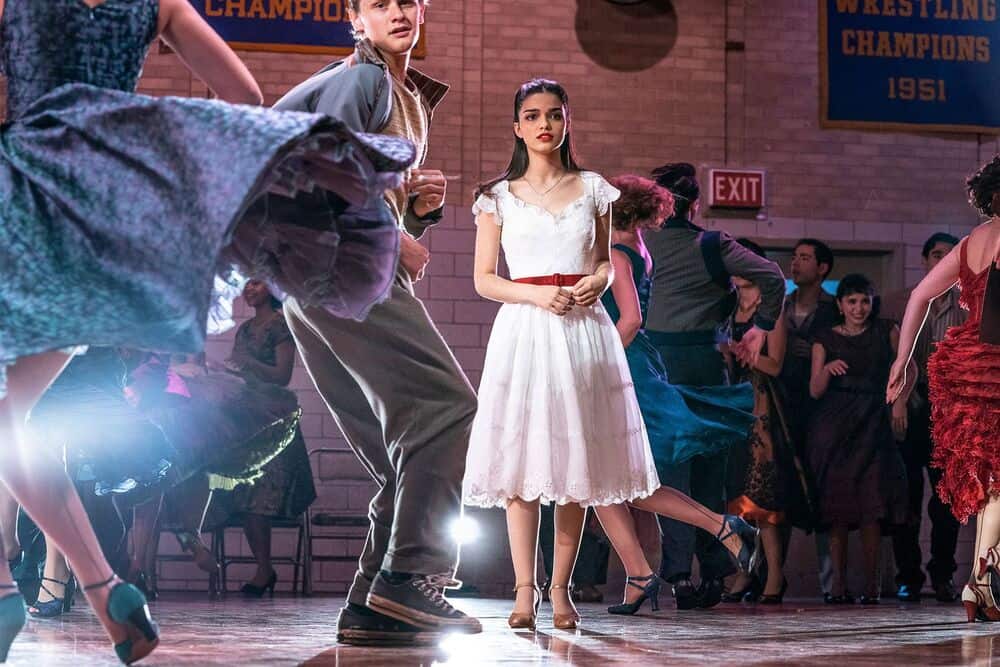 Rachel Zegler is a revelation, radiant, endearing and possessing incredible vocal control. This is a rare, miraculous instant movie star-type performance. She already has roles in Shazam: Fury of the Gods and Disney’s Snow White remake lined up. 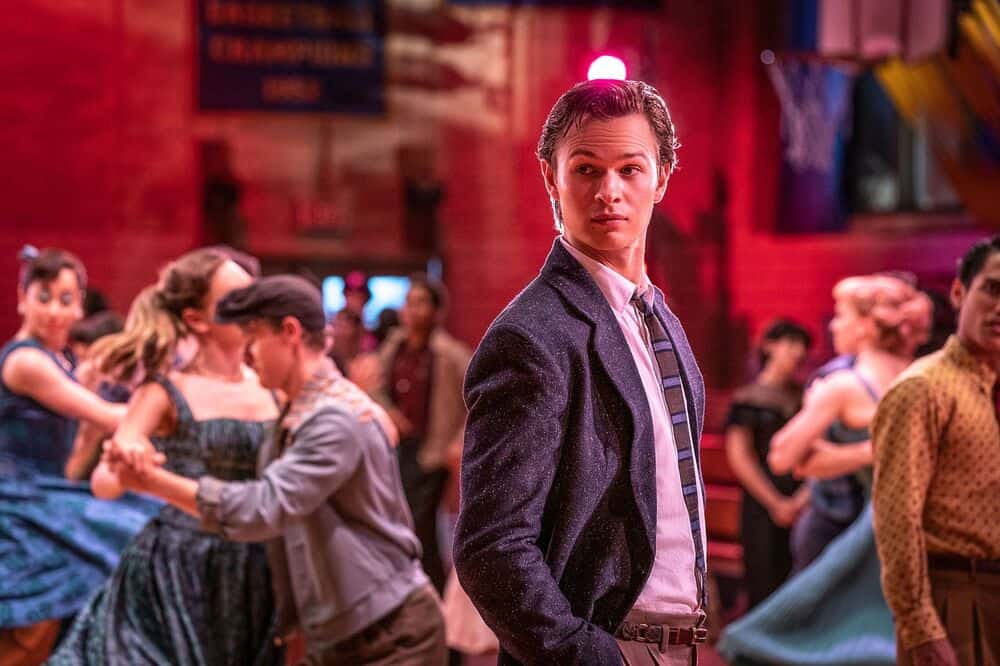 Unfortunately, the one big misstep here is the casting of Ansel Elgort. He is not a bad singer, having obviously put effort into trying to keep up with his much more musically experienced co-stars, but once he’s in a duet with Zegler, it’s all over. She runs rings around him, and this is on top of how Tony was always kinda boring to begin with. 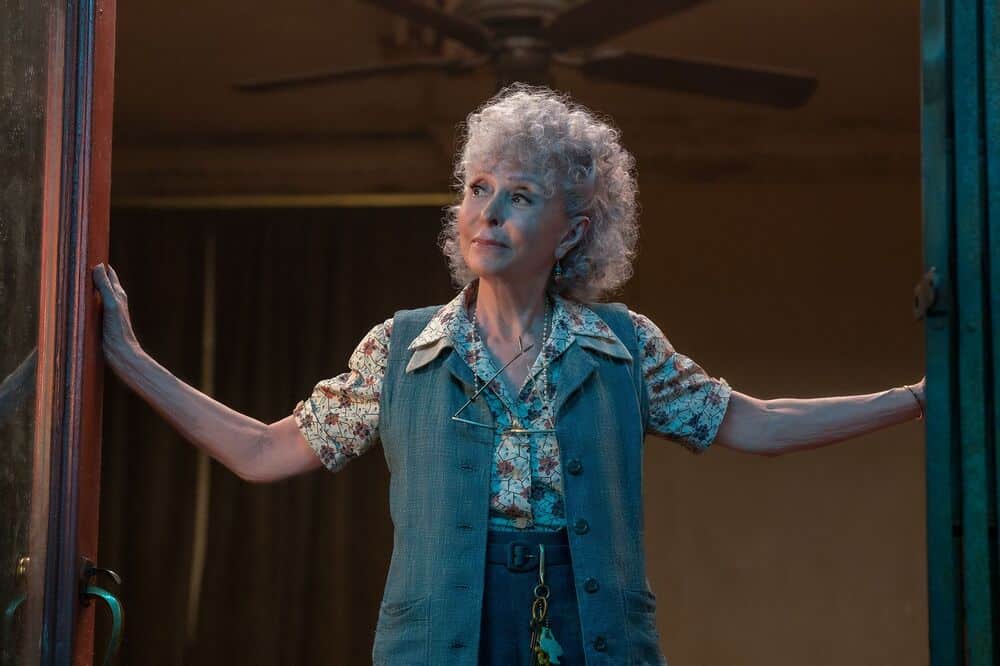 Rita Moreno is one of the highlights of the film. The actress portrayed Anita in the 1961 film, and here, plays Valentina, a modified version of the Doc character who looks out for Tony. She sings “Somewhere” in one of the film’s most powerful moments. 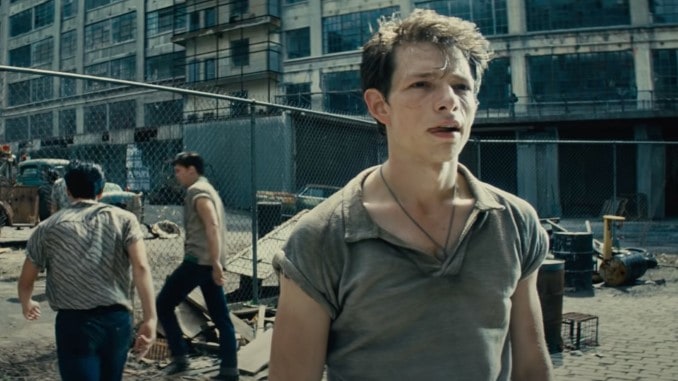 Say it loud and there’s music playing: One would think that getting the music right would be a priority for any movie musical, and yet, movies like 2012’s Les Misérables and 2019’s Cats have shown how things can go horribly awry. West Side Story is serious about its music – after all, the songs by Bernstein and Sondheim, including standards like “Tonight” and “Maria,” are evergreen and beloved. The musical arrangement by David Newman is both majestic and nimble, with composer/arranger Jeanine Tesori working with the actors on their vocals. The score is recorded by the New York Philharmonic with additional material by the L.A. Philharmonic, conducted by Gustavo Dudamel. The sound editing and mixing shows the music off in all its glory, with the performers delivering some of the best-sounding singing in a movie musical in recent memory.

Recommended? Yes. It was a risk to reinterpret something as beloved and influential as West Side Story, but in Steven Spielberg’s hands, it is one of the finest films of the year.