The fluctuating quality of the X-Men series makes First Class even more of a pleasant surprise. Is this the best superhero film ever? Nolan fans might disagree, but Matthew Vaughn may have just achieved that. That`s how good it is.

Fans of the comic must accept that many liberties have been taken with the characters, and there are even some continuity issues with the other four films. In this entry The Hellfire Club, a group led by the powerful Sebastian Shaw, wants to start a war between the United States and the Soviet Union, hoping the radiation will accelerate human evolution. On the other side stands a young and idealistic Charles Xavier, who teams up with the FBI and recruits another group of mutants, including one with a thirst for revenge Erik Lehnsherr, better known as Magneto.

From the beginning we know that these friends will ultimately be divided by their convictions and their approach to the conflict between humans and mutants a concept which was explored in the original trilogy as an allegory for human rights issues and the struggle of different minorities, and is extrapolated in this film to the decades-long Cold War between the world`s super powers. 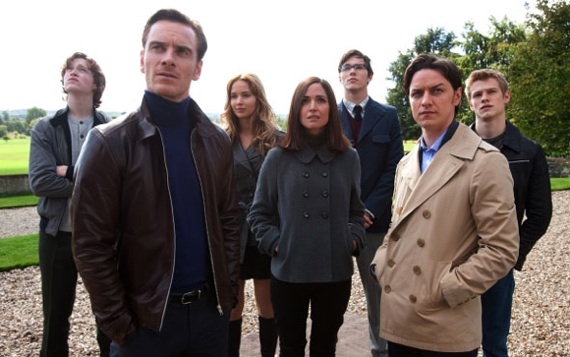 First Class is the first superhero film whose fictional story is set around real life events; in this case, the Cuban missile crisis of 1962, and the high risk creative decision is such a success that it wouldn’t be surprising if started a trend. Another innovation is the way it’s structured to play out like a James Bond movie with mutants, with the right amount of intrigue, action and sexiness.

The cast is pure perfection, with James McAvoy playing a less-than-perfect Professor X, and Michael Fassbender offering a true breakthrough performance that makes him this decade`s Hugh Jackman a star in the making. Kevin Bacon delivers a deliciously evil Shaw and January Jones continues with her Mad Men 60s beauty and glamour by giving life to Emma Frost. A special mention goes to Jennifer Lawrence as a young Mystique, proving that her acclaimed debut in Winter`s Bone is more than just beginner’s luck.

First Class is the perfect start to a new trilogy; all we can do is hope that either Vaughn will stay on board to maintain a strong creative vision in the upcoming entries, or that future films will be handed to directors who truly love these mutants as much as audiences do.

SUMMARY: Pure class in a film packed with big action and big ideas.