While superheroes do most of the world-saving on the big and small screen these days, back in the ’60s, that was primarily the domain of the superspy. In this reboot of the classic TV show, we are transported back to 1963, at the height of the Cold War. When nuclear scientist Udo Teller (Christian Berkel) goes missing, American and Soviet intelligence agencies form an uneasy alliance to track him down. CIA agent Napoleon Solo (Cavill) and KGB operative Illya Kuryakin (Hammer) must go undercover to find Teller, with Kuryakin posing as the fiancé of Teller’s daughter, Gabby (Vikander). Gabby’s uncle Rudi (Sylvester Groth) works for an Italian shipping company run by Alexander (Luca Calvani) and Victoria Vinciguerra (Debicki), a couple in cahoots with former Nazis and with deadly designs on cutting-edge nuclear technology. Solo and Kuryakin have to work through their obvious differences, while secretly pursuing their own agendas as the world stands on the brink of an all-out nuclear calamity. The seeds for a new agency, the United Network Command for Law and Enforcement (U.N.C.L.E.), are thus sown. 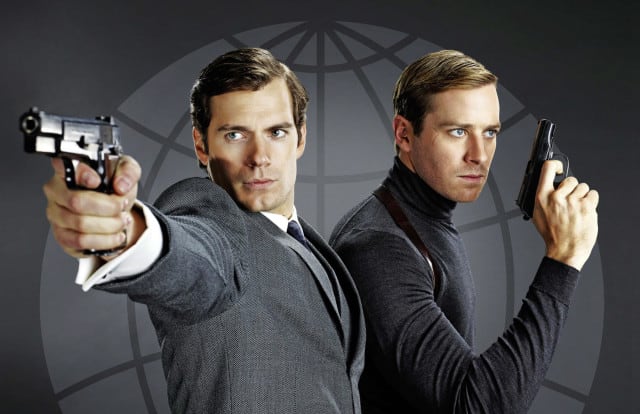 A cinematic Man From U.N.C.L.E. reboot has been in the works at Warner Bros. for over a decade, with a multitude of writers and a laundry list of directors including Quentin Tarantino, Steven Soderbergh and Matthew Vaughn attached at some point or another. Practically every Hollywood male A-lister, from Christian Bale to Michael Fassbender to Tom Cruise, was considered for the lead role of Napoleon Solo. The film finally arrives with director Guy Ritchie at the helm and the Superman of the hour, Henry Cavill, playing Solo. Ritchie has obviously set out to make a throwback that stops a safe distance short of being a parody, seeing as this genre and this time period does lend itself so well to being lampooned. “Groovy, baby”, anyone? Or maybe “LANAAAA!”? The end result is a bog-standard espionage thriller that Ritchie tries his best to spice up. 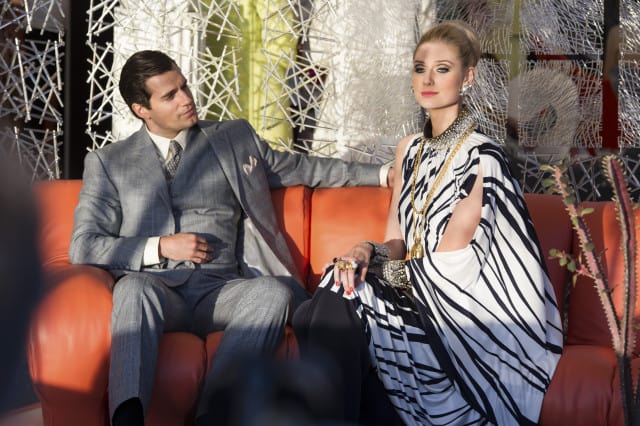 This is very much a case of style over substance, as it has been with most of Ritchie’s movies. Editor James Herbert employs funky transitions and split-screen effects, while the subtitles are rendered in an old-timey font with yellow lettering. Composer Daniel Pemberton’s jazz flute-heavy retro score is an aural treat and a refreshing change from the same-old same-old Hans Zimmer-style action-movie music audiences have become accustomed to. You Work For Me, performed by Laura Mvula, is a wonderful homage to the Shirley Bassey-sung Bond themes of yore. There are also a few clever uses of cinematic sleight-of-hand, wherein the characters reveal something to each other but the audience is left in the dark until an opportune moment.

Unfortunately, most of what’s interesting about this is purely superficial. The screenplay is heavy on both unwieldy exposition and double entendres that just aren’t quite witty enough. The pacing is patchy at best, with noticeable talky stretches in between the action. While there are several fun set-pieces, including a boat chase as seen from a unique point of view, the film never achieves genuine edge-of-your-seat thrills. Part of the climax includes a dune-buggy chase that is somewhat incoherently shot. The comparisons to the recent Mission: Impossible – Rogue Nation are unavoidable, and that film certainly outclasses The Man From U.N.C.L.E. when it comes to exhilarating stunts. 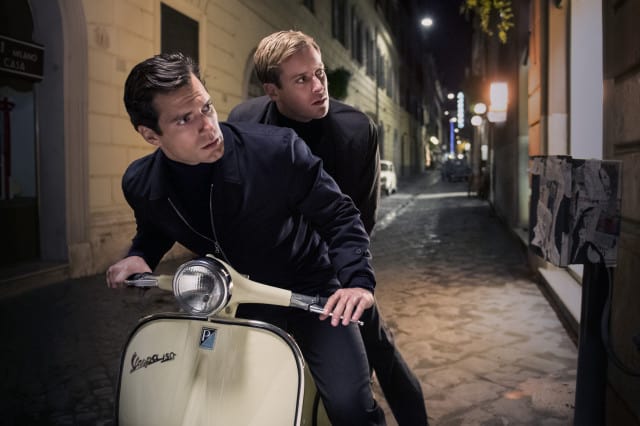 Cavill, stepping into the role originated by Robert Vaughn, is appropriately debonair and radiates old-school chic, reminding audiences that he was only narrowly beaten to the James Bond role by Daniel Craig. Cavill is not the most arresting actor in the world and the cadence he affects sounds a little off at times, but he’s got his classically handsome features to fall back on. Hammer, succeeding David McCallum, fares little better in the accent department, but he looks like he’s in on the joke as the brawny, stoic Kuryakin, and he manages to be funny while playing the unfunny character. The scenes of comic one-upmanship and hints of bromance tend to hit their marks, even if this is far from the most memorable action-hero buddy pairing we’ve seen. There’s nothing particularly wrong with Cavill or Hammer’s performances per se, but they can’t help but feel like the third or fourth choices for the roles.

Swedish actress Vikander, who broke through with a mesmerising turn in sci-fi thriller Ex Machina, possesses the requisite slinky mystique as the leading lady here. The character is a mechanic and a skilled driver, with Vikander valiantly attempting to keep Gabby from coming off as a third wheel. Vikander also gets to display her comic chops, goofily dancing to Solomon Burke’s Cry To Me in an attempt to get Kuryakin to loosen up. Once again however, Mission: Impossible – Rogue Nation trumps this film in the female lead department, with fellow Swedish actress Rebecca Ferguson getting a meatier role in the proceedings. Debicki has fun as the femme fatale, but doesn’t go as deliciously dastardly as she needs to be an outstanding villainess. Hugh Grant balances out the charming and authoritative sides of Solo and Kuryakin’s boss Waverly, but he’s in this for a very short time.

The Man From U.N.C.L.E. is a watchable if unremarkable serving of spy-fi nostalgia. It’s sporadically entertaining and its leads are definitely very easy on the eye, but it’s lukewarm rather than sizzling, with all its snazziness strictly on the surface. While Warner Bros. had actively pursued a Man From U.N.C.L.E. reboot for quite a while, it doesn’t seem like something audiences in general were clamouring for. It has its moments, but not quite enough of them for it to be worth getting excited about.