Jeff Bridges has wanted to make a movie out of Lois Lowry’s The Giver for years. It’s easy to see why he had trouble doing so (the book is dense, philosophical and refuses to wrap things up in a neat package); it’s also easy to see why Hollywood finally clambered on board (everyone wants their own mega-successful franchise – think The Hunger Games – based on a dystopian young-adult novel). The final film is an uncomfortable blend of big ideas and mass-market commercialism: the plot proceeds in broadly the same direction, but details small and large have been altered to make it palatable for as broad an audience as possible. 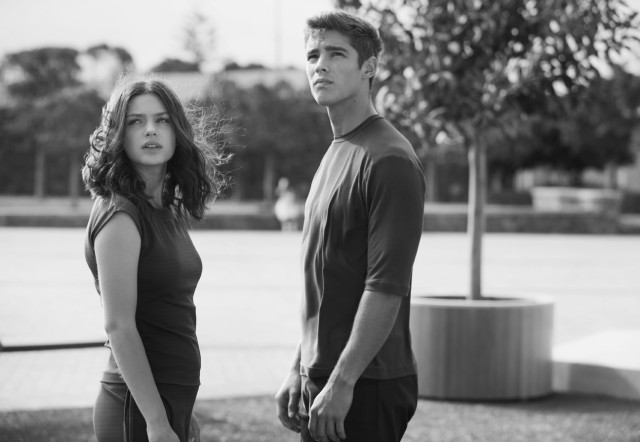 Jonas (Thwaites) has grown up in a gentle, rule-bound society in which everyone is polite and amiable and individual differences are kept to a minimum. When he comes of age, he and his best friends Asher (Cameron Monaghan) and Fiona (Rush) nervously await the job assignments that will move them towards the next stage of their well-ordered lives. But Jonas receives the shock of his young life when the stern, steely Chief Elder (Streep) announces that he will take on the single most important job in the community. As the next Receiver of Memory, he will work with the incumbent Receiver – now more appropriately called the Giver (Bridges) – who will impart to him the memories, and possibly wisdom, that have long been lost to time and everyone Jonas has ever known.

As a film, The Giver has a few things to recommend it. Though it loses much of the nuance of the novel, the complex ideas are still there. As Jonas peels away the cool, calm veneer of his old life, he comes to understand, appreciate and lament the sacrifices made to create the world in which he lives. The futuristic community is well-designed: people wander through a stainless-steel, white-washed network of modern buildings, clad in regulation clothing, clapping in unison with their left hands pounding their thighs. The use of colour – a key plot point within the book – is judiciously applied to Jonas’ awakening consciousness: he literally sees new bursts of red and green and blue, his home and his friends fading from monochrome into sepia and, finally, falling headlong into a riot of colours. 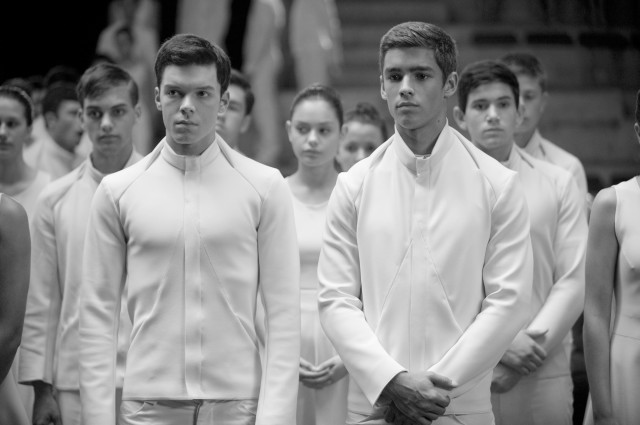 But the film never quite seems to settle into itself. Its more philosophical message is lost within the constant, confusing shifts in its storyline. At one moment, The Giver is a full-blown romance, as Jonas tries to save Fiona from the blinkered drudgery of his former existence. In the next breath, it’s a thriller tainted by the villainous shadow of the Chief Elder, who watches Jonas’ every move – with the help of his own mother (Holmes) – to ensure that he doesn’t become a threat to the community. Finally, it morphs awkwardly into an action movie, pitting friend against friend in a brave, if possibly foolish, bid for some kind of freedom.

Fans of the book will know why the film plays out so strangely. Some of the changes made to the trajectory of Jonas’ story are more understandable than others: for example, Jonas is aged up, from twelve to sixteen (which nevertheless requires the 25-year-old Thwaites to play a decade younger than his real age). Others changes become problems for the plot. In the novel, Jonas’ romance with Fiona unfolds in hints and never develops into anything concrete. Similarly, the Chief Elder is more drone than tyrant, and barely registers as a presence in the book. Changing and beefing up both elements for the film creates a whole new set of contradictions. For instance, in a people shorn of genuine feelings, identity and memories, why does the Chief Elder behave in the way she does? 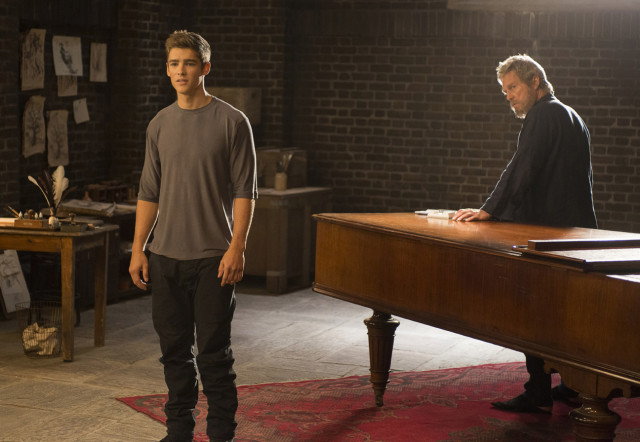 Of the entire cast, Bridges finds the most to say and do with the Giver – a man bent in two and nearly broken by the weight of the burden he carries: a mix of memory and tragedy. For a more-or-less made-up character, Streep also finds a surprising depth to the seemingly odious actions of the Chief Elder. In the flicker of an eye or a twist of her lips, she hints at a history with the Giver in which choices were made and opportunities were lost. Thwaites fares less well: he carries the film dutifully, but plays his pivotal role without much in the way of depth or soul.

That, in a sense, is the biggest problem with The Giver. It tells broadly the same story set out in Lowry’s book, but seems to have missed the point of it all. Instead of allowing its powerful ideas to deepen and grow organically, the film bluntly lays them out, one after the other, and shoves them towards an ending that might never have been there to begin with. Lowry’s book refused to give its readers any easy answers; the film, smart as it can be on occasion, too frequently feels as if it’s been constructed wholly out of them.

Summary: An ambitious adaptation of a difficult text, which tries but ultimately fails to find the troubled soul of its story.