The direct sequel to The Girl With The Dragon Tattoo, a film adaptation of the Swedish novel of the same name, The Girl In The Spider’s Web has Emmy Award winner Claire Foy in the helm as Lisbeth Salander, the Swedish vigilante-hacker (first played by Noomi Rapace in the Swedish trilogy and last played by Rooney Mara).

Foy is one of the most prolific actresses right now — from the tough wife of paralyzed Robin Cavendish in Breathe and breaking the stay-at-home wife stereotype as Neil Armstrong’s wife in First Man, to a victim of an elaborate kidnapping Sawyer Valenti in Unsane and Queen Elizabeth II in The Crown, she proves to have an extremely wide range of acting capabilities. 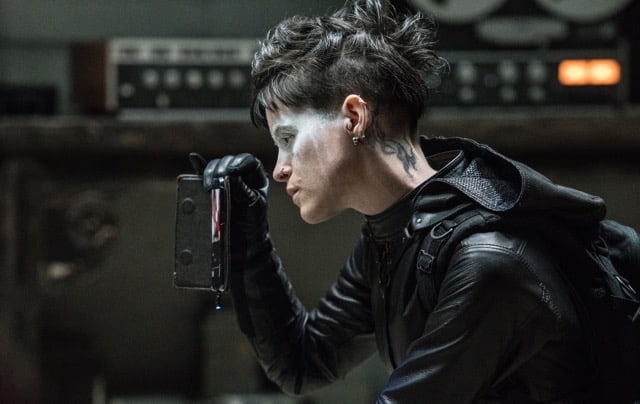 Spider’s Web opens with two little girls playing chess, who are later revealed to be Lisbeth and her younger sister, Camilla (Sylvia Hoeks as the older Camilla). Their servant ushers them to see their father in his bedroom where it’s implied that he’s about to sexually abuse them. Lisbeth pulls her sister away to escape but reaches a steep drop at their balcony into the freezing cold; Camilla watches and Lisbeth jumps.

Fast forward almost two decades later, Lisbeth is now a female Robin Hood-esque vigilante who hacks into wealthy and abusive men’s bank accounts to give to their wives and mistresses.

When ex-American nuclear engineer Frans Balder (Stephen Merchant) contracts Lisbeth to “retrieve” a nuclear program from the US government, her path crosses with ex-lover journalist Mikael Blomkvist (Sverrir Gudnason) and US Intelligence operative Neeham (Lakeith Stanfield, Get Out). What follows are a series of cat-and-mouse pursuits, a lacklustre second act, and a finale of fairly predictable twists.

Nevertheless, director and co-writer Fede Alvarez (Don’t Breathe, Evil Dead) brings the key characters together in a convincing way other crime-dramas fail to pull off, making up for the draggy and sloppy second act. Moreover, the action set pieces and chase sequences are gripping, reminiscent of his style in previous works where he masterfully uses genuine suspense to keep you at the edge of your seat.

The most important question fans of the novel and film series has is, of course, does Foy deliver a performance comparable to Mara? The short answer is yes, and that’s not to say Mara was bad — she’s brilliant. But Spider’s Web focuses more on Lisbeth, her past, and her personal arc. And Foy makes good use of that opportunity to create a multi-dimensional anti-hero for whom we can and want to root.