When a bad movie manages to gather big names, you start to question whether the stars made a bad decision or the director somehow cons them into believing the film idea is good.

Starring Pulp Fiction (1994) stars Tim Roth and Uma Thurman as an over-the-top British con duo, Peter and Harriet, who spends practically every moment drinking booze, taking drugs, and spewing profanities left and right. Swearing is apparently Peter and Harriet’s fillers, which can get on your nerves just 30 minutes in The Brits Are Coming.

The movie starts off with a promising opening sequence, weaving some mystery around Thurman’s seductive and domineering Harriet, as she exchanges a drug parcel with a buyer disguised as a nun. The story falls apart right after this scene, though, as the movie doesn’t see a need to explain anything, other than monologues by the paper-thin characters. 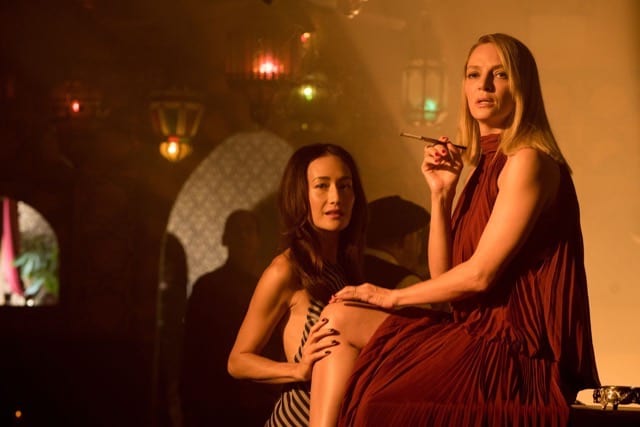 There isn’t much to say about the story, other than it’s a heist by Peter and Harriet to steal a five-million-dollar ring from Peter’s ex-lover, Jackie (Alice Eve), who is in a messed-up love triangle with her crazed filmmaker husband, Gabriel (Crispin Glover) and overly-possessive mistress, Vivien (Sofía Vergara).

Maggie Q plays Irina, a Russian (though she hardly looks any Russian) mafia boss-lady who’s madly in love with Harriet, and is after the con duo after they squandered all her drug money on poker and… other drugs. Maggie Q is vicious and hot as usual, but she serves nothing more than a mere plot device for the heist, which is disappointingly bland and stupid, even. 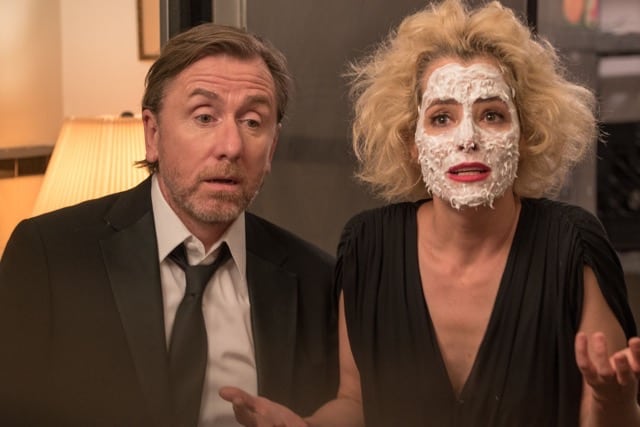 Sadly, there is little to nothing worth commending about The Brits Are Coming, other than some well-executed delivery of jokes and gags. The cast members are effective performers, but they can only do so much with a badly-written script.

The Brits Are Coming is best watched if you want to waste some time laughing at how the film doesn’t take itself seriously and how bad it actually is. But be warned, you only have some gags and laughs to drag you through a torturous 95 minutes of incoherent storytelling and distasteful dialogue.

Summary: The Brits Are Coming is the kind of movie that makes you facepalm at almost every scene, questioning why the stars even agreed to be part of any of it.