The Low-Down: The Terminator franchise is a defining one in the genres of sci-fi, action and horror. While the imagery and the catchphrases have become ingrained in popular culture, the film series has struggled to recapture the glory of the first two entries. The underrated spinoff television series was sadly short-lived. James Cameron, who directed the first two films and helmed the theme park attraction but has had no direct involvement in the series since then, returns as a producer for this sixth film. 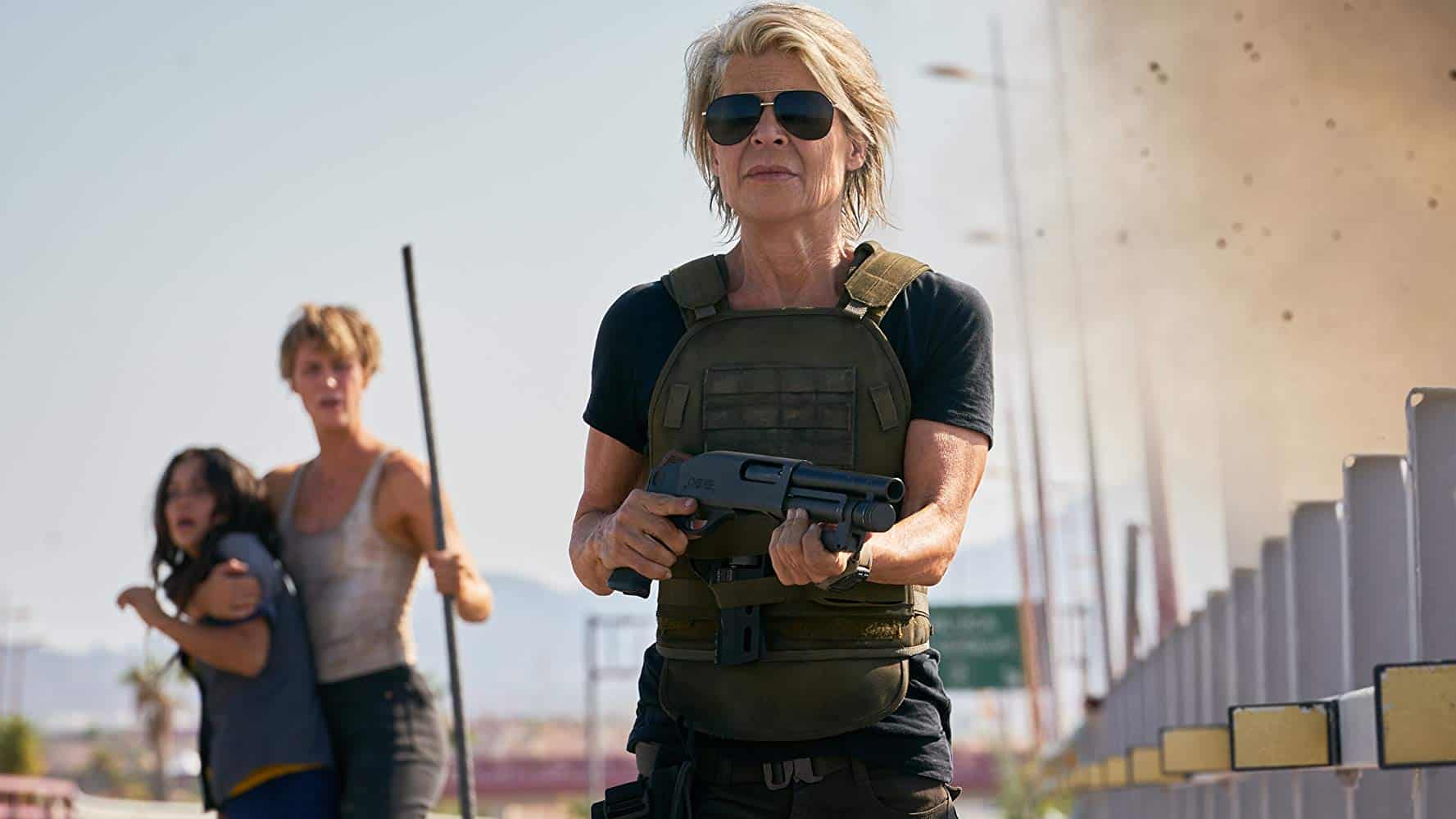 The Story: It is 27 years after the events of Terminator 2: Judgement Day. A young Mexican woman named Daniella “Dani” Ramos (Natalia Reyes) has been targeted by the Rev-9 Terminator (Gabriel Luna), who has been sent back in time to kill her. Grace (Mackenzie Davis), a cybernetically-enhanced human soldier from the future, has been sent back in time to protect Dani. Sarah Connor (Linda Hamilton), who has spent the last two decades hunting Terminators, joins Dani and Grace to fight the seemingly invincible Rev-9. Along the way, they meet the T-800 (Arnold Schwarzenegger), one of several sent back in time after Sarah’s son John Connor years ago, who has been keeping a low profile. The future is once again in the hands of Sarah Connor, who has gained new allies in her long-term battle against the machines. 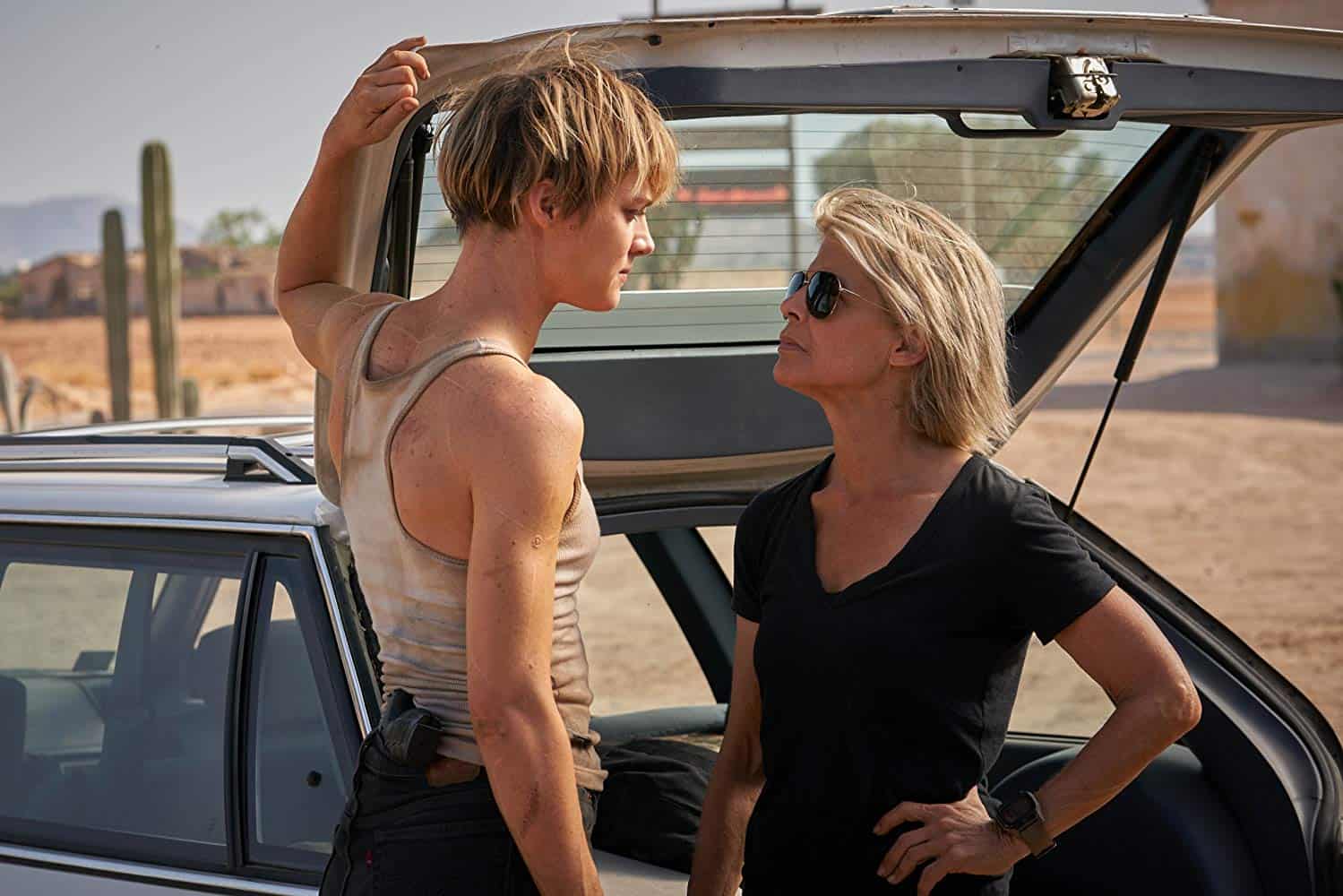 The Good: Terminator: Dark Fate learns from the failure of the previous entries. The most recent Terminator film before this, Terminator: Genisys, was a jumbled mess of multiple timelines and attempted to remix beloved elements of the series, alienating fans in the process. Dark Fate benefits from more of a back-to-basics approach, presenting a straightforward story without relying too much on exposition. It functions as a direct sequel to Judgement Day, with all the other films taking place in alternate timelines. This is not dissimilar to 2018’s Halloween, which was a direct sequel to the 1978 movie and ignored the many sequels that were made in the intervening years. 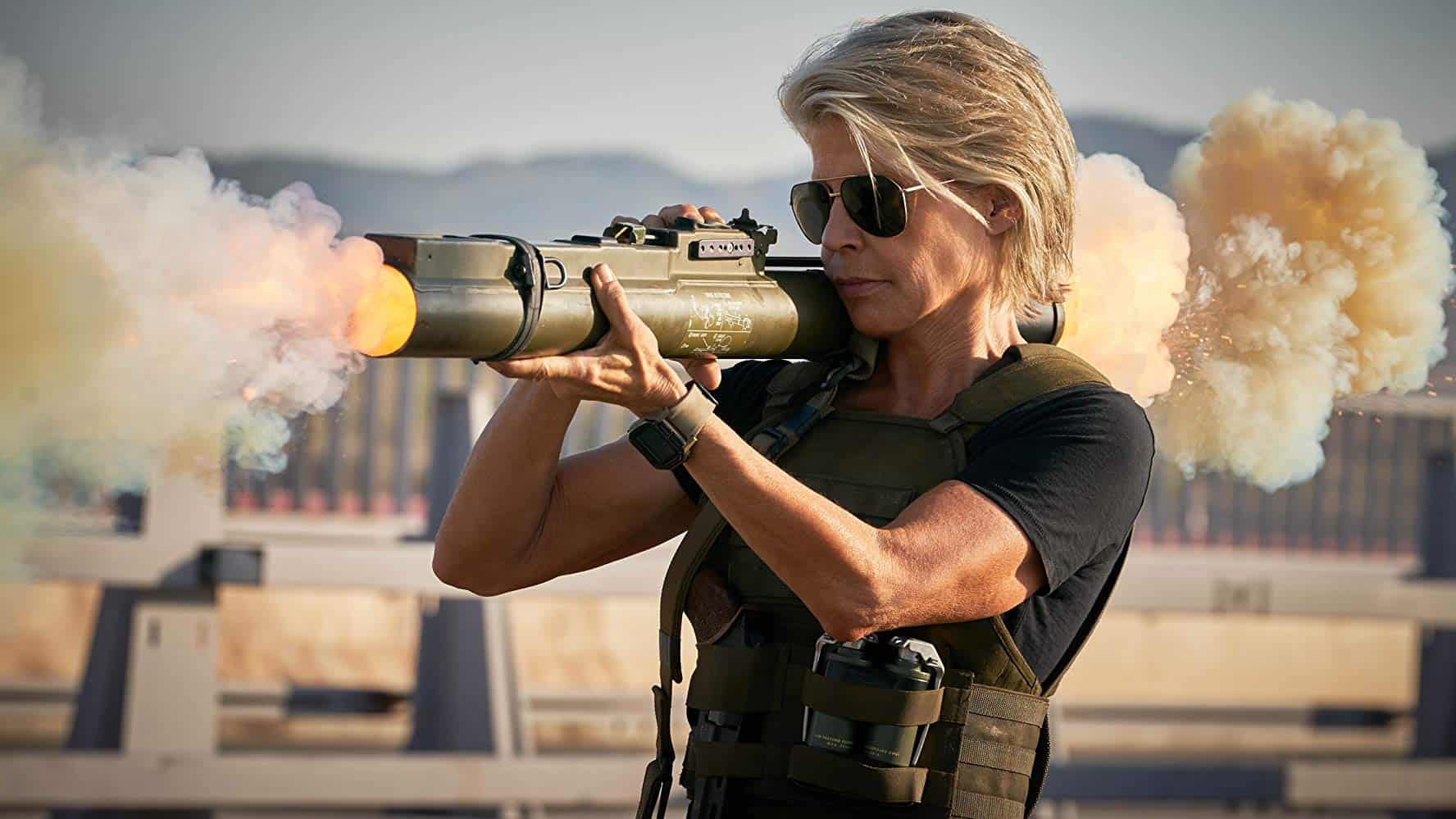 The film’s biggest asset is Linda Hamilton, who has not appeared in any of the films since Judgement Day. This is much more than the glorified cameo which we could’ve gotten, with the Sarah Connor character front and centre. Hamilton took some convincing to come back on board, and the film really wouldn’t have worked if she had said no. Hamilton easily conveys the no-nonsense toughness fans of the series know and love, but also delivers a genuinely good performance beyond that. The NC16-rating means that she gets to swear a whole lot, and she’s amazing at it. There are several moments when just a look from Hamilton tells us so much. This is a character who has been through the wringer and would like the world to think she can just shrug it off, but there is a lot of sadness and pain that she’s internalised – when those shards are visible, that’s when Hamilton’s immense contribution to the movie really registers. 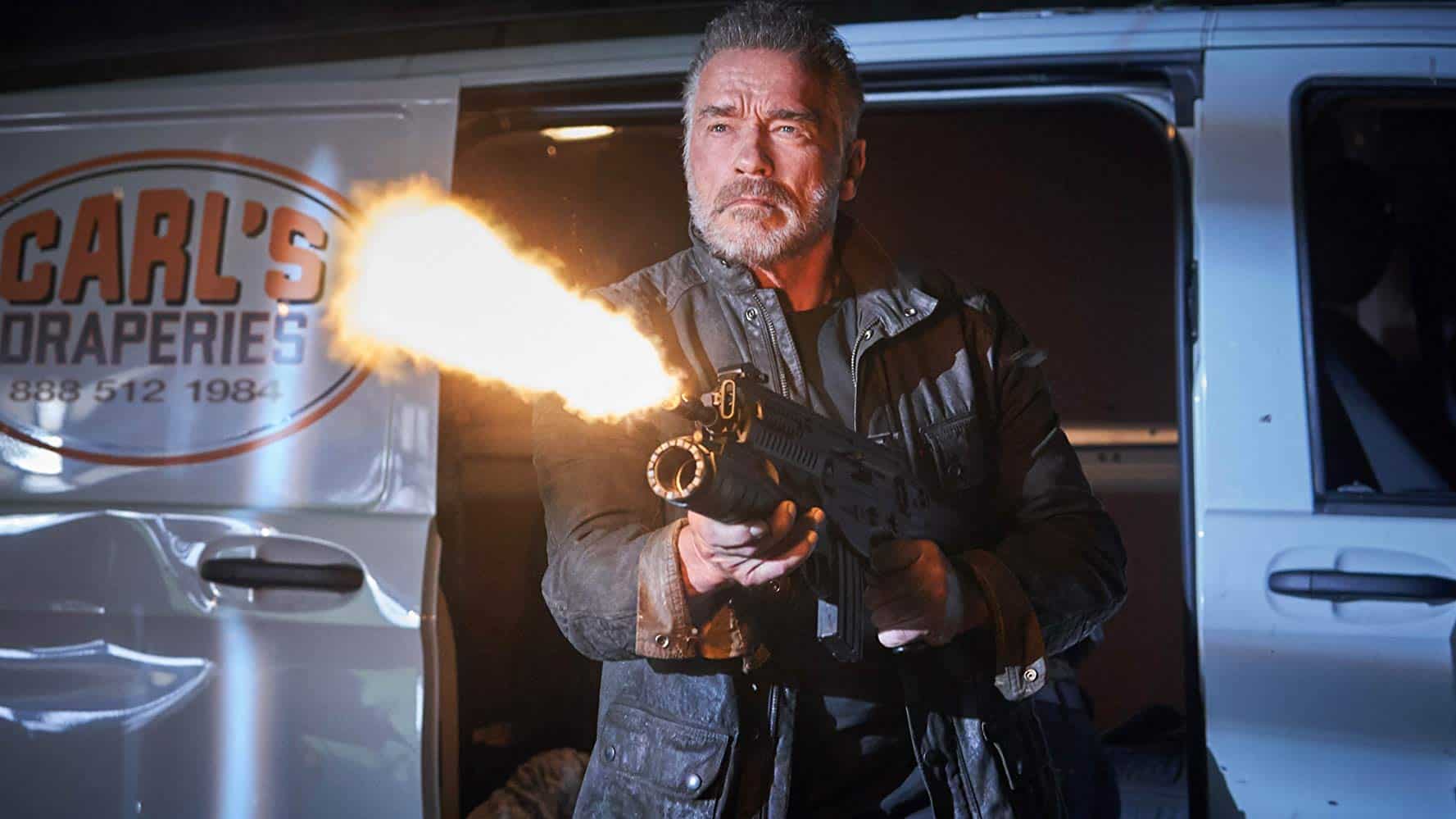 Arnold Schwarzenegger appears in more of a supporting capacity, but completely steals the show when he’s onscreen. The film wisely makes use of Schwarzenegger’s comedic talents while also preserving the formidable physical power associated with the T-800 character.

One scene in the film showcases the most convincing digital de-aging/face replacement effects we’ve ever seen.

The Not-So-Good: The film clearly aspires to the heights of Judgement Day, so it is noticeable when it falls short of those heights. There are moments when the film is almost emotional, and while there are some moving beats, there is nothing nearly as sublime as “I know now why you cry, but it’s something that I could never do.” While the stronger connection to the first two films anchors Dark Fate in the tone and mythos of the earlier movies, it also prevents the movie from being too innovative on its own terms. Also, much of the events in Judgement Day seem to have been rendered moot – not quite to the level of “Ripley finds Newt and Hicks dead at the beginning of Alien 3,” but it does approach that.

While some action sequences are brilliantly executed, others feel just a touch too synthetic. The visual effects are leaps and bounds over the somewhat unpolished work seen in Genisys, but there are still moments when one thing made of CGI is being thrown into another thing also made of CGI. Out of necessity, the earlier films made ingenious use of practical animatronic effects and miniature models. Director Tim Miller of Deadpool fame is a co-founder of Blur Studio, best known for making animated cutscenes and cinematics for video games. The action sequences in Dark Fate can sometimes come off as a little too video game-esque, but Miller does often demonstrate a keen awareness of how to place elements in space to create action sequences. 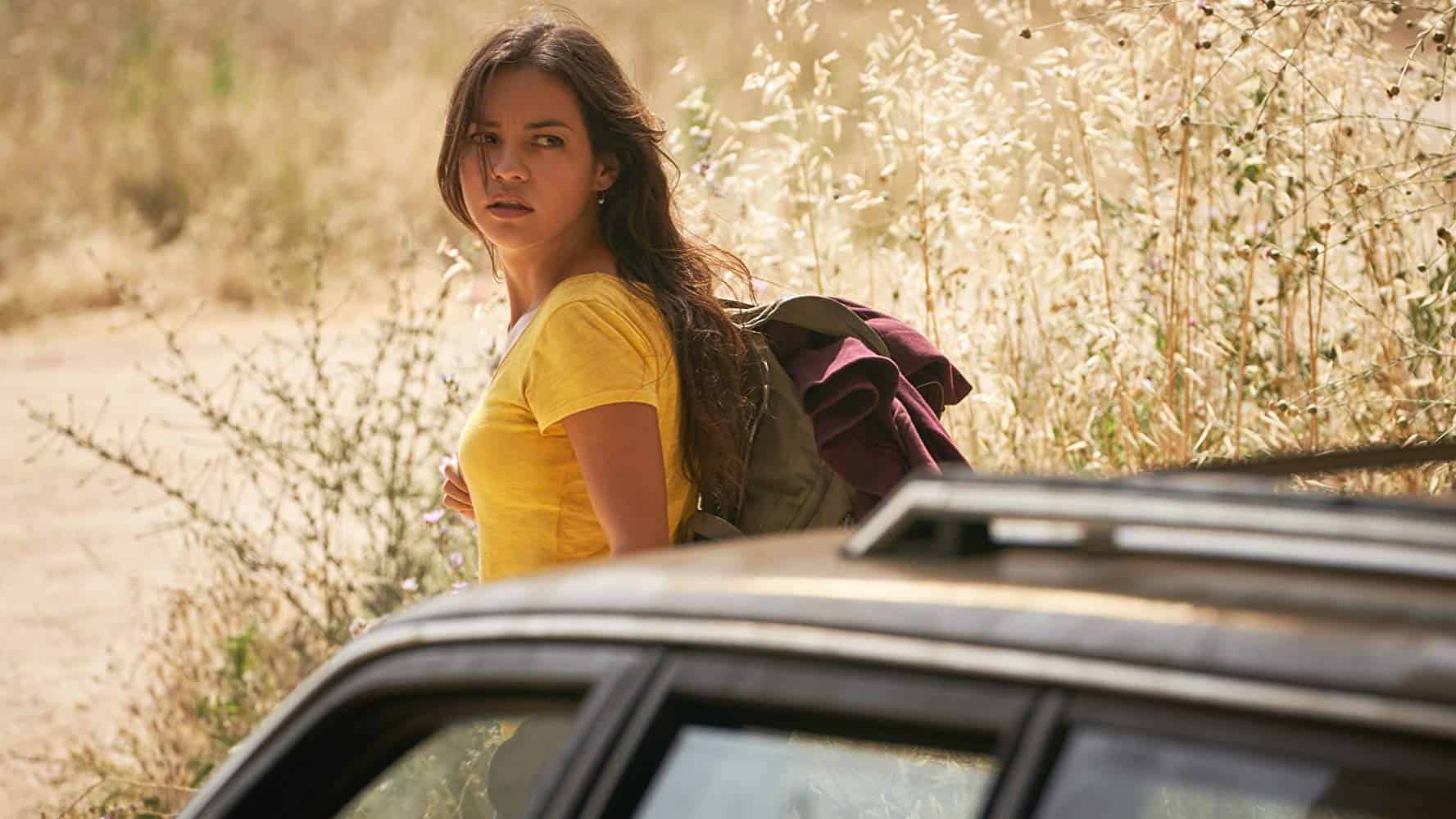 The Dani character is sympathetic and Natalia Reyes gives the role her all, but she can sometimes come off as a little whiny and is not written that well.

Mean Machines: Another way that the film echoes Judgement Day is in its villain, the shape-shifting Rev-9. Like Robert Patrick, Gabriel Luna is less conspicuous in a crowd than Arnold Schwarzenegger, meaning the Rev-9 is more convincing as an infiltration unit. It also has a neat gimmick of being able to separate itself into liquid metal outer shell and endoskeleton, allowing it to perform tag-team attacks. Rev-9 is perhaps a touch too indestructible, such that the action sequences become a little repetitive. 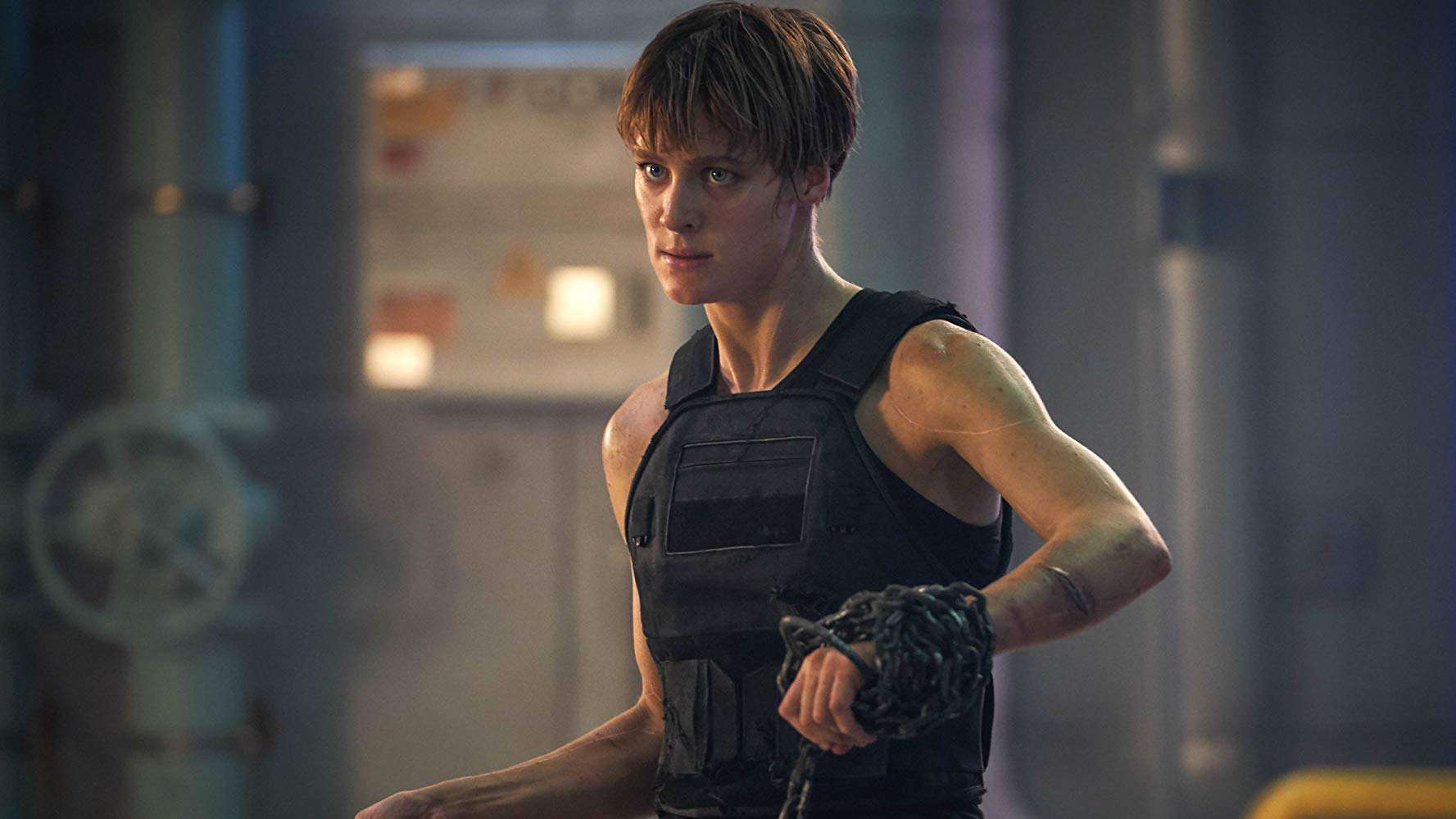 Mackenzie Davis’ Grace is a great addition to the canon. This reviewer enjoys seeing actors whom one wouldn’t typically associate with action movies take on action-heavy roles. Davis underwent a complete physical transformation to play the muscular, angular Grace. There is a tragedy to the character, who has sacrificed her physical autonomy for the cause, so she is always sympathetic. 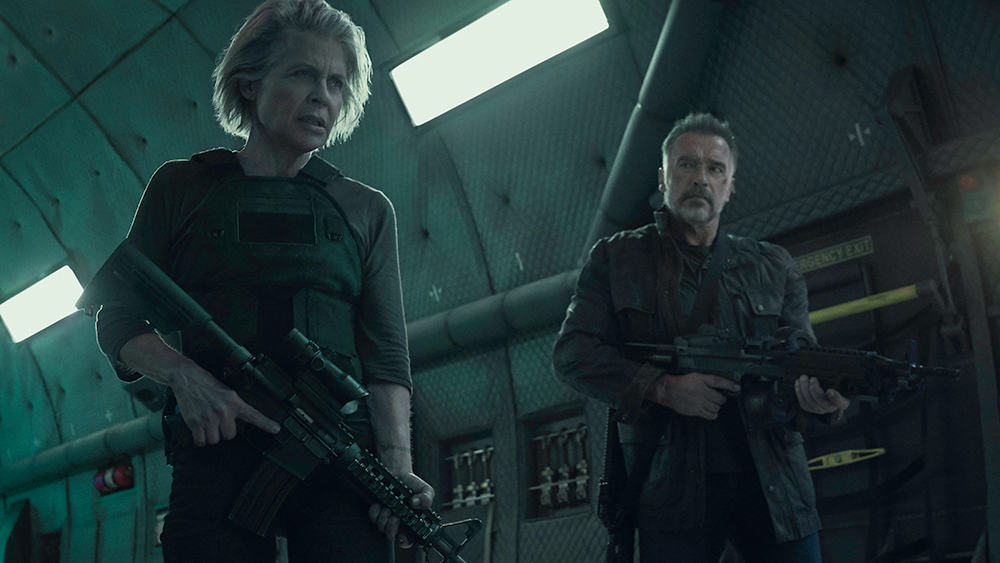 What’s past is prologue: Terminator: Dark Fate is in a way commenting on the history of the series. There is so much that’s memorable about the first two Terminator films that it’s hard to resist the temptation to make constant references to them. Yes, Sarah Connor does say “I’ll be back”, but Dark Fate demonstrates restraint and refuses to lean on the series’ storied past as a crutch.

Recommended? Yes. It’s not brilliant, but especially when compared to Genisys, this is a lot closer to what a Terminator movie should feel like.