From Bond to Bourne, by way of The Naked Gun and Johnny English, movies about covert operatives kicking butt and saving the day – not always intentionally – have become a genre unto themselves. That’s why the advent of Paul Feig’s Spy is faintly depressing: how is a female-led comedy spoofing the secret world of spies only happening now, in 2015? At least there’s nothing at all depressing about the film itself: Spy is a blast of fun, cheeky adrenaline which cleverly sends up the dude-centric conventions of the genre while crafting a world and characters that both embrace and defy stereotypes. 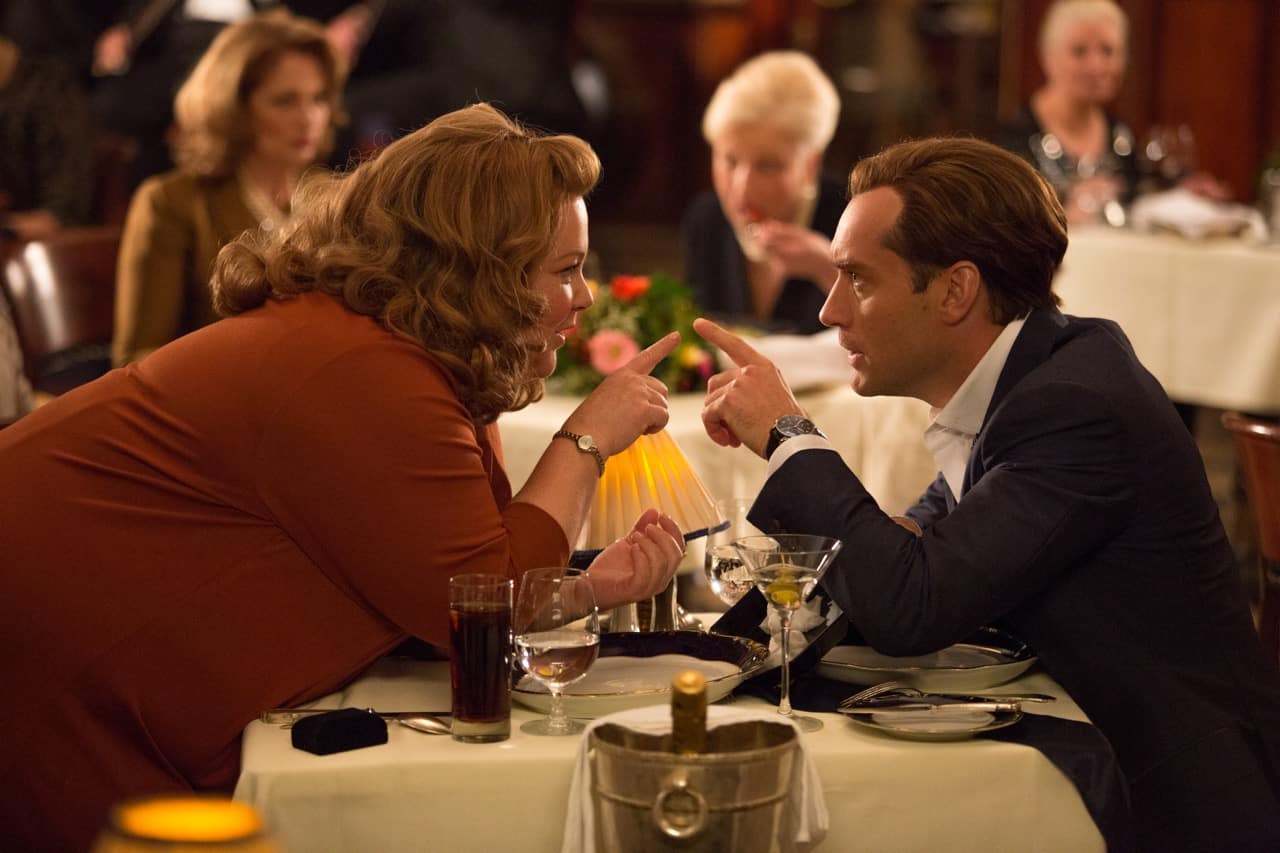 Susan Cooper (McCarthy) wanted a life of adventure and mystery when she joined the CIA. However, despite turning in an outstanding performance at the training academy, she’s faded almost literally into the background. In the perennially vermin-infested confines of CIA HQ, she commiserates with fellow desk jockey Nancy (Hart) while providing able support for the agency’s top operative: cocky, suave Bradley Fine (Law). But, when Fine runs afoul of ruthless arms dealer Raina Boyanov (Byrne), Susan finds herself in a unique position to take action – she’s the only fully-trained agent who is also a complete unknown in the field.

Many spy spoofs falter in balancing comedy with plot and action – a problem that Spy largely manages to avoid until its almost breathlessly overstuffed ending. Feig’s script is sharp and witty, poking fun at character and convention while never losing sight of the power of a good pratfall. Considering how many gags and jokes he packs into each frame of the film, it’s a marvel that so many land as well as they do. But land they do, from the almost outrageously frumpy cover identities Susan is stuck with, to the frankly ridiculous rogue antics of Rick Ford (Statham), an unpredictable, hot-headed agent who resigns in a rage-fuelled fit of machismo when Susan is tasked to pick up where Fine left off. 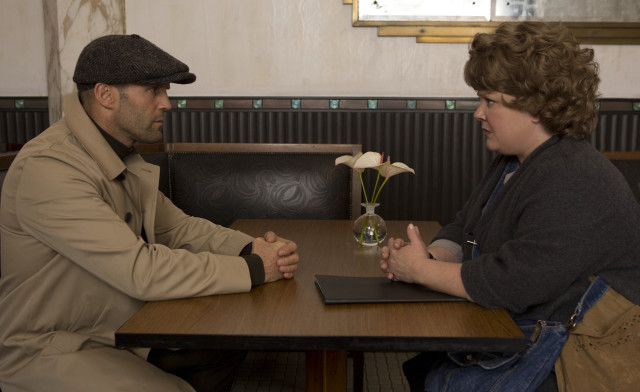 Beyond the comedy, however, what keeps the film chugging along is the fact that Feig also cannily supplies Susan with plenty of credible obstacles derived from plot and character. There’s the nominal villain, of course: petulant, haughty Raina, who orchestrates death and destruction without blinking an eye. But the plot extends beyond Raina and her histrionics. Susan has quite a few lovely character moments too. Not only does she turn her invisibility to her advantage when she first observes then infiltrates Raina’s operation, Susan also demonstrates to everyone, herself included, that she really is every bit as competent – if not more so – than her male counterparts.

Feig even throws in some action sequences worthy – and deliberately reminiscent – of a top-grade spy flick, from an escape on a motorboat under heavy fire, through to a spectacular mid-air confrontation between the forces of good and evil. The fight scenes are brutally well-choreographed, with Susan giving every bit as good as she gets as she efficiently takes down everyone in her path. That said, Spy does stumble a little as it barrels towards its gigantic final set-piece, the action beats building up in a way that suggest Feig is trying to write himself out of a tough spot. 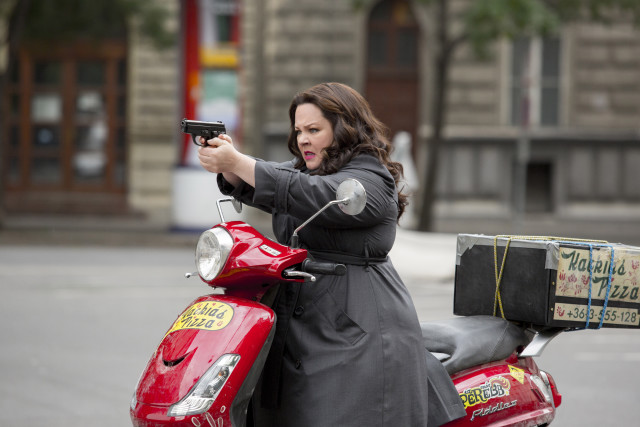 But Feig never loses sight of his main character, who proves to be the finest gift he’s yet given to his muse (yes, that includes the Oscar nomination she picked up for her role in Bridesmaids and her enduring friendship with Sandra Bullock, her co-star in The Heat). Susan is a role that sits comfortably in McCarthy’s wheelhouse, allowing her to deploy her irrepressible charm and impeccable comic timing, while also suggesting a wealth of emotion and depth beneath a relentlessly sunny exterior. But it’s also a role that allows audiences to look beyond the brash, loud characters she’s become known for in her film career – one that celebrates McCarthy as a comedian, an actress and a person. The fact that the film never once doubts Susan’s abilities in the field is one of the most empowering statements you’ll see in a film this year.

Though she’s more than capable of doing so, McCarthy doesn’t have to carry the entire film by herself. Feig has provided her with a stellar supporting cast – including Allison Janney as Susan’s humourless boss and Peter Serafinowicz as an Italian contact with a healthy appreciation of Susan’s wiles. Law turns in a sparklingly self-deprecating performance as the film’s version of Bond, while Hart bumbles her way endearingly through proceedings in much the same way she does on her eponymous hit British sitcom. 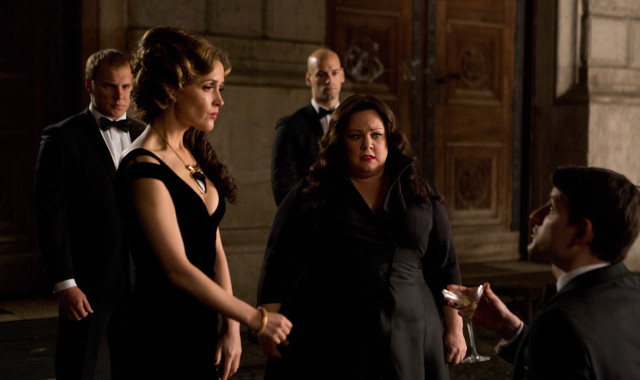 But the real standouts in the supporting cast are Byrne and Statham, both tasked with playing loud, outlandish characters who are just barely more than caricatures. Byrne is delightfully silly as a spoilt daughter who has inherited a highly lucrative nuclear device, sneaking quite a bit of charm into the menace that accompanies Raina’s more callous decisions. Statham, meanwhile, flings his grim, taciturn demeanour – cultivated and recycled in a string of cookie-cutter action thrillers – out the window. He plays loose cannon Ford with a joyful pomposity that’s joyous to watch.

At a time when the sexism that still riddles Hollywood is being actively discussed and dissected (courtesy of films like Mad Max: Fury Road and Avengers: Age Of Ultron), Spy delivers the goods as a feminist twist on a genre that has been dominated by men for far too long. Its female characters are a magnificent blend of strong and silly, tough and tender all at once – incontrovertible proof, not that it should be needed in the first place, that women are funny and can headline genres typically associated with the male of the species. But, most importantly of all, Spy is delightful in and of itself. Politics aside, this is, quite simply, a top-notch spy comedy, jammed full of big laughs and bigger action – which is reason enough for it to be a big hit.

Summary: Nothing undercover about this film – it’s an outright hit.