Ghost The Musical tells the story of Sam Wheat, a Wall Street banker hopelessly in love with his artist girlfriend Molly. Following a violent mugging, Sam dies and finds himself stuck in limbo as a restless spirit, caught between this world and the next. As he uncovers the truth behind his murder, he attempts to warn Molly. He eventually reaches her through Oda Mae Brown, a con-artist and phony medium who comes into genuine contact with the deceased for the first time. Molly, along with Sam’s best friend and colleague Carl, are initially wary of Oda Mae, and Sam has to come to grips with his newfound afterlife as he watches over Molly from beyond the grave. 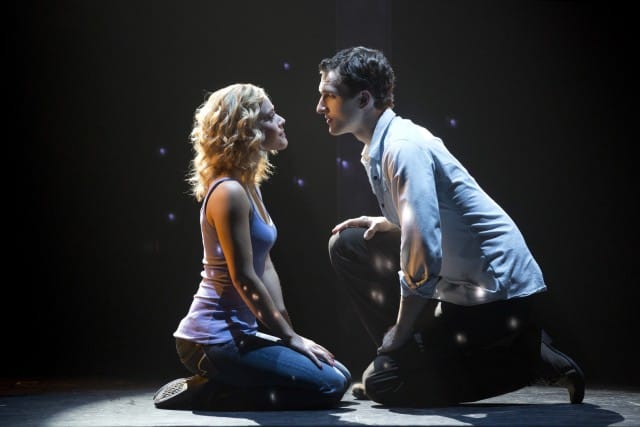 In order to portray the other-worldly effects so integral to the film, Ghost The Musical employs much buzzed-about illusions designed by Paul Kieve. One of the signature scenes of the musical has its protagonist Sam walk through a solid door. Another has subway train commuters flung out of their seats by paranormal activity. Moviegoers will know Kieve’s work from Harry Potter and the Prisoner of Azkaban and Hugo, for which he served as a magic consultant. Kieve holds the distinction of being the only illusionist to net the New York Drama Desk Award, which he won for Ghost The Musical. 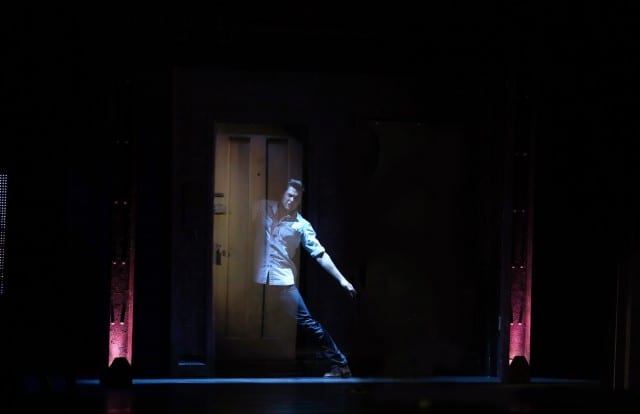 Unfortunately, we didn’t get to see any of the illusions at the press preview, which was a bit of a bummer after hearing so much about them. Thankfully, there is far more to the production than the novelty factor of its special effects, and three musical numbers were staged for us. These comprised the iconic pottery scene featuring The Righteous Brothers’ Unchained Melody, Nothing Stops Another Day and Oda Mae Brown’s big show-stopper I’m Outta Here. I’m Outta Here, in which Oda Mae fantasises about what she can do with an unexpected windfall, put some fancy choreography on display, with back-up dancers clad in glittery sequined suits and sunglasses.

After that, we got to talk to the cast, including Liam Doyle as Sam, Lucie Jones as Molly, David Roberts as Carl and Wendy Mae Brown as Oda Mae. The touring cast and crew, the majority of whom hail from the UK, have just arrived from the China tour, which took them to Beijing, Shanghai, Qingdao, Chongqing, Zhuhai and Taipei. Preparations were in full swing for the show’s Singapore engagement in the background as the interviews were conducted, and while jet-lagged and exhausted, the performers were friendly and, if you’ll pardon the pun, in good spirits. 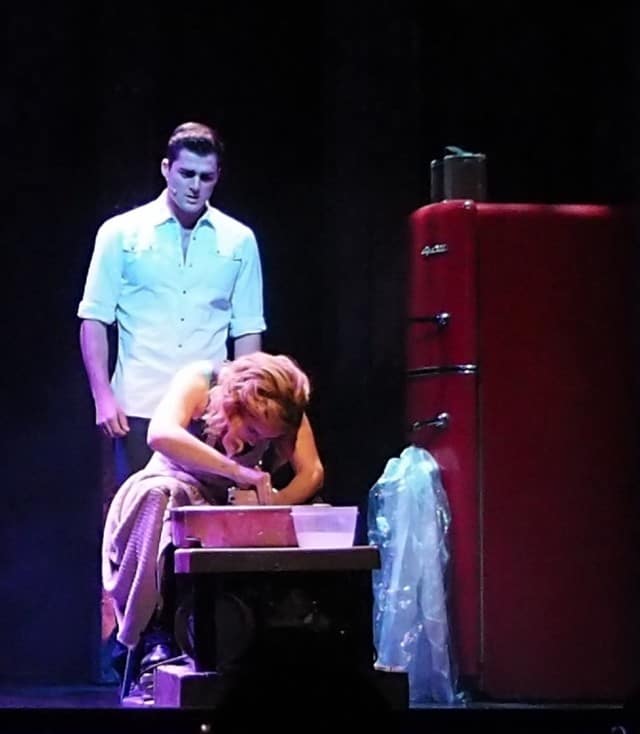 Doyle’s big break came when he won the reality competition show The Search for Troy Bolton as a teenager and got to play Troy Bolton in the UK touring production of High School Musical 2. Since then, Doyle’s credits have included Link Larkin in Hairspray (there’s a bit of Zac Efron theme going) and Fiyero in Wicked. “Whether you’ve seen the film or not, it doesn’t matter,” Doyle told us, calling Ghost “a timeless love story”. Discussing the emotional content of the show, he said “Everybody’s had that one person, or God forbid, might have that person that they didn’t get to say goodbye to and it helps so many people in the audience, you can hear them every night.” Doyle remarked that the show is physically and vocally demanding and it does take a lot of out of him, since he’s the lead. “I’ve worked it out: I’m off stage for three minutes in Act 1 and seven minutes in Act 2 and the show’s two and a half hours long,” he stated. “The music is very hard to sing, but so rewarding to sing.”

Jones’ career also has its roots in a reality TV singing contest, albeit a higher-profile one: she was a finalist in 2009’s season of The X Factor. She had since had roles on the TV shows Midsomer Murders and The Sarah Jane Adventures and has been a cast member in musicals like Les Misérables and American Psycho. Her preparation for the part of Molly in Ghost included taking pottery lessons and visiting a medium. She has not had any supernatural encounters of her own, but was open to learning about various beliefs in life after death. “The more you understand the mind-set of people who believe in these things, people who don’t believe in these things, people who have had experiences, people who think it’s all a load of rubbish, it’s so amazing to then find your journey through it and understand it yourself,” she said. Jones told us that she was rejected for many jobs “because people said I couldn’t act, and now I’m doing a huge acting role and am really enjoying it.” 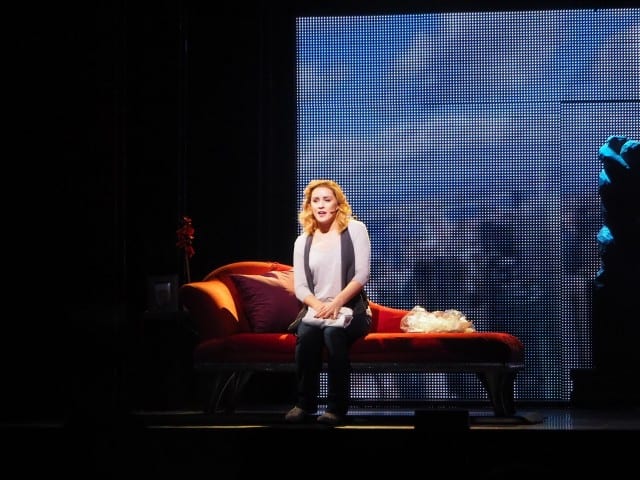 Roberts’ West End credits include Mamma Mia and Assassins “He’s a character that you could feel sorry for,” Roberts said of Carl. “He’s jealous of Sam and what he has and even though they’re two best friends, they’re like brothers, he’s not happy with that. He’s always wanting more, such is his life, he’s always striving for that. When asked what advice he would give to actors considering a theatre career, he said “Don’t give up, if it’s what you love to do, stick with it. You need to love it, because otherwise it can be a very, very hard thing to do, hard business.” Roberts isn’t a fan of the way reality TV contests like X Factor promise instant stardom. “It’s a cattle market, it’s getting worse and worse every year. You’ve got an audience screaming numbers of people they don’t want.” He clarified that he doesn’t blame the participants (his co-star Jones was an X-Factor finalist after all), but rather the process, which he likens to “a machine”.

One could say that Wendy Mae Brown was destined to play Oda Mae Brown, based on her name. Brown has acted in productions such as Rent, Porgy and Bess, Little Shop of Horrors and South Pacific. The character of the phony mystic who is suddenly contacted by an actual ghost is arguably the most memorable in the movie. Brown said she was given “absolute freedom” to make the role her own, adding “Your first thought is ‘oh, this is Whoopi Goldberg, I’ve got to top this,’ but then you have to let it go. So I let it go.” She had a particularly memorable story about her first time watching the film. “I remember really clearly because I’d just done a terrible audition for Trevor Nunn,” she recalled. Dejected after failing in front of the renowned theatre impresario, she slinked into the cinema to watch the film Ghost, which moved her to tears. “It takes a lot to make me cry at a movie. I’m not really a crying woman, but…I went on the journey from the start.” Possibly displaying a hint of psychic ability, Brown told us “I always said to myself, ‘this would be a great musical’.” 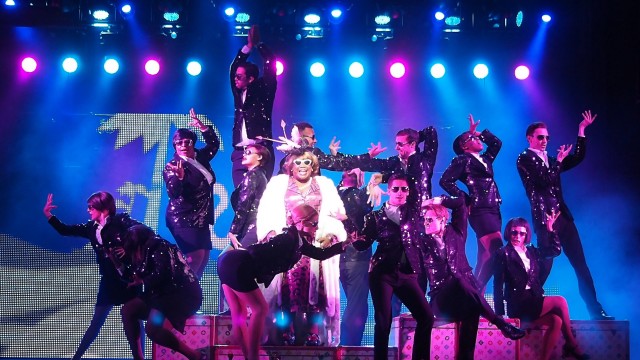 From what we’ve seen today, ditto.

Ghost The Musical is produced by GWB Entertainment in association with BASE Entertainment Asia and is running from 4 – 15 November 2015 at the Sands Theatre, MasterCard Theatres at Marina Bay Sands. Ticket prices are from S$85.