Han Solo, as played by the incomparably charming Harrison Ford, is one of the most iconic action heroes in all of cinematic history. There’s no denying that: it’s simply a fact of life, an immutable truth. You have to give LucasFilm and Disney some credit for having the balls to re-imagine so beloved a hero – re-casting him, giving him a love interest other than Leia, filling in gaps in his backstory – all at the risk of alienating a devoted fanbase that has loved one incarnation of Han Solo for decades. It’s a gamble that doesn’t quite pay off, unfortunately. This origin story is fairly entertaining as outer-space adventures go, but it lingers almost permanently in the key of too safe and too slow.

We first meet Han (Alden Ehrenreich) on his grim home planet of Corellia. An orphan and a petty thief, he’s been living the proverbial hard-knock life on the streets with his partner-in-crime, Qi’ra (Emilia Clarke). When the pair make an ill-fated attempt to escape, only Han manages to get away. He spends the next few years honing his craft as a pilot, while doing his best to get back to her side. Along the way, Han meets several individuals who will prove instrumental in shaping him into the charming rogue we already know and love: future first mate Chewbacca (Joonas Suotamo), pragmatic outlaw Tobias Beckett (Woody Harrelson) and suave smuggler Lando Calrissian (Donald Glover).

For both Star Wars novices and aficionados, there’s enough in Solo to enjoy. The stand-alone nature of this film makes it a decent jumping-on point for the uninitiated. There isn’t a ton of dense Star Wars lore that you need to know in order for key dramatic moments in the film to work. At the same time, life-long fans will finally get to see just how Han pulled off his legendary Kessel Run in 12 parsecs, even as the deepening bromance between Han and Chewie proves to be one of the film’s purest delights. Solo also boasts another scene-stealing droid (Phoebe Waller-Bridge’s spunky L3-37) and a few spectacular action sequences (particularly a mid-air train heist that defies both gravity and expectations). 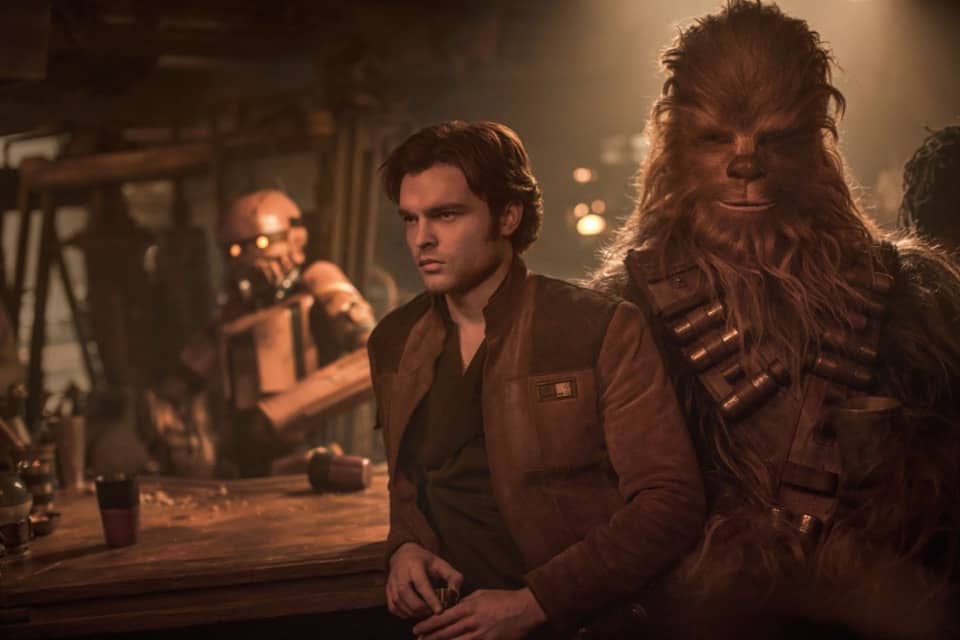 The trouble is that the film, as a whole, lacks the energy and inventiveness that ran through practically every frame of The Force Awakens and The Last Jedi. The heist at the heart of Solo is never quite as exhilarating as it seems to think it is. We should be swept along in the sheer epic adventure of it all. Instead, the interstellar journey feels like it’s checking off boxes (befriend Chewie, snag Millennium Falcon, survive Kessel Run) rather than letting loose and having fun. As a result, the film’s middle section sags and practically plods along. At least 20 minutes could have been sliced out of Solo without detriment to the story or its pace.

It’s no secret, of course, that Ron Howard came to the rescue after Phil Lord and Christopher Miller, the film’s original directors, were fired after almost five months of principal photography. That may be another reason for Solo’s comparative lack of spark. The unifying vision here isn’t the screwball anarchy of Lord and Miller’s The Lego Movie and 21 Jump Street – more’s the pity. This is by-the-numbers filmmaking, competently executed because Howard is one of Hollywood’s most reliable journeyman directors. It works, sure, but very little of it actually inspires or intrigues, apart from a doozy of a final-act character revelation that arrives almost too late to make its mark.

The same could be said of its main cast. Ehrenreich is serviceable as Han Solo, largely because he doesn’t try to slavishly imitate or channel his predecessor. (That’s a wise choice, by the way – only Harrison Ford can do Harrison Ford.) But he doesn’t pop off the screen the way he does in arthouse films like Hail, Caesar! It’s almost as if he got the same studio note that was handed to Howard when he joined the production: play it safe, or else. Clarke is just barely okay as Qi’ra – she goes through the motions just fine, but doesn’t really manage to colour in the depth and darkness of her character beyond what is already there in the script. 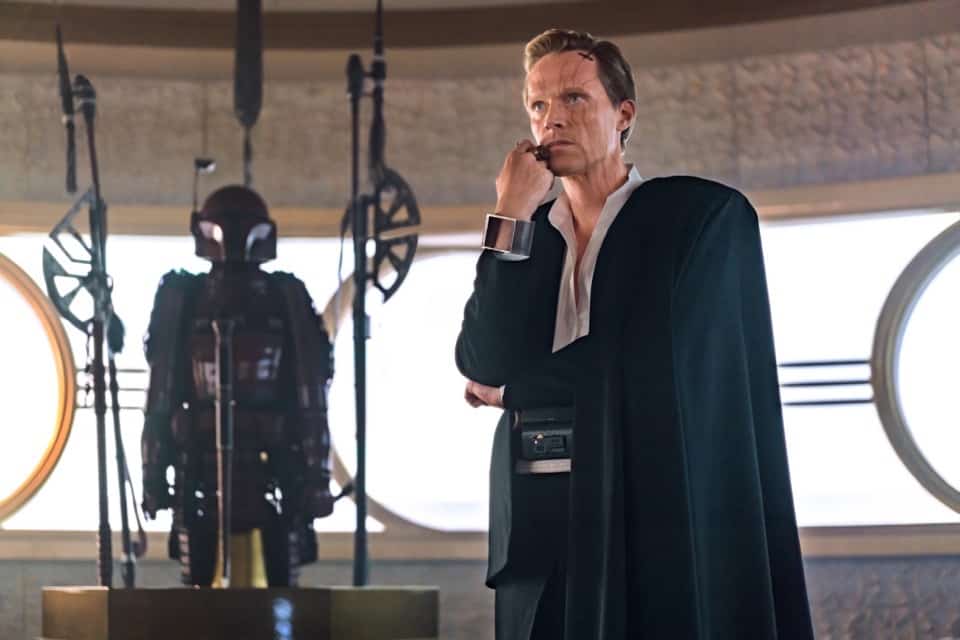 At least there’s fun to be had where Solo’s supporting cast is concerned. Glover and Harrelson both have charisma to spare, and you might be forgiven for wanting to watch films centred on their characters instead. Paul Bettany – a last-minute addition to the cast when reshoots prevented Michael K. Williams from returning – gives excellent villain as Dryden Vos, a snarlingly avaricious crime lord with a mysterious connection to Qi’ra. As Tobias’ wife, Val, Thandie Newton is fantastic, but tragically underused. 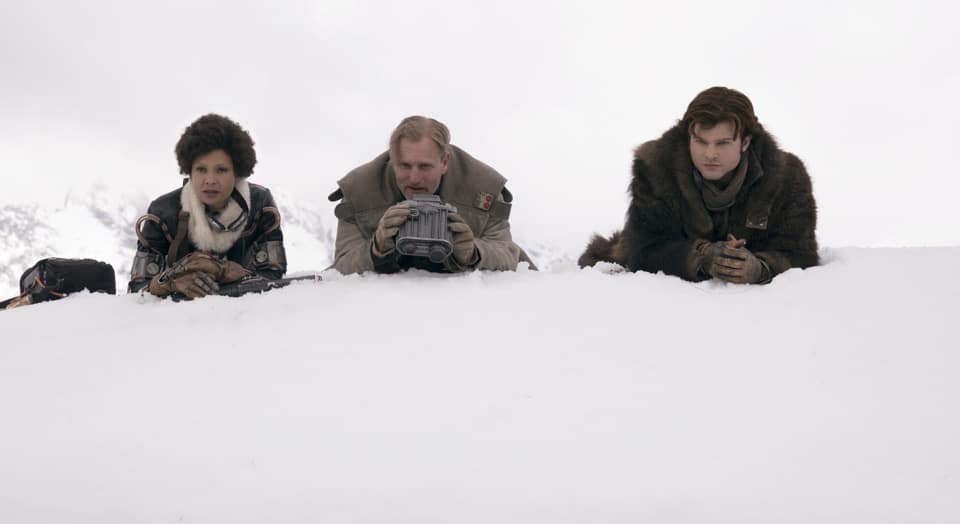 It’s odd to come to Solo: A Star Wars Story after the overwhelming success of the latest entries in the Star Wars cinematic franchise. All of these films have their detractors, of course, but The Force Awakens, The Last Jedi and Rogue One each demonstrated narrative courage: a willingness to commit to the fresh and unexpected, in order to tell an old story in a new way. Solo marches off resolutely in the opposite direction. This is a product hobbled by its heritage: cobbled together on the basis of and in tribute to past successes, with precious little insight of its own to offer.

Summary: A competent and watchable Solo adventure, but this incarnation of Han is unlikely to run away with your heart.