Basin CITY. A cesspool dripping with BLOOD and ALCOHOL and SEX and GRIME. A grimy CESSPOOL. NINE years after the FIRST movie, we RETURN. FOUR interlocking stories. “Just ANOTHER Saturday NIGHT” – Marv (Rourke) BEATS up PUNKS and hangs off the side of POLICE CARS. “The Long BAD Night” – Johnny (Gordon-Levitt), a self-assured young gambler, beats Senator Roark (Boothe) in a GAME of POKER. Big MISTAKE. “A DAME to Kill For” – Ava Lord (Green), sly WICKEDNESS taken the form of a WOMAN. She CASTS her SPELL upon former flame Dwight (Brolin) once more. Can he ESCAPE this enchantress’ GRASP? “Nancy’s Last DANCE” – stripper Nancy (Alba) is victim no MORE. She seeks to AVENGE the death of Hartigan (Willis), her PROTECTOR. AVENGING his DEATH. Her crosshairs are SET on Roark. 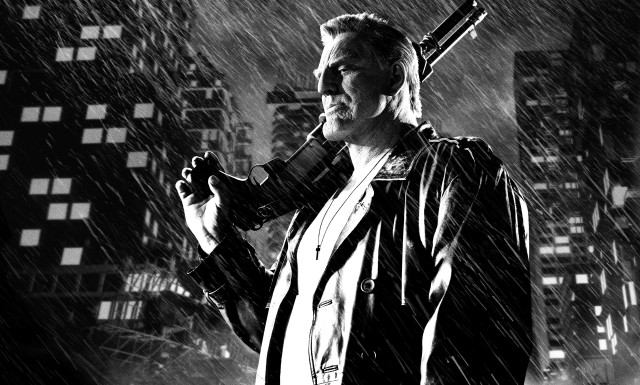 This reviewer had planned to write the whole thing in the style of Frank Miller but gave up after that paragraph. The first Sin City film broke its share of ground by hewing closely to the stylisation Miller had drawn into his graphic novels, using visual effects and cinematography to replicate the striking aesthetic of the Sin City books. Black and white with occasional violent bursts of selective colour, often lapsing into animated silhouettes. Miller was initially reluctant to allow an adaptation to be filmed, but Robert Rodriguez won him over and they became co-directors on both movies. It’s nine years later and it’s not quite so novel anymore. In-between then and now we’ve had the likes of 300 and the dismal The Spirit, the latter directed by Miller himself. It’s still a great gimmick and we bet this movie is stunning in 3D (we saw the 2D version). However, any gimmick can only carry a film so far. 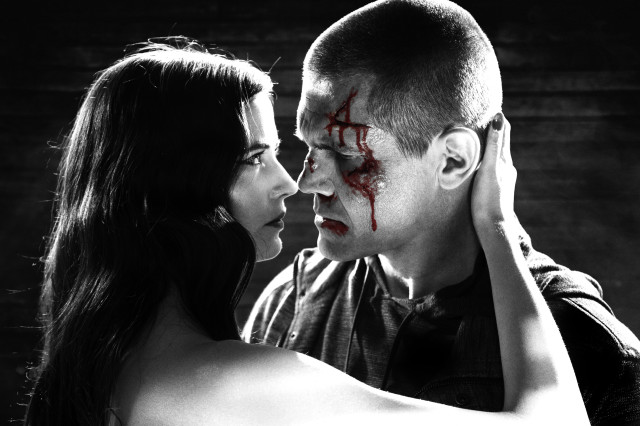 The movie is clearly striving for a noir feel but so much of the Frank Miller dialogue, in reaching for a hard-boiled attitude, comes off as laughably silly. “It’s another hot night. The kind of night that makes people do sweaty, secret things,” Dwight says in voiceover. When he gets kicked in the crotch, he describes it as “an atom bomb go(ing) off between my legs.” The intensity of all the brutal, wince-inducing violence in the film ends up being undercut by the writing. “A Dame to Kill For” has as its central character an evil, manipulative, often-naked seductress. Eva Green vamps it up entertainingly as is her speciality, but there’s not much more to Ava Lord than that – she’s a textbook femme fatale. The character’s speech about the nature of insanity and evil from the graphic novel, which would have added a layer or two, is cut. “Nancy’s Last Dance”, an original story written for this film, also undoes everything the character went through in the first film. Nancy, that narrow beam of light that was able to escape the darkness of Sin City, is now just another avenging angel. “The Long Bad Night”, the other original story, is carried by Gordon-Levitt playing against Boothe but is never wholly compelling. 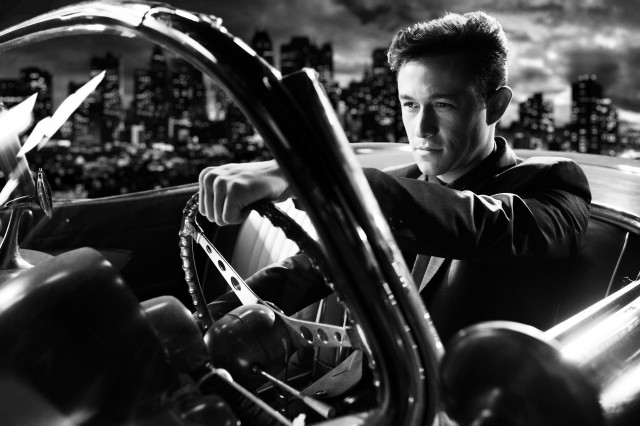 The film’s ensemble cast gets to play it up in ways few other movies would let them, to mostly entertaining results. Josh Brolin, playing Dwight before the character had plastic surgery to look like Clive Owen, is convincingly tough and grizzled. Powers Boothe is a hoot as a “love to hate” villain of the most extreme variety. Gordon-Levitt sinks his teeth into playing Johnny in his transition from cocksure and feeling untouchable to wounded and seething. The afore-mentioned Green, taking the role long-linked to Angelina Jolie, does look like she’s having a ball and seems extremely comfortable with the nigh-gratuitous nudity. Speaking of showing skin, Jessica Alba famously has a no-nudity clause but given Nancy’s get-ups in this film, she might as well be naked. Her attempts at playing an angry Nancy galvanised into taking up arms against Roark are ropey at best. Bruce Willis plays a ghost. Odd sense of déjà vu there. 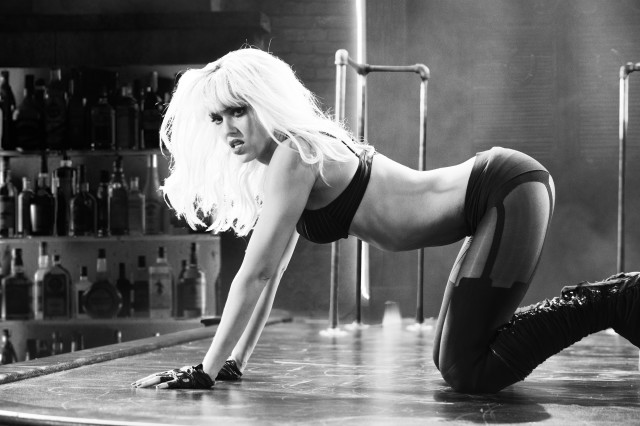 In 2005, before the full-on boom of movies based on comic books and graphic novels that we’re experiencing now, Sin City was unlike anything else out there. It was striking, bold and impactful. Now, the cool factor of the film being shot on a digital back-lot with everything but the actors and key props computer-generated has subsided. As over the top as A Dame to Kill For is, it falls short of the visceral oomph the first film had. Comic book fans know Frank Miller as a writer and artist who helped define the medium with the likes of The Dark Knight Returns and Batman: Year One, but who seems to have lost his mind, judging from the atrocious likes of Holy Terror and All Star Batman and Robin. His misogynistic attitudes and obsession with dark faux-poetry are on full display in Sin City: A Dame to Kill For, Robert Rodriguez serving as little more than his errand boy.

Summary: There’s no kill like overkill –Sin City: A Dame to Kill For brims with eye-catching imagery and uncompromising depictions of violence and sex, but there is little beneath its glossy, lurid surface.