We know what you’re thinking: Another film adaptation of a popular Japanese manga? Haven’t we already had a whole bunch of those last year? Can’t we have more Japanese films based on original storylines and premises? But from our point of view, we couldn’t care less, not when all of them are so damn good. Parasyte Part 1 breaks no new ground in terms of the strategy it uses to reel potential audiences in, but the novelty lies in its bizarre and thought-provoking source material, which we have to give props to Toho Pictures for even attempting to adapt. This is a film that disgusts as much as it delights, but the composite experience is peculiarly palatable in a way akin to eating durian: Get past the gore (or smell), and you’ll be duly rewarded. 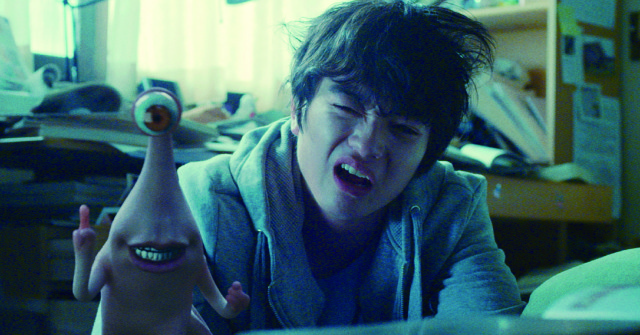 Based on the award-winning manga series of the same name by Hitoshi Iwaaki, Parasyte Part 1 chronicles the fallout after the infiltration of Japanese society by a host of parasites of unknown origin. These parasites lodge in and consume the brains of their exclusively human hosts (they’re particular that way), thereafter acquiring the ability to shapeshift into any form they desire. Sadly, they continue to have a craving for human flesh, which naturally results in an abnormally high number of suspicious deaths. For one particular parasite (voiced by Sadao Abe), though, its brain-chowing plans don’t quite work out and it ends up in the right arm of high school student Shinichi Izumi (Shota Sometani). The pair then has to learn how to work together for mutual self-preservation against a group of sophisticated and murderous enemies, quite possibly saving the entire world in the process.

Of course, any world-saving that Shinichi and his friendly parasite (who dubs himself Migi) engage in will have to wait for Part 2. Part 1 focuses more on the symbiotic relationship that develops between Shinichi and Migi and the changes in Shinichi’s life as a result of acquiring an autonomous talking hand. The exchanges between Shinichi and Migi provide a light-hearted contrast to the gruesome feeding habits and natures of the other parasites, and are the anchor which keeps the viewer engaged in spite of the occasionally graphic scenes of death and gore. And then there are the impossibly pretty Ai Hashimoto, who plays Shinichi’s crush Satomi, and the only slightly less pretty Shota Sometani himself. They provide easy distractions from the blood and guts if you’re the more squeamish type. 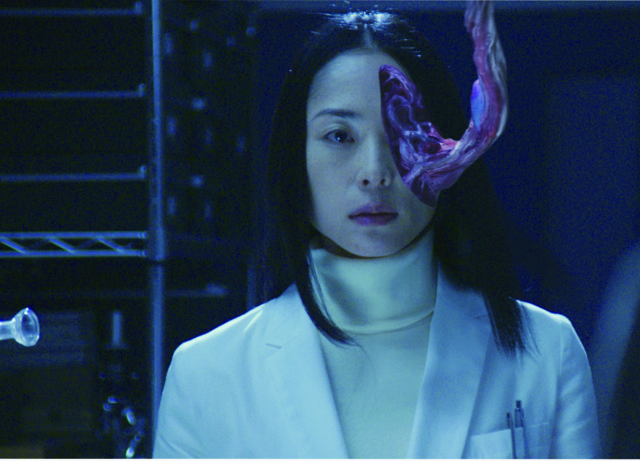 If you’re able to look past the mere shock value of the blood and guts, however, you’ll be more likely to be rewarded for your efforts. The violence never quite reaches Saw levels in the first place, and each moderately gory sequence brings up any number of interesting questions for the audience to chew on. Why, for instance, do the parasites kill? Are humans really any better than the parasites in terms of thoughtless butchering? Which kinds of life should be valued more than others, if at all? Far from being a schlocky creature feature, Parasyte will have you mulling over many of the conventions in society that we take for granted, simply because the parasites aren’t bound by them.

Fans of the manga will be pleased to note that while the film makes certain minor revisions in the interests of economy (Shinichi’s father is dead in the film, for one), many of the manga’s most memorable panels have been faithfully given the cinematic treatment, right down to the ominous opening monologue and the unforgettable first instance of a parasite literally biting someone’s head off. But perhaps the greatest cause for celebration for existing fans is the casting of Bayside Shakedown’s Eri Fukatsu as high school chemistry teacher cum parasite visionary Ryoko Tamiya. Fukatsu executes her role with Zen-like finesse, where a single fixed stare can convey anger, fear, confusion or even all three at the same time. It’s a tour-de-force performance that’s worth catching even if you have zero interest in flesh-eating parasites. 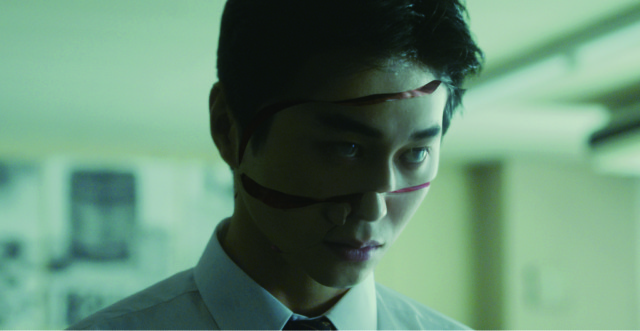 Our only gripe with Parasyte Part 1 is that it may be a tad too well-polished for such an offbeat and macabre subject matter. The marketing and promotional machinery behind the film shows its hand most clearly with some obvious sequel bait in the last couple of scenes, but that’s a small price to pay for what is otherwise a unique and pleasantly disturbing cinematic experience. And as much as we hate to admit it, the sequel bait worked. We can’t wait for Part 2 to be released in April.

Summary: If you’re one of those individuals who can put up with the pong to taste the succulent flesh (of the durian lah), this is the film for you.