No one would blame you for expecting the worst from Night At The Museum: Secret Of The Tomb. The first film was fun but hardly groundbreaking, and the second a rather forgettable retread. This final entry in the franchise could simply be cashing in before it cashes out: raking in some money at the box office from a holiday season crowd desperate for family-friendly, feel-good fare. What’s so unexpected is that there’s actually a zany spark of life to Secret Of The Tomb, one which makes the film a joy to watch – even if its plot is decidedly undercooked. 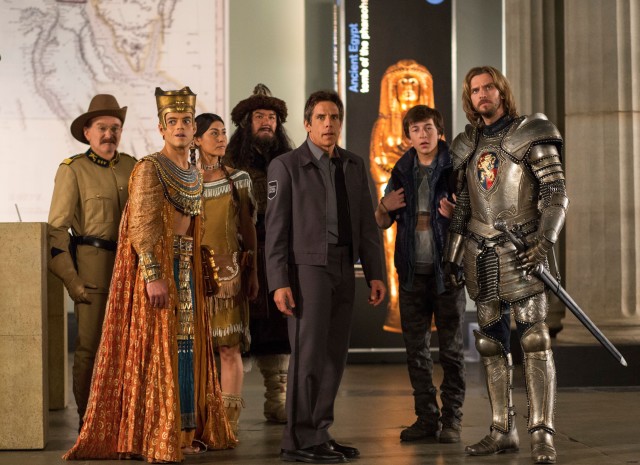 Larry (Stiller), the night watchman at one of New York’s finest museums, has been privy to its biggest secret for years. Every night, the enchanted Egyptian tablet of Akhmenrah (Rami Malek) glows and all the museum exhibits – from President Teddy Roosevelt (Robin Williams) through to pint-sized cowboy Jed (Wilson) and Roman gladiator Octavius (Steve Coogan) – come to life. But disaster strikes when the tablet begins to rust and the magic starts to fail. Desperate to keep his friends alive, Larry travels with a motley crew to London, hoping that Akhmenrah’s parents – currently on exhibit in the British Museum – can help make things right again.

Anyone watching Secret Of The Tomb for its plot (um, why?!) will be disappointed. The story is predictable and rather silly, draped as it is around a big, mysterious and ultimately anti-climactic family secret regarding the magical tablet. There’s a clumsy attempt to shoehorn some emotional growth and depth into Larry’s relationship with Nicky (Skyler Gisondo), his now college-age son who’s keen to take a year off to be a DJ in Ibiza. It’s hard to shake the feeling, too, that the script was cobbled together to give everyone in its hefty ensemble cast something to do – Jed and Octavius’ misadventures in the British Museum, in particular, are fitfully amusing but largely inconsequential. 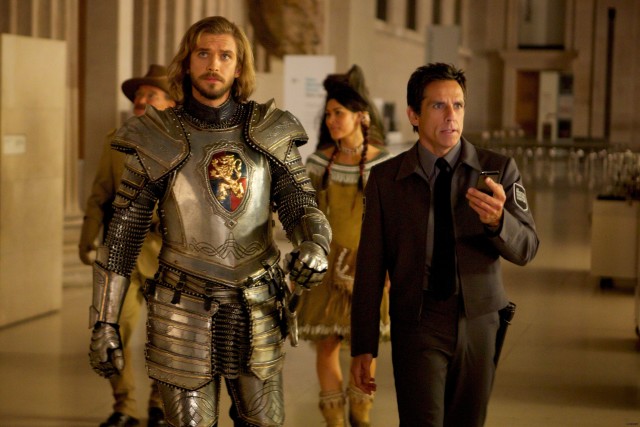 And yet, there’s such a lot of joy and heart to the proceedings that it’s easy to give into the film’s blithely silly moments – of which there are, thankfully, many. Chief among its delights is the addition of Sir Lancelot (Dan Stevens of Downton Abbey fame, showing off a surprisingly keen sense of comic timing) to the mix: the pompous, seriously pretty knight struts through the film with an outsized sense of purpose, and provides most of its belly laughs. We even get a wonderfully-imagined chase sequence set in the loopy twists and turns of an Escher painting, a biblical reference better than most of Exodus: Gods And Kings, and a star cameo so funny that it’s easily worth the price of admission.

The cast isn’t really called upon to do their best work, but they give it their all anyway. Stiller’s trademark brand of deadpan haplessness continues to amuse, as he literally pulls double-duty in playing both Larry and Laaa, his new Neanderthal doppelganger. Dick Van Dyke makes a brief but very welcome return to the franchise, as do Bill Cobbs and the late Mickey Rooney (in his last screen appearance). 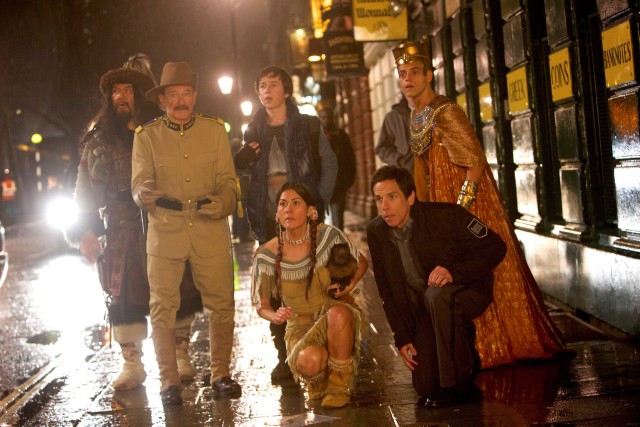 But the emotional heft of the film is really provided by Williams, who plays Teddy with such charm and warmth that you might find yourself tearing up at the most unexpected moments in the film. Each time Larry is forced to confront the possibility that his buddy Teddy might be frozen in wax forever, so too will the audience be reminded that they must savour the talent and energy of one of Hollywood’s finest comedians in one of his final movie roles.

Franchises like Night At The Museum are simply not intended to set the cinematic world alight with their brilliance and intelligence. But it’s nice to see that, at the end of this particular franchise’s run, its creators still harbour quite a bit of love for the oddball characters who – quite literally – come to life onscreen. Indeed, the resolutely family-friendly Secret Of The Tomb is at its best when Larry fights to save this surrogate family he’s found with a little bit of luck and magic.

Summary: Hardly groundbreaking, but a charming and, at times, bittersweet final chapter for the franchise.