When it comes to gigantic blockbuster franchises, the law of diminishing returns typically applies. Each new film somehow manages to be bigger and dumber, while also offering audiences pretty much the same experience that raked in the box-office bucks in the first place. That’s why Jurassic World: Fallen Kingdom comes as a pleasant surprise. It’s far from perfect, with a screenplay that veers between breathtaking and breathtakingly silly. But there’s a lot of thought and quite a bit of bravery invested in everything on display: from story, character and thematic development, to where this dino-driven series can go in the future.

On the surface, the plot is simple enough: Isla Numbar, the theme-park island left abandoned in Jurassic World, is facing an existential crisis. A volcano is about to erupt, threatening to take with it the dinosaurs now roaming freely all over the island. Claire Dearing (Bryce Dallas Howard), now a dinosaur rights activist, convinces former dino trainer Owen Grady (Chris Pratt) to return to Isla Numbar and save what dinosaurs they can, including (but especially) fan-favourite velociraptor Blue. Before long, they find themselves entangled not in a rescue operation, but in an utterly grim, cynical criminal enterprise. 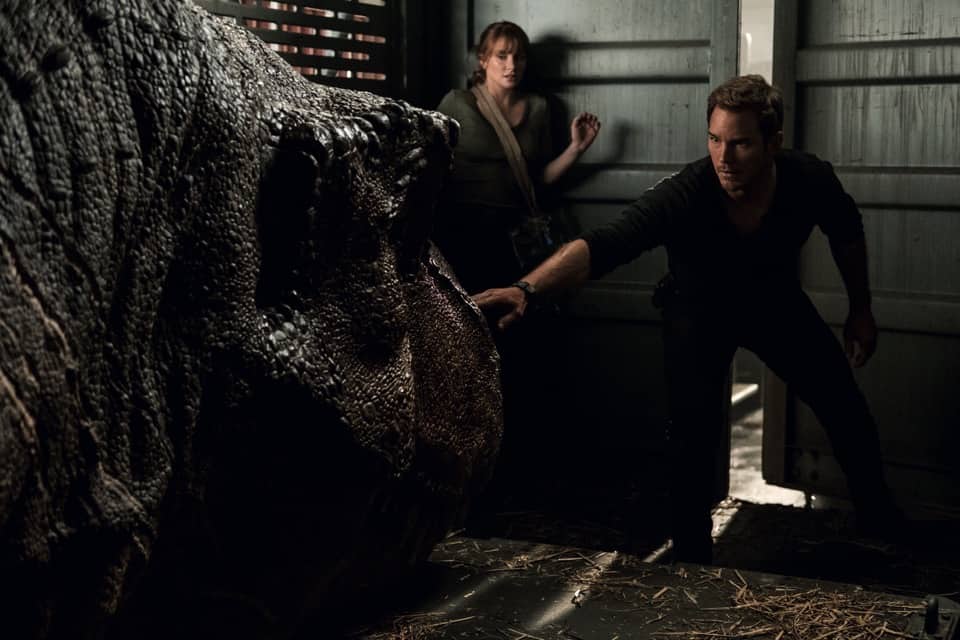 It doesn’t sound particularly groundbreaking, but what works refreshingly well is how Fallen Kingdom approaches the serious moral questions raised by the very premise of the entire Jurassic Park franchise. What happens when human beings play God, and bring dinosaurs back to life? How far can we push this power to manipulate genetic destiny? And do human beings have an ethical duty to preserve and protect a species that, by all the laws of nature, shouldn’t even exist?

Fallen Kingdom doesn’t just flirt with these questions, as its predecessors did. It places them squarely in the foreground, however uncomfortable this may become for the film’s characters or audiences. Throughout its far stronger first half, the film continually asks us to ponder issues of complicity and responsibility in a complex world. It pushes the original idea behind Jurassic Park – a new-found ability to literally resurrect the past – to its logical conclusion, and asks again and again what happens when the things humans create take on lives of their own.

The film also benefits from director J.A. Bayona’s remarkable ability to balance the epic and the intimate, as showcased so expertly in his tsunami drama, The Impossible. At its best, Fallen Kingdom serves up grand moments so startlingly effective in emotional terms that they might make you cry – whether it’s Blue being, briefly, betrayed; or the sight of Isla Numbar retreating in the distance, the fiery backdrop for a sole dinosaur as it rages against the dying of the light. There’s a truly eye-popping technical masterpiece of a scene that features humans and dinosaurs tumbling down a landscape ravaged by flame and fire. But the top-notch, eye-popping visual effects aren’t the point. It’s what the scene means, how it makes audiences feel – hearts lodging in throats at the prospect of innocent lives lost.

As much as Bayona deserves credit for unearthing the heart and humanity in Fallen Kingdom, the screenplay by Colin Trevorrow and Derek Connolly deserves some praise too. It contains some canny decisions that strengthen the franchise and its characters going forward. Claire, in particular, actually evolves – once the park’s by-the-books operations manager, she is now a badass activist who dares to fight for what she believes is right. There’s a great deal of potential, too, to the new character of Maisie Lockwood (Isabella Sermon), the plucky young granddaughter of one of Jurassic Park’s co-founders.

It’s a shame that the film slips into dumb and dumber territory in its second half. There are a couple of excellent moments, dripping with the tension and horror of Bayona’s chilling directorial debut, The Orphanage. You can see what Bayona is going for: the appealing notion of turning dinosaurs into the proverbial monsters under the bed, a menace that could come for you in the safety of your own home. In this regard, the film’s new hybrid dinosaur – the Indoraptor – takes centre stage, although it doesn’t have quite the personality or appeal of either Blue or the iconic Tyrannosaurus Rex.

But Fallen Kingdom shrinks into itself once the action is transposed from the island to the Lockwood mansion. The nuance and depth of the first half largely disappears. Instead, the film ends up trading in the kind of huge, intelligence-free action sequences that belong in a lesser sequel – from characters (and dinosaurs) plunging in and out of bedrooms and across a shatter-friendly glass roof, to mercenary Ken Wheatley’s (Ted Levine) final encounter with the Indoraptor.

The film also makes some narrative choices that seem silly even on paper, much less on screen. Daniella Pineda’s spunky Zia Rodriguez is a fun addition as a paleoveterinarian – except she’s never encountered a dinosaur in her entire life. (Why didn’t they just make her a former Jurassic World employee, like Owen?) Similarly, the screenwriters demonstrate a bizarre disconnect from the real world when they put prices on the rescued dinosaurs – still insanely rare for being history made flesh – and come up with paltry amounts like $10 million each. (What criminal hijinks can you carry out for that amount of money?!) It makes the film’s avaricious antagonists, Eli Mills (Rafe Spall) and Gunnar Eversoll (Toby Jones), come across as pantomime villains instead of criminal masterminds.

For the most part, however, Fallen Kingdom works. For a summer blockbuster, it’s surprisingly thoughtful in examining the human – and dinosaur – condition. Its second half doesn’t quite live up to the promise of the first, but it’s still a fun enough romp. And the film ends as boldly as it begins. In completely re-calibrating the relationship between humans and dinosaurs in its final act, Fallen Kingdom doesn’t just make a sequel welcome – it makes one necessary.

Summary: Surprisingly brave and thoughtful as massive blockbusters go, though there are moments that will sorely test your patience.