AH BOYS TO MEN 3: FROGMEN is the top grossing movie for 3 consecutive weeks in Singapore since its release on 19th February, the first day of Chinese New Year. Besides being crowned the highest grossing opening weekend Asian movie in Singapore of all-time, the movie has already collected a stunning $6.23 million box office as of yesterday, 9 March 2015, within a short time frame of 21 days, surpassing the $6.2 million box office record set by AH BOYS TO MEN 1 in 2012

The film producers are overwhelmed and pleased with the impressive box office performance by the third installment of the popular AH BOYS TO MEN franchise. 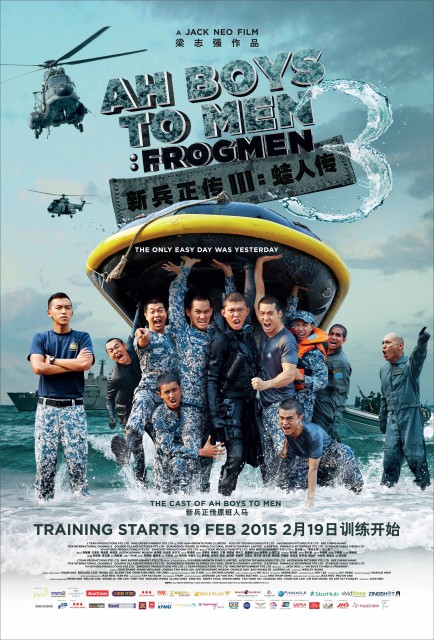 Director of the movie, Jack Neo says, “We are really very happy with the box office results! It is very encouraging that this movie has not only performed well at the box office, but has also received positive comments from the audience, which to us, filmmakers, is most important. The movie has already surpassed $6.2 million box office (AH BOYS TO MEN 1), we hope that it will hit $7 million by the end of this week and eventually the $8 million mark. I definitely look forward to another new record high . It is usually the toughest to break your own record. But I believe that if everyone is determined to work together, it will happen!”

Melvin Ang, CEO of mm2 Asia Ltd adds, “We’re very proud to have beaten the record set by AH BOYS TO MEN 1, especially in such a competitive environment, and we would like to thank the cinema exhibitors, partners, media friends, and of course, the audience, for their unyielding support. We hope this momentum will continue..”

To express their gratitude and appreciation to all who have supported the AH BOYS TO MEN franchise throughout these years, Singapore’s most popular army boys will be holding a mini outdoor showcase on 21st March, 3 PM Saturday at BUGIS JUNCTION, BUGIS SQUARE, LEVEL 1 – whereby the first 500 fans who presents a pair of  AH BOYS TO MEN 3: FROGMEN ticket stubs can receive an autographed poster from the Ah Boys on-stage).