Based on the premise that everyone lives three lives — public, private, and secret, Intimate Strangers follows a group of lifelong friends who gather for a housewarming party. When they decide to play “Phone Stack” with an added twist — everyone has to share every text message, call, email, or notification with the entire group — they start to realise that they don’t know each other that well.

Our smartphones are filled with some of our most personal and private information such as our schedules, contacts, emails, text messages, and call logs. We will never want to share everything we have in our phones with anyone — not even our closest friends, family, or spouse.

Yoo Hae-jin (A Taxi Driver) plays an extremely observant lawyer who pays attention to everything and everyone except his love-starved wife (Yeom Jeong-ah, The Big Swindle). Cho Jin-woong’s (Believer, The Spy Gone North) breast augmentation surgeon is the husband of psychiatrist Kim Ji-soo (Where Stars Land), both having regrets after their shotgun marriage 20 years ago. 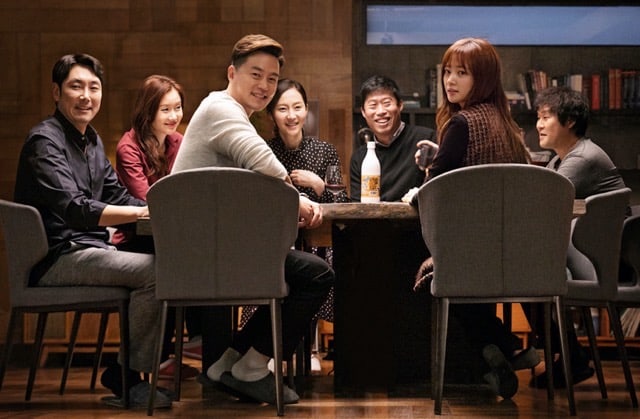 Lee Seo-jin (Love Forecast) plays an ex-Casanova who eventually settles down with a 10-year-younger veterinarian wife (Song Ha-yoon, Fight For My Way). Last but not least, Yoon Kyeong-ho (Goblin) is a divorcee who seems incapable of ever sorting out his love life.

Intimate Stranger hinges entirely on the performances of our the seven cast, undoubtedly, since 90 percent of the movie happens over the dinner table. If you think that sounds boring, you can never be more wrong. Director Lee Jae-gyoo and crew use a myriad of creative angles and cuts to focus on the cast while leaving subtle hints to each character’s secrets.

Furthermore, Intimate Strangers isn’t your typical Korean comedy movie — there are genuinely emotional moments that make you feel for the characters and not just for the sake of comic relief. The 115-minute runtime allows for emotional investment in all seven very unique and relatable characters, which will leave viewers (especially couples) reflecting on themselves.

You’ll expect childhood friends of 40 years have nothing to hide from each other, but there will always be shocking truths about the people closest to us. From cheating on spouses to backstabbing gossips of their closest friends, everyone has something to hide from everyone. If you like a novel and intriguing twist to your Korean comedies, you’ll love Intimate Strangers.

Summary: A Korean comedy unlike any before it, Intimate Strangers is an emotional rollercoaster ride that can make you laugh in a moment and cry in the next heartbeat.