You might expect a movie studio at the top of its game to play it safe – to stick to the tried-and-tested rather than to strike out in new, odd, bizarre directions. Certainly, it’s hard to imagine any other studio giving the greenlight to Guardians Of The Galaxy – a huge, clearly expensive blockbuster movie based on a title unfamiliar to anyone who isn’t a comics aficionado, starring a relatively unknown actor playing a character most people have never heard of. And yet, Marvel scores big once again with its willingness to head off the beaten track. Guardians is a fun, fizzy delight, even as it mines some surprising depths of emotion from its ragtag group of anti-heroes – all of whom really belong more in a jail than in civil society. 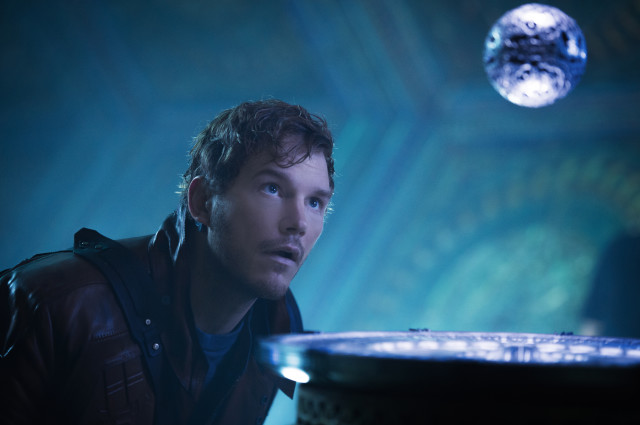 Peter Quill (Pratt) – a human abducted from Earth as a child – has grown up into an intergalactic thief who has no idea what he’s getting into when he takes possession of a mysterious Orb. All he wants to do is to sell it to the highest bidder. Little does he know that Ronan (Pace) – a ruthless, genocidal Kree radical – will do just about anything to get his hands on said Orb, including sending genetically-modified alien assassin Gamora (Saldana) after it. Gamora, as it turns out, has an agenda of her own. Trapped in an intergalactic prison (long story), Peter and Gamora are forced into an uneasy alliance with three other misfits: a brainy, sarcastic raccoon-like creature named Rocket (voiced by Cooper), a giant tree by the name of Groot (Diesel), and the solely vengeance-minded Drax The Destroyer (Bautista).

The truth is that there’s almost too much going on in Guardians. Not only are we introduced to a host of characters we’ve never met before, on a raft of new planets teeming with brightly coloured life and detail, we’re also introduced to several plotlines all stuffed somewhat awkwardly into the film. We have Ronan’s planet-destroying aspirations, which are somehow bound up with the evil plans of Thanos – that creepy purple-skinned dude who popped up at the end of The Avengers. Peter’s kidnappers turned surrogate ‘family’, led by blue-skinned bandit Yondu (Michael Rooker), are also on the trail of the Orb, turning up at moments both enormously convenient and inconvenient to the plot. It all makes sense in the end, more or less, but until it all clicks into place, it can make for a rushed, unsettling experience. 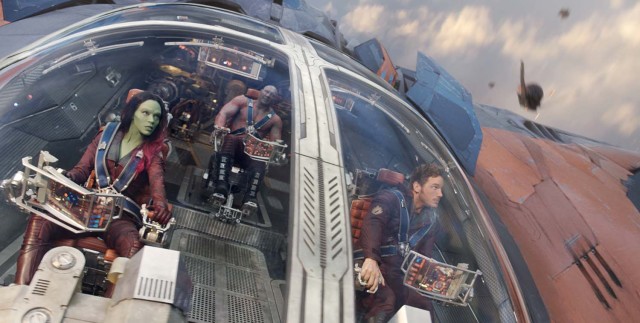 But there’s so much to enjoy in Guardians that it’s easy to forgive the film its occasionally unwieldy script. This is, by far, the most visually inventive and ambitious film Marvel has produced to date: it swoops from the homey interior of Peter’s rickety spaceship, equipped with an old-fashioned tape deck that ties him to his past, into the rocky alien vista of a discarded world, or the bustling streets of an outer-space hyper-market. The CGI – used to render gigantic mid-air battles, spectacular chase sequences in space, as well as turn Rocket and Groot photo-real – is beautifully done, adding to the bright, kitschy polish that characterises the film’s aesthetic.

Beyond the sheer look of it, Guardians triumphs because of the gang of scruffy losers (a term that will take on a different, more heartfelt meaning during the film) at its heart. Director James Gunn, who co-wrote the script, clearly feels a strong affinity for each one of these outcasts, all of whom are easily outlaws in some (if not all) parts of the solar system, each one battling – at least initially – to save his or her own skin rather than to save the world. It’s fascinating to watch the five members of this unusual, unlikely group trade disdain for respect as they slowly banter, bicker and batter their way into becoming a team. 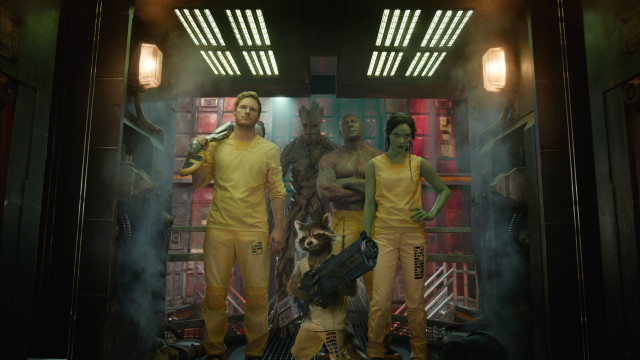 Most joyfully of all, Gunn never loses sight of the prickly, selfish side of his characters. He gives them plenty of rich, emotional moments – whether it’s Peter and Gamora bonding over the loss of their parents, or the fact that Rocket can read a whole range of meaning into Groot’s extremely limited vocabulary (‘I am Groot’) – but is always ready with a quip and a wink to keep the film from descending into dangerously sentimental territory.

In fact, Gunn pumps up proceedings with a healthy, hearty dose of humour. Films in the Marvel Cinematic Universe (MCU) have always been more tongue-in-cheek than the likes of the considerably more dour Dark Knight franchise, but Guardians is a heady trip of a different order. It practically delights in bursts of odd, subversive comedy, and actually dares to punctuate its most epic face-off with a sly homage to, of all things, Footloose.

Pratt – so winning a comedian in TV’s Parks And Recreation – holds the emotional and (slightly a)moral core of the film together. He exudes an easy, rakish charm that makes Peter both dashingly arrogant and achingly vulnerable. He’s matched very well by Saldana, who is clearly delighting in the opportunity to play the world-weary, no-nonsense Gamora – bred into a killer, born a fighter. The rest of the cast does justice, too, to the film’s cheerful swing from drama to comedy and back again: Bautista brings unexpected pathos to Drax’s occasionally comical determination to avenge his family against Ronan, while Cooper sounds completely unlike himself – in a very good way – as a creature who hides a world of hurt beneath his mouthy exterior. Even Diesel manages to find a great deal of depth in a CGI character who only communicates via the same languid burst of three words.

If anything, Guardians is let down by a trio of not particularly threatening villains. Pace snarls and spits in heavy make-up, but can’t quite rustle up much in the way of nuance or genuine menace. Ronan is a one-note madman, with so little in the way of backstory that he automatically becomes less interesting. Thanos, too, now voiced and performed in motion-capture by Josh Brolin, doesn’t get a whole lot to do beyond lounge on his space throne. Only Karen Gillan’s blue-hued cyborg Nebula manages a smidgen of complexity; even then, she struggles to be half as fascinating as her conflicted “sister”, Gamora. 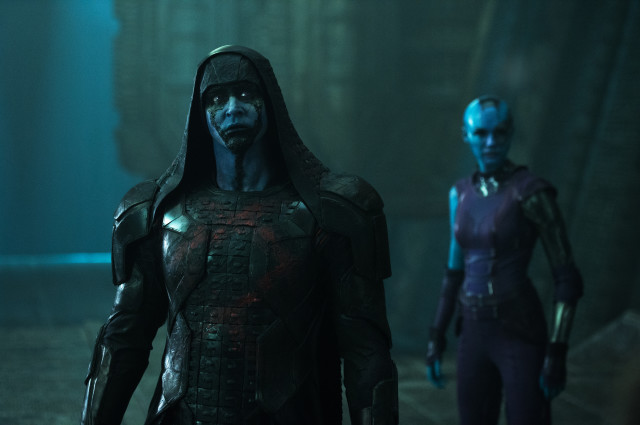 Before the film was even released in cinemas, Marvel announced that a sequel would be coming in 2017. It’s a no-brainer as to why. The film is smart, funny and quite wonderful on its own merits. But, even more crucially, Guardians is a gamble that pays off handsomely for Marvel. It opens up the MCU in, quite literally, all directions. Don’t be surprised if you see our more earth-bound heroes heading into the deepest, darkest reaches of space, sooner rather than later. Not only that, the film adds a new cast of wacky, loveable rogues to the MCU’s roster of characters: a gang who, one might say, are actually all the more heroic for being people who would ordinarily be running in the opposite direction from any galaxy-guarding duties. Frankly, we can’t wait to see what they get up to next. 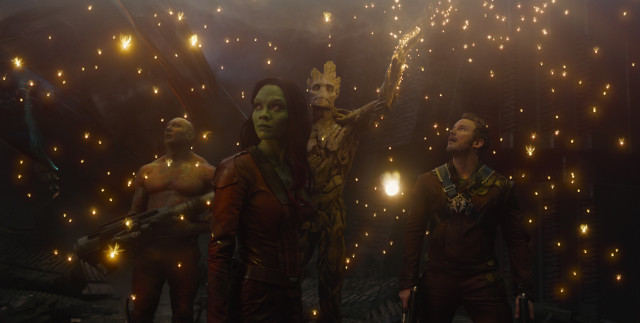