Pixar beckons us back fathoms below in the sequel to Finding Nemo. In real life, it’s been 13 years since the first film, but our story picks up a year after the events of Finding Nemo. Dory (DeGeneres), the blue tang stricken with acute short-term memory loss, begins to have flashbacks to her childhood, hitherto entirely forgotten. Dory recalls her parents Charlie (Levy) and Jenny (Keaton), and sets out on a quest to track them down. Dory’s friends, the clownfish Marlin (Brooks) and his son Nemo (Rolence), accompany her from the Great Barrier Reef to the Marine Life Institute in California. There, they become acquainted with the cantankerous ‘septopus’ (he’s lost an arm) named Hank (O’Neill); Destiny (Olson), a near-sighted whale shark who was Dory’s childhood friend; Bailey (Burrell), a beluga whale with self-confidence issue, and the sea lions Fluke (Elba) and Rudder (West). While Marlin wants nothing more than to stay home, he has to brave the unexpected yet again so his friend can be reunited with her family. 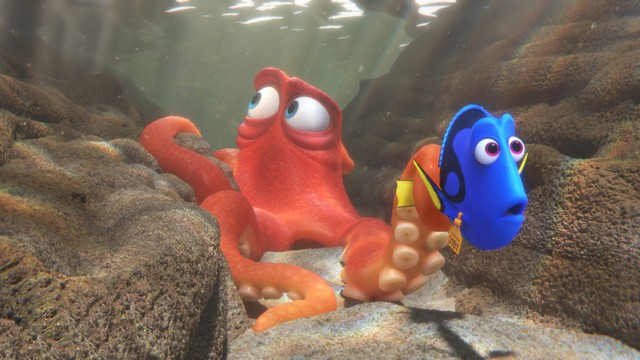 Over the years, DeGeneres has relentlessly lobbied for a Finding Nemo sequel on her talk show. Not only has she gotten her wish, Dory has been bumped up to the main character. In addition to voice actors DeGeneres and Brooks, director Andrew Stanton has returned. Stanton also co-wrote the screenplay with Victoria Strouse, with Bob Peterson and Stanton receiving a “story by” credit. There was always the danger of this being a mere retread of the first film, now considered a classic of contemporary animation. While it does cover some of the same territory and doesn’t arrive at the same purity of emotion that Finding Nemo did, the sequel is still packed with heart and offers entertainment by the tank-full.

Sequels have a tendency to lose sight of what made the first film work in their pursuit of being “bigger and better”. Finding Dory is actually smaller in scope than the first film, with most of the action taking place within the Marine Life Institute, modelled on the famous Monterey Bay Aquarium. As we’ve come to expect from the studio, the animation is awe-inspiring and suffused with life, the environments spilling over with realistic detail. The animators have a lot of fun guiding Dory through the various mini-environments within the Marine Life Institute and the action sequences have a dynamic theme park ride feel about them. Like its predecessor, it’s still a road movie: our heroes meet weird and wonderful personalities as they journey far from home in search of something, or someone. The story possesses a crucial forward momentum: there’s never a dull moment and the characters get from point A to point B in increasingly inventive ways. Not only is it fast-paced, it’s also frequently funny, with many jokes eliciting guffaws from this reviewer. A well-known actor who has appeared in a Pixar film before gets a riotous vocal cameo.

This reviewer was worried that Dory would be the latest victim of what we call “breakout character-itis”, wherein a supporting character becomes such a hit with audiences that their screen-time is massively increased in the sequel, sometimes to the film’s detriment. Dory’s appeal remains untarnished – much comedy is derived from the character’s ailment, but the film also recognises it as a source of profound tragedy, and this becomes the driving force in the plot. Dory’s back-story is established from the outset, and while it doesn’t quite tug on the heartstrings the way Nemo and Marlin’s bond did in the first one, there will still be no shortage of tears. Keaton and Levy bring understated warmth to the roles of Dory’s long-lost parents. 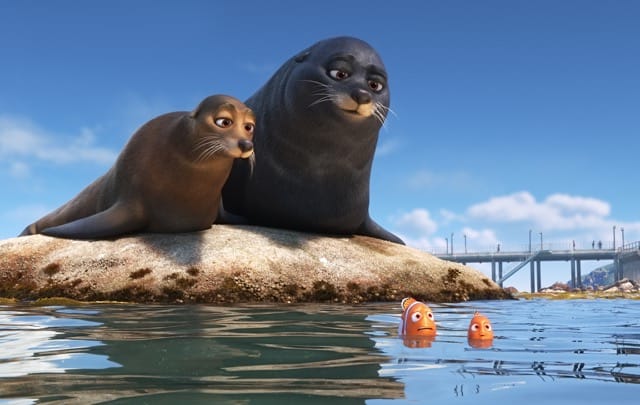 Marlin and Nemo receive just the right amount of character development: while they’ve both learned from their harrowing adventure, the essence of who they are remains unchanged. The pragmatism and impatience that Brooks brings to his performances ensure that Marlin remains an excellent example of the “comically serious” trope, while Rolence is as ideal a replacement for original Nemo voice actor Alexander Gould as any imaginable. Gould, now 22, has a vocal cameo.

O’Neill can play the curmudgeon in his sleep, and Hank is eminently endearing despite, or perhaps because of, his crankiness. Hank is the focus of many clever visual gags that make playful use of an octopus’ ability to contort itself and change its skin colour with the help of chromatophores to blend seamlessly into the background. Some of the other new characters, while often amusing, are not quite so memorable, and each of them have an obvious hook which seems like something a lesser animated film might fall back on. It’s always great to hear Elba’s distinct baritone, but he was better in Zootopia earlier this year. 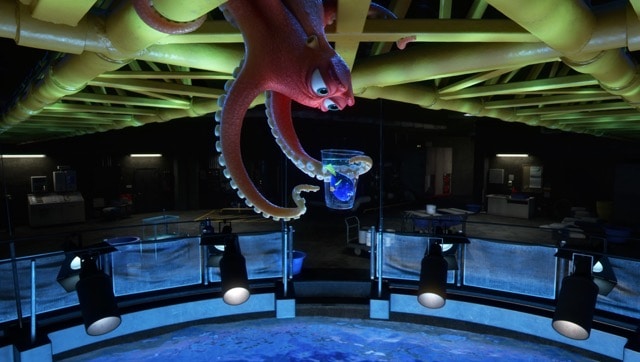 Finding Dory isn’t as good as Finding Nemo, but considering the stratospheric watermark that film set, it’s to be expected. This film reunites us with the characters we love, just as we remember them, plunged into zany new scenarios. Pixar knows how to reel an audience in, and there’s so much here to hook on to. The short film preceding the feature, Piper, is an exercise in straightforward storytelling, starring a particularly adorable feathered hero and boasting some of the most sublime computer-generated animation this reviewer has ever seen. Oh, stick around for a post-credits stinger!

Summary: Seek and ye shall find all those Pixar hallmarks: beautiful animation, humour, moving sentiment and family-friendly thrills. It’s not as profound as some of the studios other work, but it’s so entertaining that its shortcomings are easy to forgive.