It could be said that Old Hollywood’s Biblical epics were the big-budget superhero blockbusters of their day, with their casts of thousands and lavish sets. Cecil B. Demille’s The Ten Commandments is the codifier of that genre and now director Ridley Scott offers up his retelling of the story of Moses. 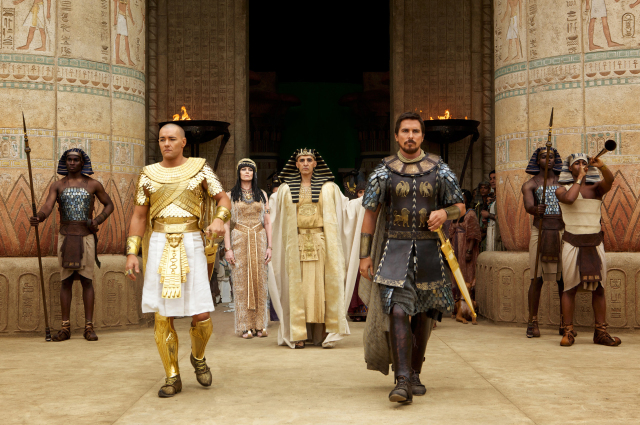 It is 1300 B.C. and Moses (Bale) is a general in the Egyptian army who has been raised alongside Prince Ramesses (Edgerton) by the Pharaoh Seti I (Tuturro). While on a routine survey at a work site, Moses is struck by how badly the Hebrew slaves are being treated. Nun (Kingsley) tells Moses the truth of his origins, that he was born a slave and raised by Pharaoh’s daughter. Moses is eventually exiled by Ramesses. He wanders the desert, becoming a shepherd and falling in love with the Midianite Zipporah (Valverde). After a dramatic spiritual encounter, Moses takes up the task of returning to Egypt to fight for the freedom of the Hebrew slaves. In the face of Ramesses’ stubbornness, God strikes Egypt with ten frightening plagues. Only after the most horrific of these calamities does Ramesses relent, but for Moses and the children of Israel, their journey has only just begun. 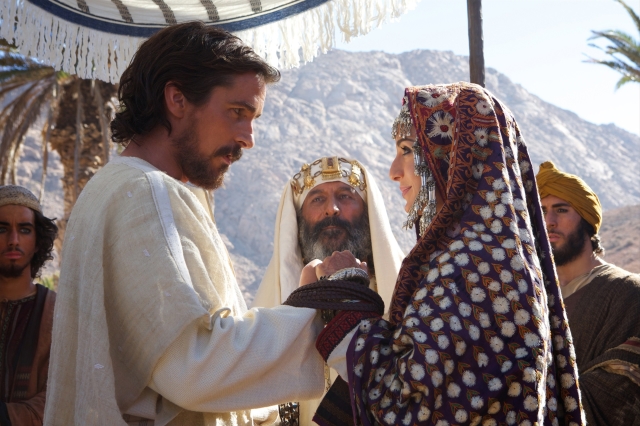 The story of Moses is a familiar one, the best-known films inspired by it being the afore-mentioned The Ten Commandments and the 1998 animated film The Prince of Egypt. Director Ridley Scott, who as the promotional materials are quick to remind us helmed Gladiator, delivers a not-quite epic. While the departures from the Biblical source material are not as outrageous as in Noah, it seems that Scott’s approach was to make more of a gritty swords-and-sandals flick than a grand, majestic Old Hollywood-style extravaganza. Perhaps this is meant to appeal to more cynical moviegoers but this reviewer was particularly disappointed that after being promised large-scale 3D spectacle, in this version, the Red Sea does not so much part as recede – off-screen. In trying to differentiate itself from earlier takes on the Exodus story, Exodus: Gods and Kings ditches one of the most iconic images in favour of a more “plausible” underwater earthquake.

Sure, this is a $140 million movie and there still is spectacle to be had. The film was mostly shot in the historic Spanish city of Almería and the Egpytian palace sets do look suitably imposing and sprawling. The highlight of the film is the sequence of the ten plagues, in which we get swarms of buzzing locusts in 3D. The first plague in Exodus: Gods and Kings, the rivers of blood, is brought about by a violent clash of a bask of monstrous crocodiles. There are also lots of flyovers of ancient Egypt and while the CGI does mostly look good and certainly took large amounts of effort to complete, it’s always clear that what we’re looking at is computer-generated, resulting in the nagging sense of a lack of authenticity. 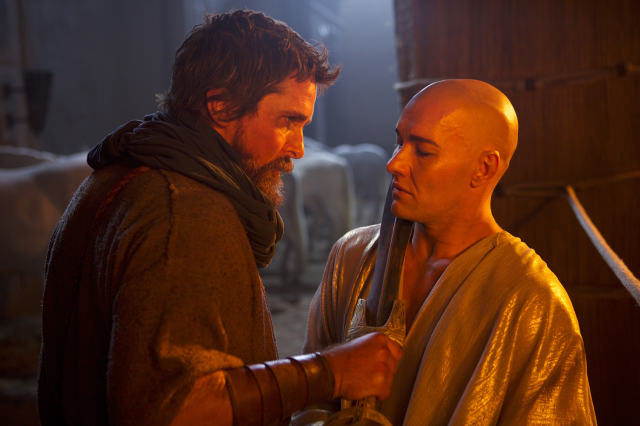 Much has been made of the “whitewashed” cast – suffice it to say that one wouldn’t find anyone who looked a lot like Christian Bale or Joel Edgerton in Ancient Egypt. Scott has defended this by saying the big-budget film would not get made without A-list stars in the leading roles. Fair enough, but for this reviewer at least, this further affects the authenticity of the film and pulls one out of it somewhat – not to the extent of the film adaptations of Prince of Persia and The Last Airbender, but still in that unfortunate vein. 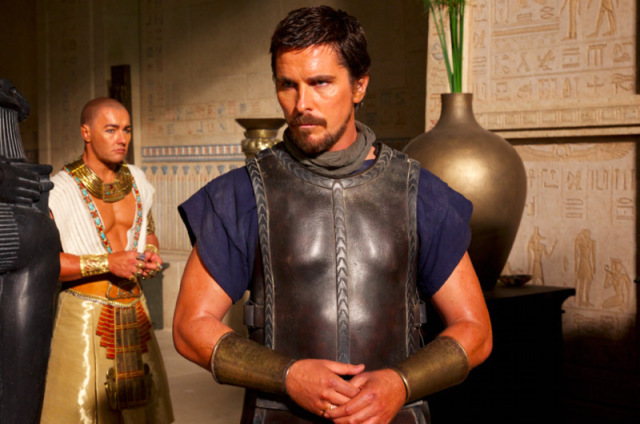 Christian Bale is now the second former Batman to play Moses, after Batman Forever’s Val Kilmer voiced the titular Prince of Egypt. More emphasis is placed on Moses as a warrior, the film opening with a battle sequence in which the Egyptian army storms a Hittite encampment. Through most of the film, Moses comes off as weary and confused, with the heavy implication that his encounters with God might merely be delusional episodes. However, he’s still plenty heroic and steadfast and there’s enough of an old-school leader in this interpretation despite the modern “flawed hero” approach. Joel Edgerton seems visibly unsure of how over the top to go with his portrayal of Ramesses, conflicted as to how much scenery he is allowed to chew without going all-out ridiculous. In the end, this pales in comparison to the clash of titans between Charlton Heston and Yul Brynner. The “brothers-turned-enemies” relationship was also drawn more compellingly in The Prince of Egypt.

The supporting cast barely registers, with Sigourney Weaver getting a total of around five minutes of screen time. Ben Mendelsohn’s campy turn as Hegep is entertaining but seems slightly out of place, even given the flamboyance associated with Ancient Egyptian royalty. As with most of Ridley Scott’s films, there will probably be an extended director’s cut released and perhaps we will get more characterisation in that version. At 154 minutes, this theatrical cut is still something of a drag. The “event film” of the holiday season has its awe-inspiring moments but alas, they are few and far between.

Summary: “Underwhelming epic” sounds like an oxymoron, but that is the best way to describe Exodus: Gods and Kings.