Michael “Eddie” Edwards (Egerton) always dreamed of being an Olympian. Since childhood, he’s been repeatedly told by many, including his father Terry (Allen), that he’s just not cut out for sports. And it all went downhill from there, so to speak. Against the wishes of his father but with the support of his mother Janette (Hartley), Eddie sets out to a ski jumping camp in Garmisch-Partenkirchen, Germany to train. He is mocked by the other more experienced jumpers at the facility, but catches the eye of drunken snowplough driver Bronson Peary (Jackman). Bronson was once a member of the U.S. ski jumping Olympics team under the renowned coach Warren Sharp (Walken), but was later seen as a disgrace to the sport and became an alcoholic. Eddie convinces Bronson to coach him so Eddie can qualify for the 1988 Winter Olympics in Calgary, Canada. Dubbed “Eddie the Eagle” by the media, Eddie has to prove to the world that he’s a serious contender and not merely the silly underdog.

If the term “feel-good movie” makes you roll your eyes, you’d be better off giving this a wide berth. Eddie the Eagle is a film that revels in its cornball sensibilities and adheres to all the sports movie clichés in existence. The jaded might scoff at it, but there’s definitely something very appealing here, you’ll just have to wade through the schmaltz to get to it. Most of us know what it’s like to be rejected or told we’re not good enough at some point or another, and Eddie’s irresistible combination of perseverance, chutzpah and endearing goofiness make him exceedingly easy to root for. 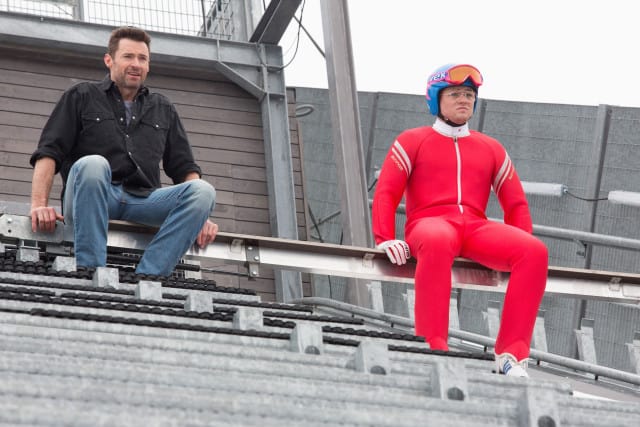 This is based on a true story, but the real-life Eddie Edwards has publicly stated that the film is only “about 5%” accurate. We completely understand the concept of dramatic license, but the liberties taken with the facts do make Eddie the Eagle feel inauthentic. There are many moments when the film comes off as cartoony, particularly in how all of Eddie’s fellow skiers, even those on the British Olympic team, are depicted as exceedingly stereotypical bullies. There’s no doubt that the real Eddie faced considerable obstacles in pursuit of his dream, but the underdog-ness is dialled up to the point where he might as well have to fend off an actual dragon on the way to the 70-metre jump.

The biggest fabrication is Jackman’s Bronson Peary, a character created from whole cloth by screenwriters Simon Kelton and Sean Macaulay. Edwards was actually coached by Americans John Viscome and Chuck Berghorn at Lake Placid; turns out they weren’t quite colourful enough for the filmmakers’ tastes. The swaggering Bronson’s glory days are behind him and he has the chance to make up for his fall from grace by taking on a protégé – yet more familiar tropes. That said, Jackman is extremely watchable in the role. He simply radiates charisma and reminds audiences yet again why he’s a bona fide movie star. He also excels at the several moments of physical comedy the character is given. 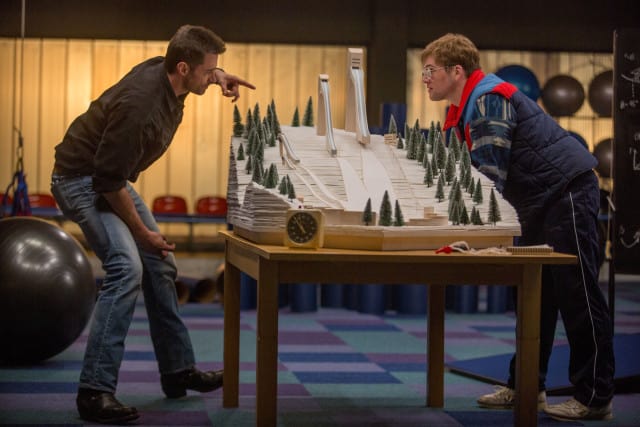 Egerton is poised to hit the big time after starring in last year’s Kingsman: The Secret Service; that film’s director Matthew Vaughn is a producer on this project. He piles on the “aw shucks” factor as Eddie and looks to be having fun playing the earnest, dorky, very unlikely national hero. Unfortunately, Egerton is prone to over-acting, though this can probably be pinned on director Dexter Fletcher too. There is so much squinting and lopsided grinning going on to emphasise the character’s awkwardness that it often feels like Egerton is merely mugging to the camera. This is yet another movie about a wide-eyed dreamer in which the mum is supportive and the dad completely isn’t, but we suppose that’s how it is in real life a lot of the time too. Walken’s barely in this; like Bronson, his character Warren Sharp is fictional too.

Famed second unit director Vic Armstrong stages some spectacular stunts, with professional ski jumpers re-creating some heart-stopping leaps off the ramp. The ’80s atmosphere is suitably evocative, amplified by Matthew Margeson’s synth-heavy score. Eddie the Eagle is spirited, entertaining and even genuinely thrilling in parts, but it’s hard to shake the niggling sense that everything’s been packaged a little too neatly and tweaked for maximum crowd pleasing effect. 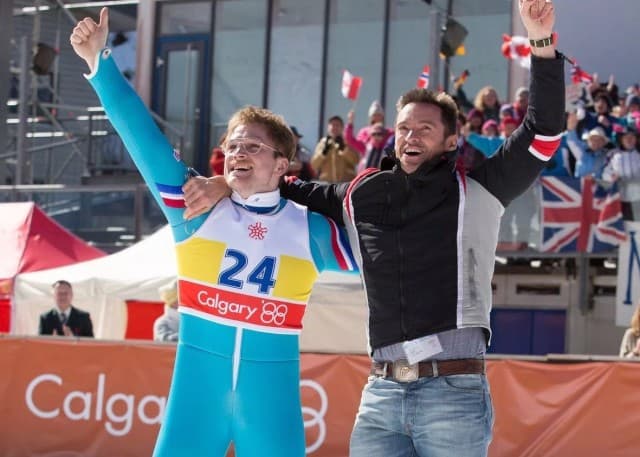 Summary: Eddie the Eagle will be too treacly for some and the staggering liberties it takes with the true story undermine it somewhat, but stars Taron Egerton and Hugh Jackman ensure it makes that landing.