Just as the museum’s Chairman Loh Lik Peng, SingPost CEO Dr. Wolfgang Baier and Minister of Culture, Community and Youth Lawrence Wong were about to officially open the exhibit, we were notified that one “Postman Joe” had been taken hostage by one of Batman’s enemies. By way of some audience participation, the crowd gathered in the museum was able to use the League Against Evil smart phone app to switch on the Bat-signal, summoning the Dark Knight. After he freed the innocent postman from the clutches of his rogues gallery, Batman stayed for photo opportunities with the kids in attendance.

The League Against Evil: A DC Comics Super Heroes Exhibition commemorates the 75th anniversary of legendary DC character Batman who first appeared in the pages of Detective Comics #27 in May 1939. The exhibit is organised in collaboration with SingPost, Warner Bros. and Pacific Licensing with other partners including G&B Comics, Right Here Media, DC Comics Super Heroes Store (J.T. Network) and Toonami. Visitors will be able to admire a selection of stamps, comic book art and collectible figures and statues.

Dressed in a Poison Ivy-themed outfit, senior curator Lucille Yap took us through the exhibit. Highlights include limited edition life-size busts of Batman and Superman, 1/6 scale models of the Batmobile from the 1989 Batman film and the Tumbler Batmobile from 2005’s Batman Begins as well as original artwork by illustrators including Adrian Syaf, Tan Eng Huat, Kelvin Chan and Soefara Jafney. 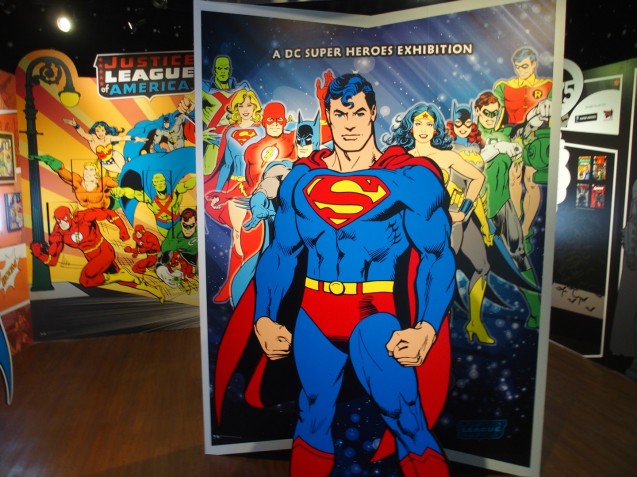 Dr. Baier said of the men and women who work for SingPost, “they are our unsung heroes for delivering mail to all of us through rain, shine, sometimes even haze.” He then commented that the new three-wheeler delivery vehicles are almost like Batmobiles.

Children and families will be able to participate in 3D printing and comic book art workshops, both of which require a separate fee. Visitors to the museum will also be able to take home a piece of the action by purchasing collectible MyStamp books, released by SingPost to commemorate the occasion.

The League Against Evil: A DC Comics Super Heroes Exhibition runs from 5 June to 31 August 2014 at the Singapore Philatelic Museum, 23-B Coleman Street, Singapore 179907. Admission is free for Singaporeans and Permanent Residents. For non-Singaporeans and PRs, the admission charge is $6 for adults and $4 for children.