Director Jon Chu and source novel writer Kevin Kwan rejected a gigantic payday offer from Netflix to roll the dice on the big screen. To the surprise of most, Crazy Rich Asians went on to make about US$34 million over its opening weekend and generated massive buzz, paying off the Chu and Kwan’s gamble.

Rachel receives some age-old advice from her mother (Tan Kheng Hua, Phua Chu Kang) including wearing all red to see Nick’s parents for the first time. When Rachel and Nick enter the first class suite of the plane, she suddenly realises her boyfriend of over a year is from one of the richest families in Singapore. 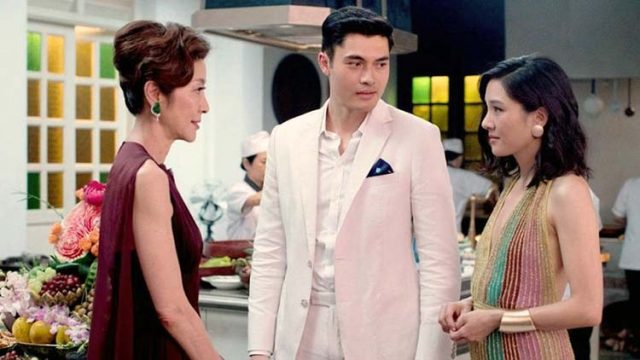 Michelle Yeoh (Crouching Tiger, Hidden Dragon) plays the cold but tender Eleanor Young, who nails the vulnerability underneath her iron-fisted household figure. Eleanor’s face-offs with Rachel perfectly portray the nightmares of meeting traditional Asian parents for the first time, the one thing most Asian viewers can connect with.

The rom-com aspect of Crazy Rich Asians is on point — some viewers with a soft spot for oh-so-sweet guys will fall for Golding’s Nick while the comedy parts are masterfully aced by Jeong, Awkwafina, and new-face Nico Santos, who plays Nick’s ‘rainbow sheep’ of the family cousin with several witty and quote-worthy lines.

Praises aside, some Singaporean viewers might find the movie a lacklustre reflection of the Singaporean culture. That said, Chu and Kwan know that this film is not the solution to misrepresentation, but it’s a bold and necessary first move.

By the measure of what Chu and Kwan set out to achieve with Crazy Rich Asians — getting a film centred on Asian characters on the big screen — it is a success. Asian Americans are even buying out theatres for special screenings. It will indeed be the new Hollywood film after 1993’s The Joy Luck Club to star an all Asian cast and is a box-office winner.

Yes, the movie is focused on a predominantly Chinese community rather than Asians in general, but it’s the first step towards opening doors for future variations of Asian stories in Hollywood about other Asian races.

Summary: The only Hollywood movie with an all-Asian cast since 1993, Crazy Rich Asians delivers in the rom-com aspect and is one of the most accurate Asian representations thus far on the international big screen.