The Low-Down: Two years ago, fans of cult horror films received the gift of Mandy, starring King of Weird Nicolas Cage. Cage reunites with Mandy’s producers for another outing into the land of the bizarre and unsettling, bringing writer-director Richard Stanley with him. 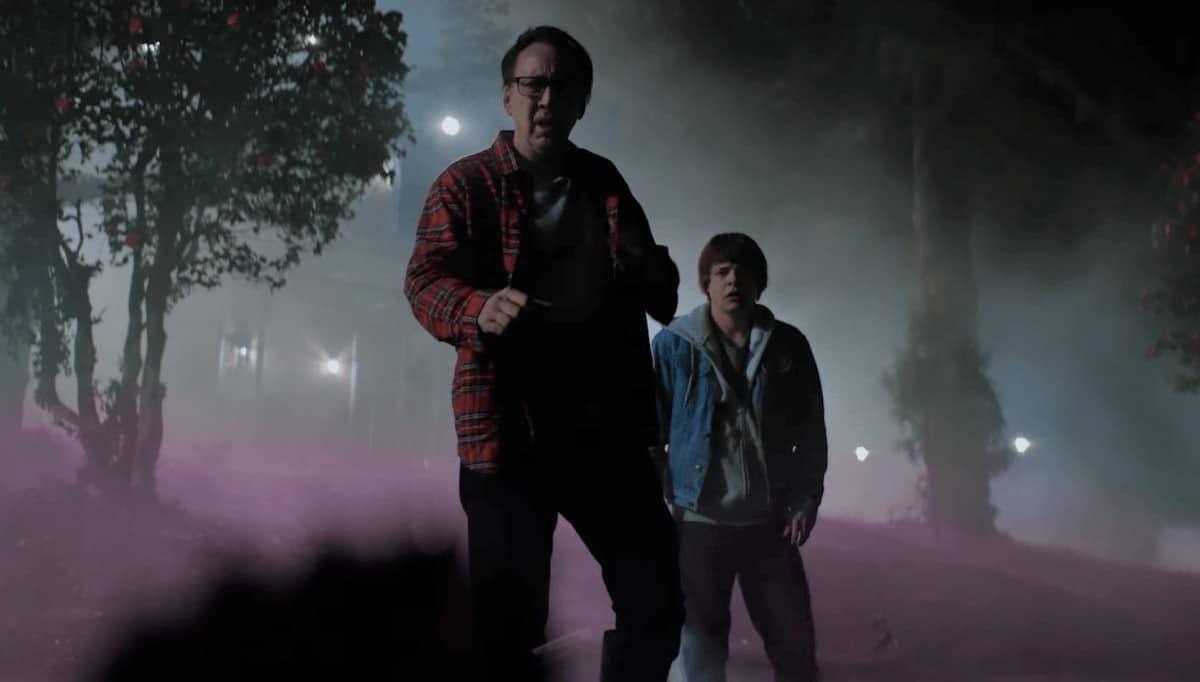 The Story: Cage plays Nathan Gardner, a man who lives on his family farm in rural Massachusetts with his wife Theresa (Joely Richardson), witchcraft-practicing daughter Lavinia (Madeleine Arthur) and sons Benny (Brendan Meyer) and Jack (Julian Hilliard). A meteorite crashes outside the Gardners’ home, unleashing an alien force known as the Colour that begins to mutate the living things in its proximity, warping reality itself. The Gardner family is soon consumed by madness as they are trapped by the Colour.

The Good: Richard Stanley has not made a narrative feature film since he was infamously let go from 1996’s The Island of Dr. Moreau; the tumultuous behind-the-scenes process is detailed in the documentary Lost Soul: The Doomed Journey of Richard Stanley’s Island of Dr. Moreau. It’s good to have Stanley back, and it’s clear that his eccentricities as a filmmaker make him a good candidate to adapt the work of the influential sci-fi/fantasy-horror novelist H.P. Lovecraft. Stanley demonstrates a love for and understanding of the source material, delivering both the mounting, paranoid dread and the gooey Cronenbergian body horror that an adaptation of The Colour Out of Space should possess. The practical creature work by 13 Finger FX is appropriately gross and stomach-turning. This is not a movie for the squeamish: horrible things happen to animals and children and there is a graphic scene depicting self-harm.

The Not-So-Good: While Stanley demonstrates a good command of mood and creates some entrancing visuals, the film’s dialogue is often unconvincing. One of the main things that makes Color Out of Space fall short of greatness is that none of the characters seem like real people, even though we spend a considerable amount of time with them. Joely Richardson puts in a serious, respectable performance, but it’s much harder to buy the Gardners as a family unit than it was to buy, say, the Abbotts in A Quiet Place as a family unit. 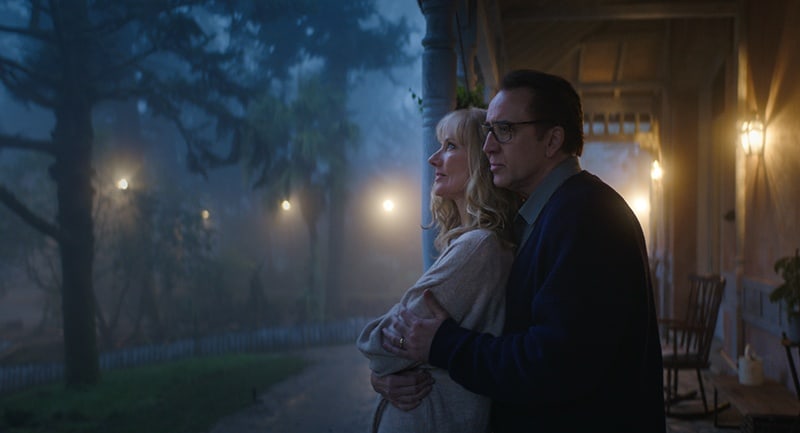 Nicolas Cage is at once the film’s greatest asset and its biggest liability. Stephen King disapproved of the casting of Jack Nicholson as Jack Torrance in the film adaptation of The Shining because the story was about a normal man’s descent into madness, and Nicholson already seemed crazed to start with. This problem is eminently present in Color Out of Space.

Stanley’s favourite film starring Cage is Vampire’s Kiss, in which Cage plays a literary agent who unravels after being convinced that he has been bitten by a vampire. This is the movie from which the “You Don’t Say?” meme is derived. Stanley asks Cage to do too much – few can freak out or melt down on screen the way Cage can, but this undercuts the terror that Stanley has carefully constructed, and the silliness of Cage’s performance sometimes prevents us from relating to the Gardners.

A subplot involving the haughty Mayor Tooma (Q’orianka Kilcher) doesn’t quite seem to go anywhere. Elliot Knight is a good straight man as Ward Phillips, a hydrologist surveying the area for a dam project, but like his equivalent in Lovecraft’s short story, the character functions as a narrator and doesn’t have much presence in the story. 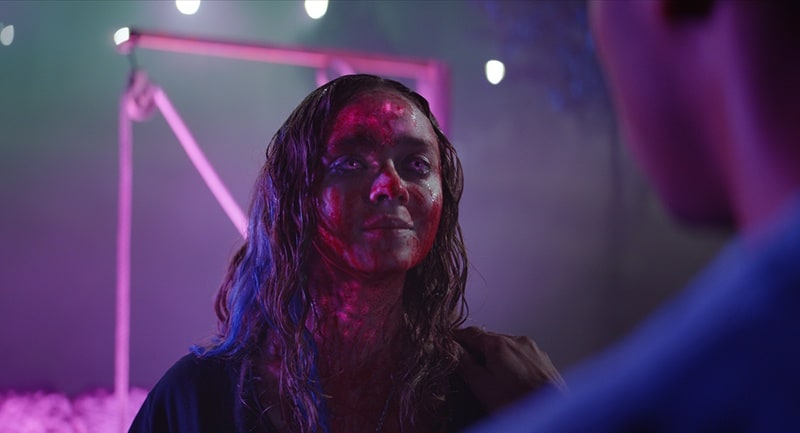 It’s also hard not to compare this movie to the other adaptations of the story, or even unrelated films that were clearly inspired by The Colour Out of Space. Annihilation is the most obvious recent example – what was called “the Shimmer” is basically the Colour. That film did almost everything this one does, just a little bit better. 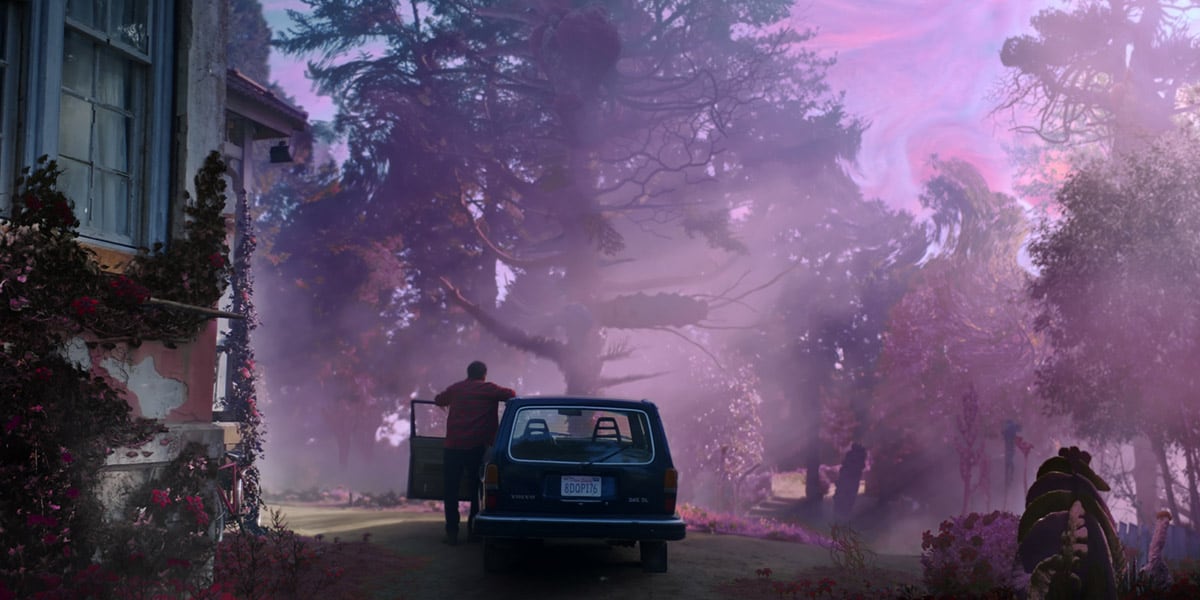 Entering Lovecraft Country: Stanley has wanted to make this film for a long time, announcing the project in 2013 and releasing a proof-of-concept trailer online that year. There are many little bits of world-building in this film that Lovecraft fans will notice – Ward wears a “Miskatonic University” t-shirt, referencing the fictional university that first appeared in Lovecraft’s Herbert West–Reanimator. Stanley intends to make a trilogy of Lovecraft adaptations, with The Dunwich Horror to follow Color out of Space. Considering how Lovecraft’s work is interconnected and taking the richness of the Mythos into account, there’s a lot to be mined here.

Recommended? Only if you’re a hardcore Lovecraft fan or really love small, weird genre movies. Even then, this asks more patience of its viewers than the average gory body horror movie.