Don’t be fooled by its English title. Chongqing Hotpot is far from a culinary-themed, feel-good flick where an irrepressible chef wins over everyone with mouth-watering cuisine. What it is, though, is a random hodge-podge of ingredients a la (you guessed it) Chongqing hotpot that blends bank heists, high school romance and gang fights into a single heady mixture. Depending on your diet preferences, you may find this mixture either confusedly appetizing or nauseatingly nonsensical. But just as hotpot ain’t exactly haute cuisine, you’ll find there’s still quite a lot of quotidian flavour to be savoured in Chongqing Hotpot if you just go with the flow.

Central to the film’s plot and happenings is, of course, a hotpot joint in Chongqing. This particular restaurant is co-owned by three longtime friends: Liu Bo (Chen Kun), Xu Dong (Qin Hao) and Four Eyes (Yu Entai). Business hasn’t been good, and the trio is thinking of selling the restaurant before further losses are incurred. While making some DIY renovations to the restaurant to entice potential buyers, Four Eyes accidentally discovers an entrance to one of the many bomb shelters dotting Chongqing. What makes this discovery of more than just historical interest, however, is the fact that the tunnel leads into the basement vault of a neighbouring bank, a bank where the trio’s former classmate Yu Xiaohui (Bai Baihe) coincidentally happens to be employed. The stage is now seemingly set for an episode of bumbling, lighthearted larceny. 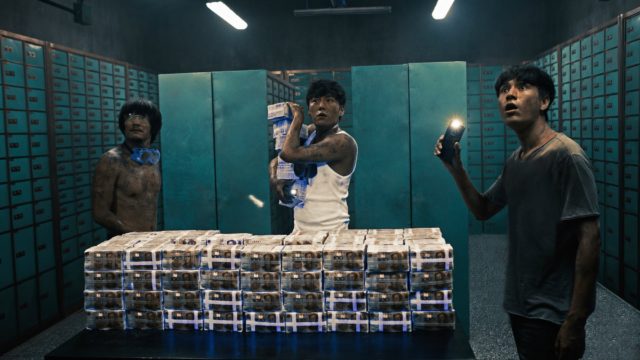 Except that it isn’t. Not really. While a heist is indeed central to the plot of Chongqing Hotpot, the film leads you off in so many different directions at once that you could be forgiven for not remembering what hotpot has to do with anything by the time the credits roll. The supposed bank heist in Chongqing Hotpot gets repeatedly sidelined by random plot tangents involving office rivalries, triad brutality, twenty-year-old love letters and overbearing mums/wives, to name just a few. Cantopop group Grasshopper’s iconic hit Alliance of the Heartbroken (失恋阵线联盟) also makes an inexplicable appearance. It’s like that time at reunion dinner when you put a piece of abalone in the pot and then failed to retrieve it because it got lost in the mess of everything else. The film is so all over the place that one can’t help but suspect that coherence wasn’t even aimed for during its conception. That, paradoxically, is the source of much of Chongqing Hotpot’s charm. Director Yang Qing has an uncanny ability to render chaos and incoherence palatable to logical minds. The film exudes so much anarchic exuberance that, after a while, crazy and random become the new normal. Some films tank because they try and fail to contain clunky narratives and multiple plot threads. Chongqing Hotpot doesn’t even try. You have got to admire the nerve of a film that segues from cerebral master plans to bloody gang fights to sentimental recollections of young love without so much as a carelessly contrived framing device. The film’s objective, it seems, isn’t to morally instruct, provoke discussion or even to tell a good story. Chongqing Hotpot just wants to have fun. A note of caution: Much of the film is spoken in the differently-inflected tones of Sichuanese Mandarin or in the local Chongqing dialect, which can make comprehension difficult even for Mandarin speakers. Ignore the subtitles at your own peril. More importantly, though, the film’s linguistic idiosyncrasies provide a much-needed anchor for its otherwise haphazard composition: the city of Chongqing itself. If, like this reviewer, all you ever associated with Sichuan was pandas and food, the film will open your eyes to a relatively overlooked region of China and the problems that continue to plague Chinese urban dwellers. Chongqing Hotpot occasionally veers tantalizingly close to socioeconomic commentary, but stops just short of any political statement of intent. Lead actor Chen Kun was born in Chongqing, which adds a nice touch of behind-the-scenes flavour, but at the end of the day, the film is limited by its own irreverence, proving to be no more than pure escapist entertainment.

Summary: Chongqing Hotpot is unabashedly popcorn-y, a veritable smorgasbord of elements representing cinema at its most entertaining and escapist (or some would say lowbrow and shallow). Leave logic at the door and strap in for the ride.